There's too many dogs in this tub 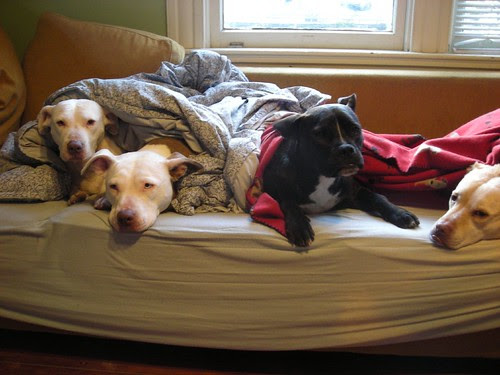 Does anyone remember the old Shel Silverstein poem?

I thought of it today while I washed five - yes, five - dogs. OK, I didn't wash them all at once or anything, but seriously - too many dogs in that tub consecutively made for one tired (and very wet) Mom / Foster Mom.

Four of the five are seen here on what used to be the couch and is currently known as The Best Dog Bed. I figure after torturing them all with a bath, the least I can do is throw a sheet over the cushions and let everyone (everyone who will stay still in a picture that is...) chill out and stay warm.

The "Dirtiest Dog" award went to Millie, who has a habit of throwing herself onto her back and wiggling for any other dog or human that she wants to show that she thinks they're pretty great. The "Most Compliant" award went to Pandora, who hops into the tub of her own accord (looking appropriately pathetic and martyr-like, of course). 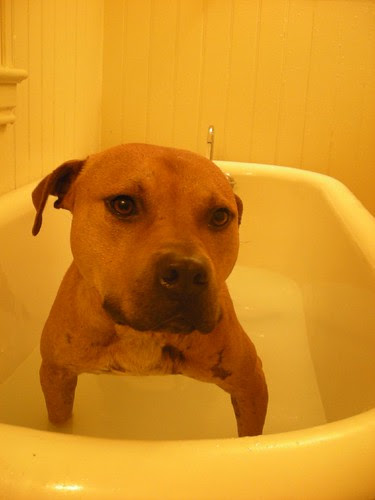 But the "Most Pathetic" award went, paws-down, to Hector.

Hector really hates baths, and from the way he pouts may think that I'm doing this for the sole purpose of tormenting him. After two failed escapes and a few more obvious motions toward the edge of the bathtub, he finally settled in and realized that this bath was going to continue with or without his blessing... oh, poor Hector!

Keep in mind that this is a Vick dog with a rock-solid temperament who shows no demons from his past and seems to just enjoy living in the present with no regrets or worries despite his previous abusive conditions and months in custody... that is, unless the living in the present includes the dreaded bathtub.

So Hector has his own strong opinions about baths, and since he has his own blog now with his other Vick Dog pals he decided to share them. 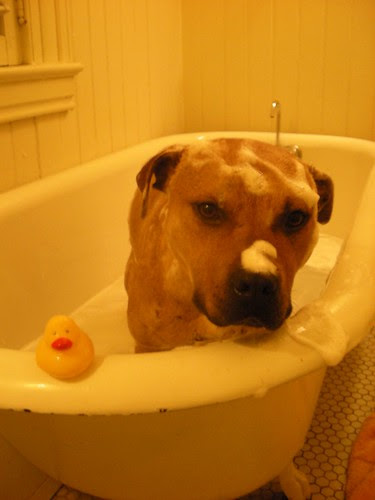 Anyway, 5 clean dogs makes for 1 dirty human, so after all that I decided to give myself a shower (since I wasn't up for cleaning the bathtub).

I was asked at Pit Ed class today what the hardest part of having 5 dogs around is, and I said "feeding time." I'd like to officially retract that statement - I forgot about bath time! Phew.

Anyway, everyone's clean and smelling lovely, and now we have some cute pictures of some very clean dogs to remind us that Cleanliness is next to Dogliness... but not without some human elbow grease.

And a lot of dirty towels.

Ah Millie,I can see all kinds of scars on you.
That`s sad but I see you`re having a whale of a time now.
Your friend looks like a ringer for Mac.I believe there`s even 1 blue eye like Mac had.
I don`t know what it is but you guys and gals tug at my heart right through the Internet.
I used to think people were a wee bit off for getting so attached to Mac via his blog but I`m starting to feel the same way about the dogs I`ve met(sort of met).
Great to see how happy you all are now.

Oh my god, Hector! His expressions are priceless. Look at those suds on his nose!

I will have to check out his blog.

I'm feeling the same way as Mac's Gang. I am addicted to these dogs! Alas, I have no TV at this time and missed the Rachel Ray show and have been looking for all I can find about it.

Regarding baths: Woe is me. Because I live in an apt (large enough), I take my dogs daily to the off leash park to hike in the woods and swim. My naughty Mocha and I are in a vicious cirlce. She rolls in dead animals and some kind of rank poop, therefore she gets a bath. So therefore, since smelling clean is so UNdesirable, she needs to roll in MORE dead animals and poop, therefore needs another bath. The circle goes on and on, unless EVERYTHING is frozen solid.

You have my sympathies! At least I only have 2!

There`s a poll running in the Toronto Sun on Ontario`s "Pit Bull" Ban.
http://www.torontosun.com/
The ban that kills Chocolate Lab mixes also.(I should mention)
I don`t know if you can post it but we sure could use some help.
Thanks if you can and if you can`t,I understand.
The results have just turned in our favor.

Total Votes for this Question: 5915

It must be Wash Your Pitbull Day. My pittie, Dottie just got a much needed bath this morning. It was a struggle to wash just 1 dog. I applaud you for wrangling 5. I love the pics.

When I got my first dog since high school (many, many years ago)and after 30+ years of cats, I naively had visions of my dog and I taking showers together or at the very least, enjoying bath time. This is not the case as Bella thinks I'm going to kill her....just say the word bath and she trembles (big bad pit mix here, huh). Then we got Petey, 58 pounds of dead weight when it comes to bath time. So I share your pain and am fortunate to be saved from myself by our condo association rules limiting me to 2 dogs!

The poll is over
Final Results

Total Votes for this Question: 7483

It`s not a huge win but it`s a win!
Thank you everyone.

hooray to you! i love bathed dogs getting warm on the couch!

Yeah! Macs Gang! A win is something grand! There will be more wins for you in the future, I know it :)

Baily hates baths. She won't go anywhere near the bathtub. Luckily once you get her in she stays until you are done.
Mesa isn't the brightest so she will willing go into the bathroom, hop in the bathtub and sit and wait while you get the shampoo and towels ready. The minute you turn the water on and start sudsing her up she freaks out as if it just dawned on her at that point that it is bath time.

Oh my god, Hector! His expressions are priceless. Look at those suds on his nose!

I will have to check out his blog.

I enjoy giving my dog a bath, we even take baths together but I suppose 5 dogs would be exhausting.