Rejection, bedbugs and a sliver of hope: Update on "About to be homeless"

An update on the ongoing search for a home that will accept Carol, Peter, their two sons and two dogs. Back story here: About to be homeless 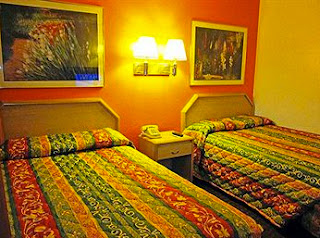 Scoring a dog friendly apartment for a low income family in crisis? We all knew it would be difficult, but the nitty-gritty realities can be rather discouraging. On the plus side, since losing their home, Carol and Peter have avoided sleeping in their car and have been staying in a Motel 6 thanks to the incredible generosity of people who read their story on BR's facebook page. The bill has been $600 a week, and we're rounding the corner into the fourth week now.

Rocco the dog is deeply bonded with his people so did not take well to being left alone in the borrowed dog run, set up in a volunteer's yard as a holding place while Carol and Peter were away at work. He panicked and tried to chew his way out through the chain link during their absence, so rather than risk a lost dog, they've found a friend who will stay in their motel room and pet sit while they're out at night delivering newspapers. Unfortunately the room also came with some unexpected guests: a scourge of bedbugs chewed them up while they slept. The management moved them to another room and comped them one night "for the inconvenience."

By CA law, families cannot stay in a motel beyond 21 days, so they now need to move all their belongings out and find somewhere else to sleep for one night and start the cycle again, or find a brand new hotel. They've spotted one with much cheaper rates down the road so are hoping to give it a go for the next couple of weeks. 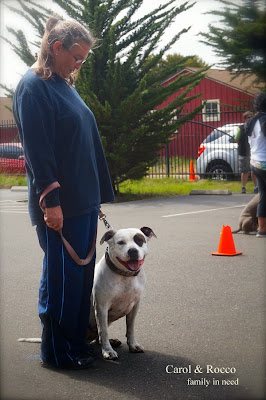 The apartment search has come with repeat frustrations. Each time they find what appears to be a workable dog friendly listing, they're asked to submit $35 non-refundable application fee. So far, they've spend nearly $400 in fees only to be rejected again and again. Despite these set backs, Carol has managed to keep a positive, upbeat outlook. She comes to Pit Ed class every week with the ever-improving Rocco and celebrates our homeless foster dogs' successes: Rhonda's new family signed adoption papers. Puddles and Nigel both moved into new homes. Harpo has a suitor. She smiles and cheers for their homecomings even though her own family is less than fortunate.

What's next? Peter is a veteran, so they've submitted paperwork for a loan to buy a mobile home so they can finally have a place to call their own. Everyone is keeping fingers crossed that they get approved. Carol's resourceful digging turned up a possible respite from the motel woes: Select veterans qualify for transitional housing which would put them in a real house until they can find something permanent. Will they get in? Another wait and see hurdle. Dogs aren't allowed here, though. Yet another problem to tackle.

On so many occasions we hear people say "I would sleep in my car before I'd give up my dogs." Would you? Could you?

Not a job for the faint of heart.

UPDATE: Carol, Peter, their sons and dogs have bumped the ickiness of low-budget hotels and are now renting a room in a pit bull friendly house. It's tight quarters, but temporary. They're working steadily on securing a mobile home and hope to have good news to report soon ... By Christmas maybe? We can hope.
UPDATE Feb 15: Carol and Peter's momth-to-month room situation ended and they are now sleeping in their car with Rocco the dog. The search goes on for a permanent home that allows pets. Landlords: They can afford up to $1200 a month, and while their credit isn't great, they both work full time. Their dogs are calm, older and well loved. Rocco attends our weekly classes and is a first class gentleman with all. Here's hoping...
Posted by Donna at 3:29 PM 20 comments: