We are so pleased to announce that another 'Vick dog' has earned her stripes as a therapy dog. Grace is one of the ten dogs that came to live with BAD RAP until she found her people. She just passed her Delta Pet Partners evaluation and will be on the job in about a month. We're so very proud of her foster parents and her new family for all they've done to show the world that even dogs from bad pasts can shine with a little help from their friends. 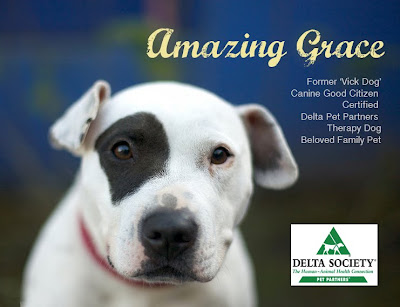 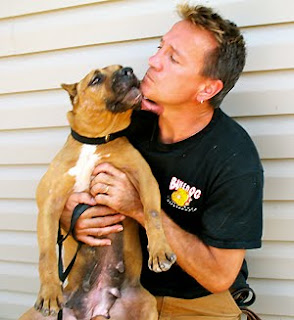 In other big news, one of the oldest dogs from the same case - Georgia - recently went home to a new family. She's been living at Best Friends Animal Sanctuary since arriving in Utah in late 2007.

She was one of our favorites so of course we're thrilled. Right: Georgia kissing Tim Racer during her evaluations with that tell-tale hanging tongue slurp that comes from having lost most of her teeth. She is a true character and impressed us with her warmth and strong sense of self. We hope she enjoys a happy and peaceful retirement living the good life.

News from Best Friends.
Posted by Donna at 5:46 PM 9 comments:

There has been quite a bit of talk lately about California Governor Jerry Brown’s intention to repeal significant portions of the Hayden Law in order to save the state approximately $23 million per year to provide funding to local shelters. If you haven’t heard about this, a little background would probably be helpful.

The Hayden Law was enacted in 1998 and, among other things, requires local shelters to increase the holding period of unclaimed animals – dogs, cats, rabbits, guinea pigs, hamsters, potbellied pigs, birds, lizards, snakes, turtles, and tortoises – for 4-6 days (rather than the then 3-day requirement) before the animal became the property of the shelter. It also requires these agencies to provide prompt and necessary vet care, nutrition, and shelter. Shelters must also post lost and found lists to help owners reunite with their pets. And, shelters – public and private – must keep records for 3 years on all animals it cares for, giving the dates the animal was held, the names of personnel who were involved, a description of any medical treatment, and the dates and circumstances of the animal’s final disposition.

The State determined that, in cases where the animal was ultimately euthanized by the shelter, the shelters’ cost to care for animals for an additional 1-3 days was a state-reimbursable mandate. For animals who were adopted or reunited with their owners, the cost was not a state-reimbursable mandate because owner-paid fees would offset the additional costs. According to the Department of Finance, these costs have been costing California $23 million a year, and Governor Brown now wants to repeal these mandates.

But, right now, local agencies aren’t receiving any reimbursement because former Governor Schwarzenegger suspended the these mandates in 2009. So, why the push for a full repeal right now when the State isn’t losing any money over it? If Governor Brown gets his wish and repeals the state-reimbursable portions of Hayden, what would the law look like?

Of course, supporters of the law say that repeal of these provisions doesn’t necessarily mean that shelters will change to meet the only minimum state standards. Local shelters can continue to comply with the Hayden provisions without reimbursement from the State. But, will they? I remember in 2004 wh

So, considering that the state-mandated reimbursements have been, and is currently, suspended, there is no a strong fiscal argument for a full repeal. And, the idea of supporting a full repeal without any comparable alternatives for our homeless animals is inhumane.

Please, take a minute to do one or all of the following:

EMAIL him (choose BUDGET as subject).