How many adventures can one little ghetto dog cram into a year?

In March '06 (Mile One), Chickie Sue showed up abandoned in an Oakland backyard in a crate too small to stand in. One year later - coincidentally the same month she appears on the Pit Bull Hall Calender - we're very happy to report that she's in her home! The months in between were a marathon involving dozens of people (ie, 'The Village') who worked steadily to keep this sweet princess alive and happy...from the Oakland Animal Control officer who saved her from a slow death, to the shelter staff who knows a good dog when they see one and put her up for adoption, then the dedicated OAS volunteers who walked her while she waited and waited for a home.

Mile Two - July '06 - No luck finding a home at OAS, Chickie Sue finds help with a BAD RAP Rep who drives many miles to gather the growing imp from the city shelter. She's home fostered for two weeks and entertained by resident canines while our Rep studies her character and teaches her some basics.

Mile Four - Nov '06 - Nine months after entering the shelter system, and no home in sight, Chickie Sue's optimism starts to wear down. Our hearts break as she shows signs of extreme kennel stress. She leaves the hall, but the Inn is full - No foster spots to be had and, not able to be kenneled any longer means Chickie Sue is in danger of losing her life.

Mile Six - Dec '06 - Enter several Chickie Sue fans who game plan to shuffle her in and out of a temporary home foster spot with a second BAD RAP Rep where she lives as illegal contraband (not allowed on the lease). Chickie has herself a ball with the non-stop fun of so many field trips and overnites in new places! But we hold our breath and wonder: How long can we keep this up before the landlord discovers the stow-away? Will her fan club lose steam? And, um, Why did we decide to do pit bull rescue again?

Mile Seven - Feb '07 - Lucky Seven....An application from Turlock CA comes in! So hopeful, but so far away. As always, we wonder: Will they be right for our party girl? Can they commit? And, how the hec are we going to know if this is a good match when they live sooo far from our weekly classes? Not to worry. Her new people take several long road trips from Turlock to classes in Berkeley to prove their interest and their commitment. And while their beautiful boy Brutis learns new manners, he and Chickie Sue (below) develop a most impressive friendship based on her favorite three letter word ... FUN!

Mile Eight - March '07 - Hoops jumped! Chickie Sue's people get the green light to take Girl Wonder home for a trial adoption. According to Brutis, she's right where she needs to be. Stay tuned for word on Mile Nine -- the finish line, natch' (final adoption).

Thanks to all who sent sponsorships and well wishes for this beautiful dog. Your support boosted us ALL.
Donna 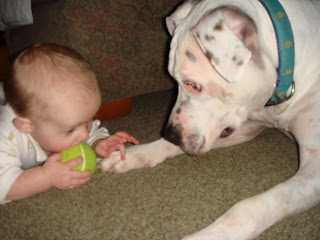 We met this older female in an east bay shelter. Her face will haunt us forever. She was depressed, neglected and very tired after a life spent pumping out multiple litters for her person. We couldn't save her (or the thousands just like her) and she was put to death shortly after this photo was taken. Her kennel run was immediately filled with another abandoned dog.

The CA Healthy Pets Act wants to help curb the cycle of overbreeding by requiring mandatory spay/neuter of all dogs and cats in CA, with exceptions. Please educate youself and everyone you know about this bill. It's the best hope we could ask for. AB 1634

Sammie Saves Her Kitty. Well...Sort of.

Some of you might recognize Sammie from our available page. She's a foster dog and special guest at Emily's home while she awaits her perfect happy ending. I represent Sammie for BAD RAP. Emily and I communicate a lot via email, helping Sammie hone up on her manners and checking in on her progress. Emily emailed me recently with news. I'll let her tell the story....

Sammie helped rescue our indoor only kitty. He managed to escape into the great wide world around 6pm and unlike usual he didn't come back after an hour or so. I looked all over the neighborhood but saw no sign of him.
Then, at 2:30am, I heard him screaming and bolted out of bed. Sammy was whimpering, but I left her in her crate to go look for him. I couldn't find him anywhere but kept hearing him crying. I would call him and he would call back to me, but I couldn't tell where it was coming from. I got back to the house and let Sammie out while I tried to think of what to do.
She paced up and down the hallway, still whimpering. So when I went out again, I took Sammie with me. Well, Sammie took me right to him about a block and a half away. Poor boy was trapped under a truck by a cat twice his size. We chased off the other cat and carried Sammie's kitty back with us. Minus a HUGE cut all across the top of his head and a few other miscellaneous wounds, kitty is fine. She and Don Juan (the cat) seem to have a special bond. She helps herd him back inside now if he slips out.

I don't know why, but once properly introduced, Sammie adores her cats. Even while in my home, she warmed up to my cat who'd be happy to dig his claws (and teeth) into the nearest dog face and just hang on. Here's a little more from Emily about Sammie the "kitty rescuer."

Sammie has an incredible passion for life and people. She is happiest when we have guests in the house and charms everyone she meets with her optimistic, enthusiastically affectionate attitude. She has a passion for tennis balls and flirt poles (anything she can chase) but also settles nicely at your feet while on the computer, crates beautifully, and is happy to snuggle up for a movie.

Check out Sammie and the other available BAD RAP dogs here. And if you hear a kitty screaming for help, it just might be Don Juan waiting for his knight-tress in a shining fur coat to come rescue him.

One final note. While we're thrilled that Sammie can live peaceably with a dog savvy cat, not all dogs can. For more information on pit bulls living with cats, check out PBRC's hand-out: Dogs and Cats

His name, for now, is Little Man. He has a funny underbite, a wildly wagging tail, and he represents hope to a whole lotta people.

I spotted Little Man during a recent tour of the Hillsborough County Dept of Animal Services in Tampa, FL. They were chosen by the ASPCA as a target city for a project called Mission Orange. This designation is a winning lottery ticket for any lucky shelter because it means they'll be receiving funds and expertise to help them meet the goal of limited euthanasia. Tampa has such an explosive pet overpopulation problem that the good folks that work at the shelter are forced to euthanize up to 100 animals a day, seven days a week, just to keep disease and overcrowding under control. The next day, dozens more animals will pour in the door, requiring them to start all over again by sending the previous week's animals to peace. Just imagine the toll this horrible cycle would take on your soul.

The ASPCA kindly invited us to help Tampa and other Mission Orange cities develop assessment protocol and adoption policies for their adoptable pit bulls and pit mixes. As of now, most aren't making it out the door alive in Tampa. Such an important project deserved an up close look to see for myself what they were dealing with. I've got a pretty thick skin, but I wasn't altogether prepared for the sight of so many perfectly wonderful but end-of-the-line animals. With our accessible spay/neuter resources and adoption programs, we've almost forgotten what this kind of hell looked like just a few years ago in bay area. Even more difficult, were the tears from some of the staff who were emotionally beat up, but still willing to hope for better days.

Which brings me to Little Man. While we toured the loud barking kennels, comparing notes by shouting in each other's ears, I spotted this little imp pressed to the front of his run, ears back, lip puckered out and wagging. He was way too skinny, filthy dirty and on his last day. I got that rush of excitement in my belly that comes from meeting somebody very special, so pointed him out and shouted to the staff "If he tests well, I want to take him home." He did, and we are. He's arriving in Oakland on March 20 and I just can't wait. Did I mention he has heart worm? - Sigh - Of course he does. What kind of a Hillsborough County mascot would he be if he didn't have an added challenge? With any luck, he'll spend the next few weeks getting healthy and strong and ready for adoption, and even more important, his hometown shelter will finally get the help and support that they deserve. Stay tuned for updates on this brave new project and its tail wagging mascot.

If you're a sucker like me and would like to meet this boy for adoption consideration, or perhaps sponsor some of his vet costs, please let us know. As always, thank you.

We're happy to report that Trish King sent word that she's pulled the controversial hand-out (blog below) out of Marin Humane Society's training materials. It was an interesting week full of back and forth emails between trainers, behaviorists and pit bull experts all over the country. Our mailboxes sure got a work out! I'm especially grateful to those who kept their comments calm and civil. I think our dogs would approve.

Donna
Posted by Bambi at 9:17 PM No comments: