To all our Santas, with love

Dogs that were once passed over as too broken to be helped have been passing milestones and making news. Here are a few must-mentions from recent days and weeks... 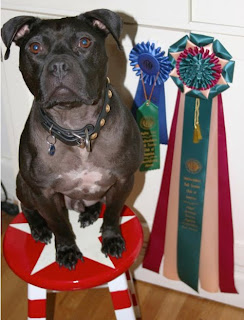 Audie - the Vick dog survivor who inspired the children's book listed in our sidebar- could care less about his past and is anxious to tear up the agility course now that his once-faulty knees are fully healed.

He competed in his first AKC sponsored show last weekend at the Staffordshire Bull Terrier of America Agility trial and did very well. Lookit that proud boy and his ribbons. Who would've guessed?

To add to his happy day, when Audie and his handler Linda Chwistek were driving home from the trial, they learned that Audie had been announced as the high scoring Novice Staffordshire Bull Terrier of the weekend. Not bad, little man! 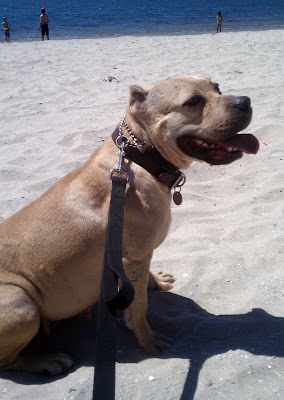 Pretty Gigi is finally home for good. She came to us via the large dog fighting operation known as the 'Missouri 500' bust, named in honor of the 500+ victims pulled from various dog fighters around the midwest in the summer of 2009.

What took so long to get home? Gigi's story is especially sad. She was one of several dogs who were hurt very badly by Missouri-based humane investigators who fought dogs during their undercover investigations in 2008. (Video and Story) Gigi's scarred body tells the story of numerous fights during the time period that she was owned by investigators. After they were done with her, she was transferred into our program along with nine other dogs - most of whom did not survive the transition to real life. Just a Dog Rescue in San Diego then opened their doors to her and provided ongoing support for her health care needs and rehabilitation. It was a rough road for this little one. She suffered from an advance case of heart worm and several injuries including the mental damage that comes from a life of mishandling and abuse.

Several months into her recovery, Gigi's foster parents confessed that they couldn't imagine being without her in their lives, and signed adoption papers to announce their commitment. She enjoys the beach as part of her new life, and attends Just A Dog's obedience classes to visit her old friends and forever saviors. Welcome Home, Gigi.

Please thank Just A Dog for all they did for Gigi on their facebook page: here 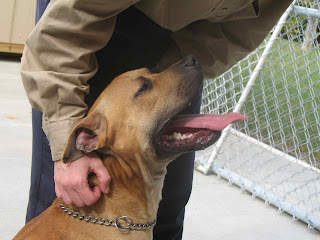 Leo - once known as Bouncer - has died of natural causes after several years of service as a therapy dog. He was the lucky resident of Hopewell Animal Control in VA when we met him - the only Vick dog in their shelter and a certain celebrity. Thankfully, he was never fought by Vick and received daily outings and kennel enrichment at Hopewell, all of which allowed him to streamline right into real life when he was transferred to Our Pack. He is one of five Vick dogs to have died since their rescue in 2007 and follows Aretha/Seven, Sweet Jasmine, Bonita and Red. He will be dearly missed by the world of Vick Dog fans. Right: Guardian Master Rebecca Huss enjoys Leo during his evaluations in VA. 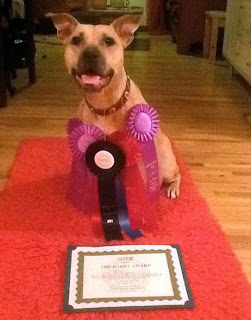 Mikey - another survivor from the Missouri 500 case - flew back to Oakland with us after we met her during our evaluations of dogs sent to the Animal Rescue League of Iowa. Full of spirit and drive, she was accepted into the Washington State Patrol as a bomb detection dog, but budget cuts in WA grounded her in Oakland. Not to be discouraged, she was adopted by our Ambassadog trainer Sara Scott, who has been competing her in nosework trials. Mikey recently earned her NW1 title in a nosework competition, along with the 'Harry Award,' which is given to rescued dogs who impress the judges. Way to go Mikey!

Another happy note: Inspired by the MO500 dogs who did so well post-rescue, the Animal Welfare League of Iowa lifted its ban on pit bull adoptions and has been enjoying great success and happy adoptions ever since 2010 through the ARL Pit Crew Club. Visit their dogs on this project's facebook page here.

Finally, ten of the Vick dogs including Hector, Jonny Justice, Uba and Teddles are appearing in the very luscious photo book by Melissa McDaniel. This edition of 'The Photo Book Projects' highlights pit bulls and pit bull type dogs. Melissa shot the dogs on a white background so viewers are treated to nothing but a big blast of DOG on every fabulous, glossy page. Her work is exceptional - We hope a copy lands in your hands so you can enjoy! More Info Here 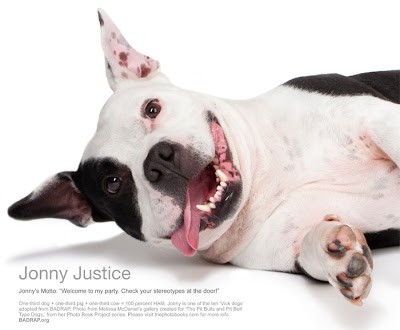 Home for the Holidays

Except for those cases where photo evidence is needed for cruelty charges, I don't have the heart to point my camera at dying or suffering dogs. I think it's unnecessary and rather exploitive and we see far too much of that in the constant "Save This Dog!" posts that get cross posted round and round and jam our mailboxes. But I bit the bullet and took this photo of Miss Birdy when she first came to us, hoping we'd be able to post it with a happy ending at some point. We are.

Birdy was found as a starving stray in late October - a Halloween skeleton, barely making it down a street in Oakland. A very lost dog or the victim of the foreclosure trends in Oakland? Possibly. Her finder was on her way to work, but pulled over without a second thought. She phoned for a friend to bring kibble - hurry! - and laid a bread crumb trail back to her car. Miss Birdy happily obliged and pulled herself in to the car, nearly dead from the starvation. (photo below after a week of food, if you know what I mean) 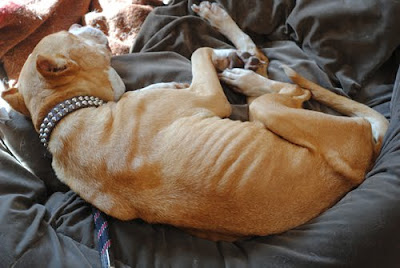 She did a detour in the parking lot of Oakland Animal Services where an officer winked the finder off to Berkeley Animal Care Services. And so off she went to BACS and then to our barn to enjoy many, many tiny meals, warm raincoats and new friendships. 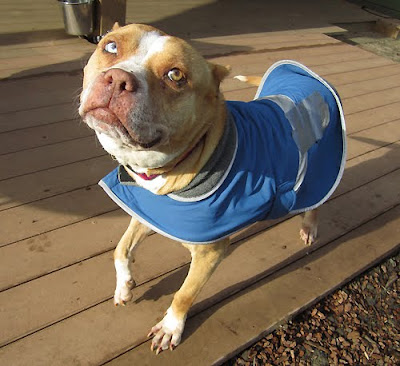 We hold our breath with dogs like this. She's a senior dog with a list of health issues, and we won't know 'who she is' until she feels better. Will she die on our watch? Will we have to make a difficult decision and let her go? How much should we budget for her care? How long will she need us and how do we plan for her? A veterinary exam revealed that Birdy has lymphoma, and while she isn't suffering, her days would be limited. Weeks? Months? A year or more? All we knew is that Birdy was very very grateful for any and all attention. She gained weight, demanded affection and even flirted a bit with the boy dogs. The longer she was with us, the more we realized we were helping a living dog, not a dog who needed us to fuss over her end. 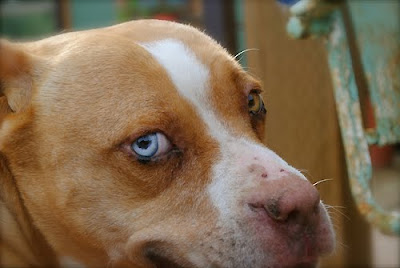 Here's the happy part -- And where I can finally justify taking that awful photo when Birdy was at her worst. The former street stray went home yesterday, and her adopter Anneke is just thrilled about her new pet. She asked, "What should I feed her?" My answer: "Anything she wants." They shared a burger on her way home from the barn, and we're quite sure they're going to be living a very, very nice life together. Miss Birdy is home and all is right with the world. 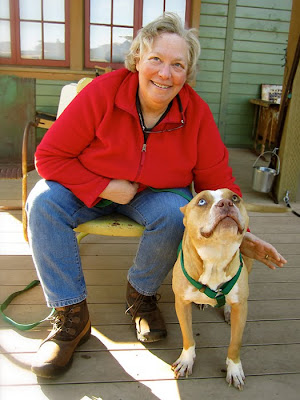 With many thanks to Erin G. for saving this girl when so many others kept on driving.

More (early) photos of Miss Birdy here from the very talented creator of the Love and a Six Foot Leash blog Thanks again, Aleksandra.

Anneke has promised us a blog of Miss Birdy's exploits, so we'll post that link here if and when she does. And more early niblets of our team helping Birdy get acclimated are lined up in our Barn Dog Blog.
Posted by Donna at 1:01 PM 17 comments: