Not surprisingly, my 18month old daughter, Piper, has a cold. I say not surprisingly because as a pediatric nurse practitioner I knew that her once a week preschool program would happily team up with cold and flu season to bring us a series of upper respiratory infections. Actually, I’m surprised that it took until mid December for it to start. Now that the first one has hit, I have a toddler who cannot sleep, doesn’t want to eat and is generally an unhappy camper. Before you parents out there conjure up sweet images of a sick baby cuddled up in momma’s lap, I refer you back to the title of this blog post. Where’s the love? 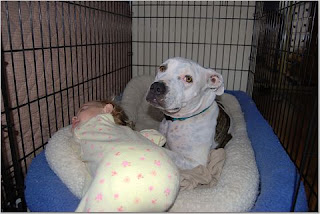 Apparently, the love is crated. Piper, who loves me and generally likes to cuddle, has, during this illness, often forsaken me for the comfort offered by the dog. The last few days, I’ve sat back and watched as my little girl made her way to my bedroom and curled up with her best friend inside his crate. Sometimes, the dog looks to me as if to ask if she’s OK, other times he lets out a large relaxing breath and falls back asleep with her draped over his back. It seems that there is something soothing about curling up in a crate with a pit bull. Actually, it doesn’t have to be in a crate, as far as Piper is concerned anywhere will do as long as she has her pit bull.

As cold and flu season wears on, when you find that you or your child isn't feeling well and Tylenol isn’t doing the trick, you might want to follow Piper’s lead and look for a pit bull to cuddle. Remember, as a parent you may have to occaisionally put your foot down and demand to be included. 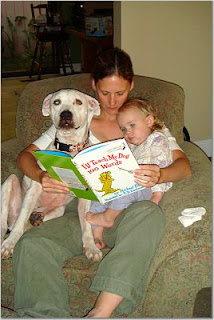 I look forward to a day when medical research shows the health benefits of pit bull cuddling and pediatric providers start prescribing the practice for sick kids everywhere....

The holiday season really brings out the optomist in me. Wishing you, and pit bulls everywhere, health, happiness and peace in the new year.
Posted by Bambi at 12:01 PM

Cute pics! I love this entry. Not necessarily that Piper prefers your dog over you, but that this is another example of how wonderfully pits do with kids. BTW, I love cudding with my dog when I don't feel good, too... although I definitely don't fit in her crate.

How cute is that!
But you don`t have to be an ill toddler to like curling up with a Pit in a crate.
I used to do it all the time.
Mac loved it.
All of me didn`t fit in but he still loved to snuggle like that.
No research or studies needed.
They`re what the Dr ordered or should be.

Recently, I got all the back episodes of Li'l Rascals via Netflix to watch at home. I was amazed that I'd forgotten the much-loved (and very put-upon) dog who starred in that show - was a pit bull/Staffordshire. Watching him get roughed up by those terrible kids is just a heartwarming testament to the sweet nature of these dogs - when well-treated, of course.

Funny, I often search my house for my husband, only to find him curled up with our pit in her crate.

Bambi, that photo of the two of them in the crate brings happy tears to my eyes!

i'd have to agree that pits provide that comfort when you aren't feeling tip top. they got a magic presence that makes all the worry and bad feelings go away.