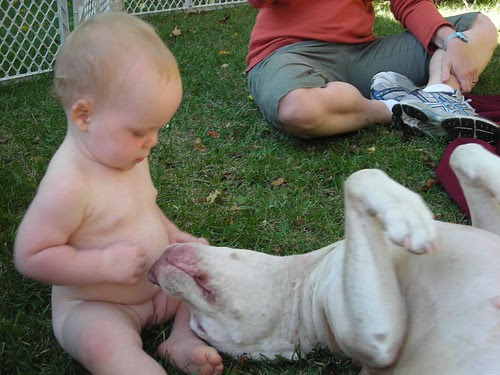 Some time ago, we brought you the story of Millie (seen here in her favorite position - upside-down soliciting belly rubs from people of all shapes and sizes).

I wasn't ready for a foster at the time, but as her luck would have it she's the Doublemint Twin of my personal dog, and since her temperament was also super-fab I had a sucker moment and took in the chewed-up, overbred, filthy, hand-shy street urchin.

Part of the reason for this sucker moment, of course, was her story - this was her fourth trip to the shelter, and her most recent home was an adoptive home of that same shelter. Unfortunately, that adoptive home had given her away to a friend as a guard dog, and in that situation there were fights with the other yard dog - also a female pit bull. 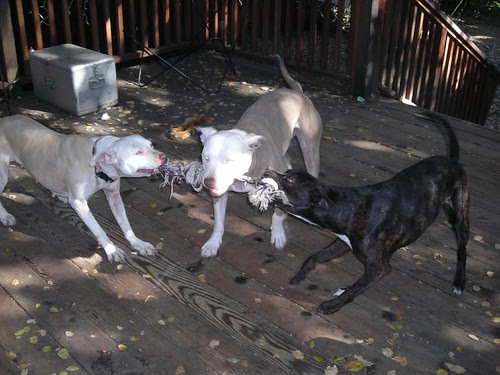 In addition to having fresh wounds all over her neck and head, Millie had some old scarring - but her mellow nature and intense desire to please her people made her more than willing to settle in and play nicely with the resident dogs.

My own Bitchy Queen female quickly established her world domination, and Millie was only too happy to join the pack as one of her loyal subjects. Once that was settled, the two became pals - something that most wouldn't expect between two mature females, one of whom had a history of yard fights with another female pit bull - but something that can happen if the chemistry is right between the dogs and good direction is set by the people. 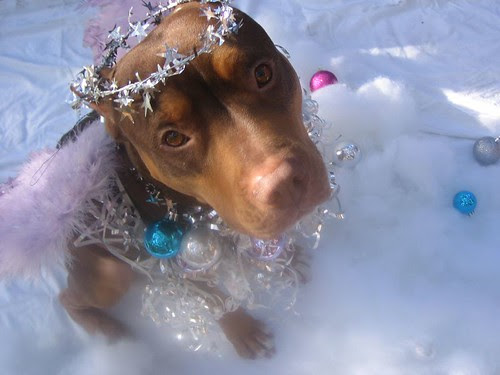 Millie had many fans within the group, and we really hoped that someone "in the family" would adopt her and help her achieve her true calling as a Therapy Dog.

In addition to the resident foster dog pack she found a special friend in Bad Rap alum Booker and his human mom. (Who can blame her, really? Booker looks so nice in seasonal metallic bling...) Unfortunately, Booker's Mom wasn't ready for a second dog - much to Booker's dismay.

We decided that Millie should be placed with a second dog - she really comes out of her shell when another dog's around - and so, despite some good applications from single-dog people, we hadn't yet found the right people for this special gal.

Then, we got an app from a young couple with a family home and two resident dogs - a large male Rottweiler and a young scrappy Rat Terrier/Chi mix female. We figured that Millie might find the Rott's similarity to Booker reassuring, and knew that any Rat Terrier/Chi mix would provide her with the Reigning Canine Bitchy Queen rule she'd come to expect.

Just to make sure that everything worked out, we put her in a foster-to-adopt contract and - despite her already having a CGC - made her new folks come to Pit Ed classes.

Millie is still in her foster period, and we're pleased to report that she's doing great! As expected, she's most often found playing with Cesar, her Rottie heartthrob, or hanging out in obeyance of mighty mix Cleo.

This street urchin has come a long way since she landed at the shelter, chewed up and filthy and there for the fourth time, all of which meant she was unadoptable. We're looking forward to moving her story (and the above photo) to our Happy Endings soon - fingers crossed that this last mile in her long tale to forever home is the shortest!

Man,you people have some love bugs
and some great stories.

Congratulations, Leslie. You done good. And I bet you miss her!

Great story!! Here's to many more great years for Millie and her new family/friends.