"She was, quite simply, the best." Pit bulls that inspire 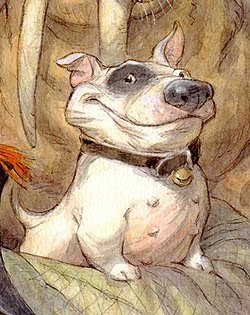 This was a painful loss for De Séve and is family. He describes how he found Darla running scared on the streets, and the influence she's had on his art in his most recent blog post. We're not at all surprised that, as of this writing, he hasn't wanted to post again since adding this tribute last month. Understood, understood. 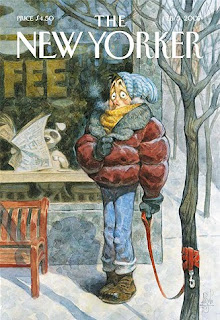 ...From the moment we spotted her twelve years ago on a cold and rainy night in Brooklyn, clicking down the middle of Court Street, she had us. Or perhaps I should say she had me....

I used Darla in as many pictures as I could, whenever a canine was needed (often even when one was not).
She was the sweetest, gentlest, funniest dog I ever knew and an important member of our family... 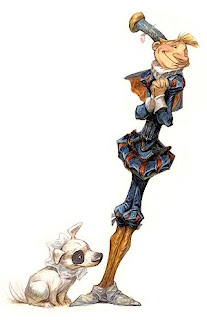 We've been longtime fans of De Séve's work. Tim was saddened when he found out that the dogs in Peter's work were actually his own pit bull. He was a staple in T's history lectures back when he was teaching History of American Illustration classes at the Academy of Art University in SF. He is adored for his stream-of-consciousness line sketches and warm, humorous, caricatures that make us fall in love with every person and animal he invents.

We're so sorry to see that his little muse has passed on, but heartened to know how much she delighted and inspired. That little piebald face of hers infected the readers of New Yorker and beyond. There's a true pit bull for you .... always finding a way to surprise us, charm us and then leave us wanting more.

Randall, Paulina, Fia and I are are all heartbroken, but we know how lucky we were to have her in our lives. She was, quite simply, the best.

Indeed, she was. Godspeed little Darla, and thank you Peter for sharing her with all of us through your wonderful art. (h/t Isaac Orloff for the news) 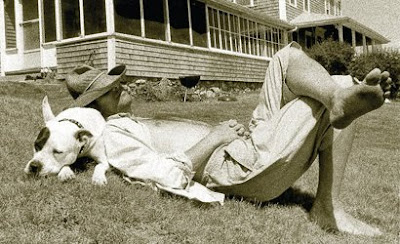 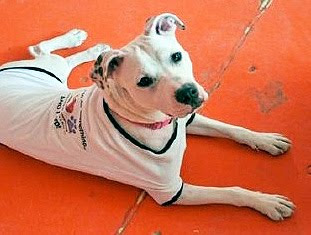 Annabelle: Inspired a cafe for dogs

Another darling that inspired her person towards creative life changes is Annabelle. She was a Hurricane Katrina survivor and a not-so-wanted guest in a New Mexico shelter after the storms. She barely made it out alive when a diehard rescuer caught wind of her plight and drove her back to safety in SF. Annabelle's big spirit and hurricane style personality came crashing into the life and times of Maureen (Mo) Murray and made a permanent impression. They were meant to be together.

Sadly, this diva passed on a short time ago of brain cancer and left Mo broken hearted and devastated. In her own words...

We miss her so bad you don't even know. There is a hole in our hearts as big as the sky and the only way we know how to survive without her, is to keep her spirit close with us. That's why we're opening AnnaBee's. She woulda loved having a place to hang out in Pacifica, in addition to the awesome beaches! 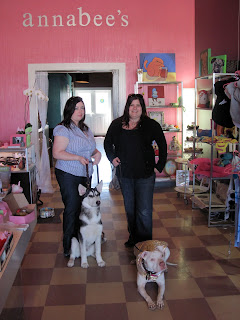 Mo recycled her enormous grief into a project that allows lucky dogs to be royalty for a day:

Okay, I'm hungry now - what about me? Lined up next door is a row of surf shops and carry-out restaurants, and Mo encourages the humans to grab a bite and bring it into the cafe where dog and people can eat family style and have themselves a day. 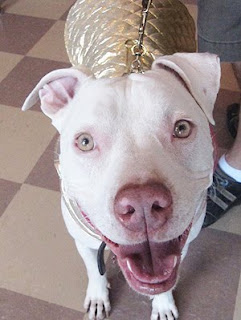 We had to see this brainchild for ourselves, so spent part of our Sunday soaking up the surf and sun and groovie vibe of Pacifica (AnnaBee's is right next to the beach). Besides dog dinners and cool art, they carry a bevy of spoiled dog wares like fancy collars and jackets. Sweet. Honky Tonky scored himself a pink trimmed gold lame vest number - Ooo la la - and we expect he'll be rocking it out in the Pride Parade in June.

Any and all pit bull dogs get a 10% discount at AnnaBee's - so go check it out and soak up the sincere love this lady demonstrates for the dogs. Above, Mary Ellen and Maureen voguing with Elliot and Honky Tonk

The best part of our visit was seeing what Mo has been able to accomplish with the driving force of her dog's memory fueling her on. Annabelle lives on (in bright pink with frills, no less) and every dog that gets to be very spoiled and very special for a day can thank her for that.

Whenever I read about the death of a dog now, tears spring to my eyes and my heart bleeds a little more. Having just lost our boy, Hurricane in January, I am still in that grieving state.

Our girl Macy has cancer, and arthritis and breathes a lot harder these days. I am dreading that dreadful day as it draws oh so much closer. I feel that Macy saved my life. After moving here 12 years ago from the UK I knew no-one. My husband would go off to work and I would stay home, or wander the parks and beaches. I wasn't able to work at the time because of the visa we were on and the only people I met were students or seniors. I was a 29 year old, lonely woman who needed purpose. I felt so homesick for friends and family that by the end of that first year I was almost on the verge of depression.

A friend of my husband was looking for a dog and on one of the rescue sites they saw Macy a 10 month old pit bull with a shy look to her. My husband fell in love and we pleaded with our then landlord to have a dog. He agreed! I remember going to pick her up and she immediately came running out of the cage, bowled me over with licks to the face (so much for shy).

Macy gave me purpose, she got me out of the house, she got me to go running, she made me lose weight, but most of all she became the friend that I so badly needed. Macy is an ambassador for the breed, turning so many people towards the breed instead of away from the breed. In fact it was because of her our good friends adopted Graffeo, a bad rap alumni. A story about Macy was published in the local paper after I had written to them about how disgusted I was that racism was still abound in our sleepy little beach town. After a man accused me of being "crazy to own one of those dogs". He didn't know me or Macy, he didn't know that she was a canine good citizen or regularly took part in agility, he looked at her and made a judgement, a poor judgement. It was because of this incident I pledged I would do as much as I could to bring the real story of pitties to as many people as I could.

I feel Peter De Séve and Maureen Murray's pain. I feel it deeply, it wrenches at me. I feel Hurricane around me, I wait for the padding of his feet to follow me around the house, I miss the sound of his excited bark when he heard us open the garage door. I miss him so much but like the others in this post, I am happy that he was part of my life and that we were able to rescue him from an overcrowded shelter where after 3 months he was sitting on death row. He had 9 happy years with a family that loved him very much.

It's always heart-wrenching to hear the passing of a beloved dog, no matter the breed. But when it is a pit bull, who has inspired such humor and grace, well, you can't help but want to hug your own pooch tight and hope that he's drunk from the water bowl of immortality (of course the cat would have too).

Such emotion is a mixed bag, it reminds us that our hearts are still beating and that we have much to do to help find that next muse. But it also brings tears to our eyes at work and makes the people around us wonder what is going on.

But as all dog owners know, our loving dog's mortal coil might be shed, but their indomitable spirits never leave the families they love.

Donna, thank you for sharing these stories.

Thank you for the stories. What the heck are you feeding that dog? Elliot is growing by leaps and bounds! The League had its big gala benefit Saturday night and Georgetown Cupcake made special cupcakes for the dogs. Several of the dogs made it clear they preferred the made-for-humans cupcakes. LOL.

You're a gifted writer, 2 brits. Thank you for walking us through your heart with this wonderful post.

"The more we love, the more it hurts" -- terribly true. If I learned anything from my beloved Simon (who taught me a million lessons, btw), it's that we can survive the unthinkable separation that comes with death. Not only survive, but fall madly in love again.

Best wishes to you and your Macy. May she continue to make you strong now and after she's slipped back home.

Dianne - We think Elliot is planning to be a gentle giant. He's huge, and his adult canines have only just started poking thru those pink puppy gums. Dog help me! I'm crazy in love with that dog, and he's being such a good friend to the pit bulls around here. He's on a raw diet, btw - and at this point, the fake doggy cupcakes get gobbled just as fast as the made-for-me cakes. But i don't like to share. ;-)