a good guy brindle from a far away land

We woke up with a strange dog in our house the other morning. That happens a lot around here, but this one confused me for a quick minute. "Whoa. Who is this and how did he get here?' 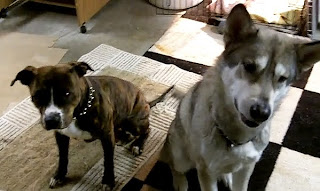 Cobwebs cleared, it all came back. Chopper is his name and he just flew in from Indianapolis. It's a crazy story, but - ahem - while Tim and I were hurting from the loss of our husky Simon and scouring rescue websites in search of a new family member, we came across the story of a very handsome sled dog who was saved thanks to the good deeds of a Good Samaritan and a male brindle pit bull. A pit bull who helped save a husky? A husky who likes intact pit bulls? Our ears perked. It seems that the dogs became fast friends while skittering around in an Indy neighborhood together, trying to stay alive in the mid-winter freeze. Good Samaritan Renee has a history of helping wayward dogs and saw fit to lure them in to safety. Problem was, the Husky was the shy type and too afraid to approach her, but after some convincing on the pit bull's part, he finally followed his lead in and found himself in a warm garage with square meals and new human friend. Mutt and Jeff. Or, Chopper and Adai. Two peas in a pod, safe at last. 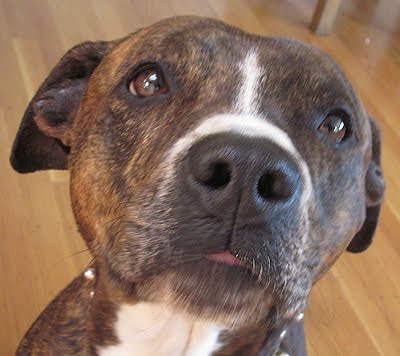 Renee located a husky rescue to help with the furry one, but the pit bull was big time out of luck. Indy pit bull rescuers were stretched to the max with the task of helping dozens of dogs from a huge bust, so pickins were super slim and the Good Sam was on a tight time table to find them new digs. And so, in march the suckers. After watching the dogs' videos again and again and melting over the story, Tim and I made plans to bring both to CA -- the husky, to adopt as our one and only, and the pit bull to place. Oh wondrous happy happy joy joy.

Chapter Two: It turns out the husky was destined to stay in the midwest. (Sad for us, but happy for him) And the pit bull? How could we say no? He's here now. Not quite what we were expecting to do when shopping dogs, but who are we to thumb our nose at such a special little guy after all he did to help a husky? 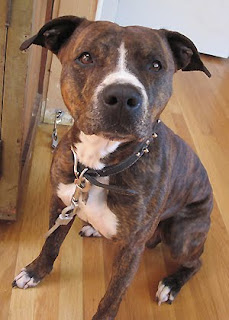 Now that he's landed, we see that Chopper is one of those "I need to please you" types, ... a bit of a Yes Man, actually. He's so far dog tolerant if not dog social (updates later) and he's big on licking his lips and dancing back and forth on his little white feet to show you how much he appreciates your friendship - and your treats. And, he's a senior. His unregistered microchip traces back to an adoption from Indianapolis Animal Control eight years ago. Somewhere between that adoption and this rescue, he learned some impressive obedience skills. Always a mystery, these dogs.

So! brindle lovers! ...We'll be holding him here at the house for some more get-to-know-you time, then we'll be searching out foster or foster-to-adopt options for him. Let me know if you have a heart for his type; we'd love to introduce you.

To be perfectly honest, I felt a mild panic when we woke up to him the other morning .. "Oh NO! another dog to find a home for - What have we done?" but thanks to a strong Peets coffee and a big slurp or three from Chopper, it all made sense. He was destined to come to CA, even if it meant hooking up with a wayward husky who won our hearts online in order to get us to notice him. Nice job, boys - and thank you Renee.
Posted by Donna at 6:11 PM

The senior yes men are my favorite. What a sweet boy.

You guys really know how to warm my heart! I can't wait to hear about all the great things this guy is doing - it always seems like you are destined to make a difference for both individual dogs and pit bulls/dogs as a whole! THANK YOU! Oh, and a belated congrats on the adorable new addition (that sleepy pic is too much!)! I know how those crazy snow dogs can work their way into your heart. ;)

Let us know if you need more coffee and good for you and Tim!!

Things DO happen for a reason! He's beautiful, isn't he... And he sure has a gorgeous, "love me" face!

Hmmm...in a funny way I think the Husky wound up saving Chopper right back. What better hands could a pittie be in then Bad Rap's? Cheers to all involved.

How could you not wake up happy to those sweet eyes. I wish we all spoke fluent dogese to get all their stories. I'll bet he has one to tell. Thanks for taking him in. You'll have to tell us how he and Elliott the legend get along. I'm sure Chopper has a couple of tricks to teach him.

You're so right NYCKitten ... it seems that the husky did save the pit bull. We can't argue with that kind of fate.

Elliot still has yet to meet him Leila, but we'll definitely post updates as Indy boy gets acquainted with our Idaho husky. :-) We're hoping for another solid friendship.

I just knew it! Thanks so much for taking this boy - he has plagued my thoughts since first reading about him! I agree - everything happens for a reason and thank you!!

There`s a little book in this story of 2 friends for someone who can write.I hope the Husky who stayed behind got a real good home.
This dog`s eyes are so soulful.How could you say no to him.

Where can we see the aforementioned heart-warming video?

hey teachinator, I'll have to ask Renee's permission to share. check back soon!

This is awesome - I love brindle dogs - he is so cute! Thank you for helping him!

That last pic makes him look like a total yes man and in the best way possible. :)

I wondered about this little guy when you posted his video with the husky. He seemed like such a happy little guy.

I'm so glad you brought him out to Cali! If all it takes is a little coffee....hmmm.... maybe a giganticus donation of coffee to softie Donna is in order???

He's so sweet. Thanks for making my Sunday ;)

I was wondering what happened to this lover boy - thanks for the update. Chopper is such a dreamy bully boy - senior, brindle, and sweet. If only there were fewer miles between CA and Maine! Funnily enough I just ordered a "Brindle is Beautiful" t-shirt in honor of my own brindle babe!

WONDERFUL story! Love these brindle and white sweethearts. I bet this middle-aged boy will help even more creatures with his new lease on life.

Chopper is stunning! He looks like he just stepped out of a Kate Hepburn movie. Bless you for helping him.

Aw, thanks for an upbeat story. We all need as many as we can get. With that in mind, I'm happy to report, actually over the moon as you put it, that our pittie who has been lost since April 20, 2009 has been returned. For the reward money. Go figure. You can read her story here

I may be available to foster (but not adopt) him. I have a female senior dog friendly pit at home, so it depends on whether he would be ok with her or not. I'm in Oakland, if that helps.

Hmmm... I wonder if he'd get along my my 9-year old brindle girl. Looking forward to more updates.

What an amazing story. The following is no joke. My boyfriend Tim and I also have a brindle colored pit bull named chopper and we live in indianapolis. Your chopper and our chopper could be twins they look so much alike. Pit bulls really are awesome and they bring a love to your life like no other dog.

Thanks for saving him. He reminds me of my old brindle and white adoptee I named Playboy. Never was there a better dog. Let me know if you can't find a home for him in Cali....I'm in NJ now and I'd take him in a heartbeat.

He looks sooo much like our dog Lucy, who we adopted from you back in 2002. I will have to figure out how to attach a picture of her- same white gloves and everything!

You guys continue to astonish me with the size of your hearts and scope of your help. Bless you all. If I lived in the US I would jump at the chance to adopt that little brindle man...

Thanks so much for all the support for this long distance rescue. It's great to see that he has some options already. Since he's still brand new here, we're going to spend some time staring at him and will map out his best options once he shows us who he is and what he thinks of this big bad world of ours.

What a sweet face! I would foster him at my home in Oakland if it would work with my own dog.

awww Chopper is so handsome! I'm so happy for him to be in your loving hands! I once had a brindle staffie named Chopper (Choppy)I now have a Staffie senior brindle boy named Zeke who looks very much like your Chopper!

I love this story. Thanks for sharing it. Weird how fate works. Lucky boy.