Well, the media's buzzing again with news that the Supreme

Court issued its ruling in United States versus Stevens, the federal criminal case in which Stevens was convicted for selling videos depicting dogfighting and hogcatching. The Supreme Court ended up agreeing with the Third Circuit and striking down the federal statute as unconstitutional because it was overbroad.

In my first blog about this case, I said that the case really wasn't about dogfighting or dogfighting videos. I still think that. The crux of this whole case is whether our legislature wrote the law too sloppily. The Court basically said that a literal reading of the language of the statute could criminalize many other otherwise "innocent" behaviors and even though the Government said that it did not intend to prosecute those "innocent" behaviors, the Court said it would not "uphold an unconstitutional statute merely because the Government promised to use it responsibly."

I know many of you are up in arms and disappointed and angry. I get it. And I understand the horror that Justice Alito writes about in his dissent that crush videos are already selling again based on this statute being stricken. I read the Supreme Court's opinion only to say that the Court won't uphold a statute as constitutional based only on the Government's assurance that it won't apply the law as broadly as it's written. The Court very clearly stated (and appeared to hint) that it was not deciding whether a criminal statute that was indeed limited to crush videos and other depictions of extreme animal cruelty would be constitutional; today it only decided that this particular statute was not so limited. 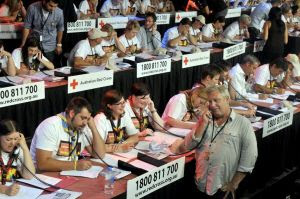 So many of our laws are horribly written. It's just that not many of them get in front of the Supreme court. This was a terribly written law that gave prosecutors much too much discretion.

So what now? I stand by my initial review of this case. It's our job is to get on the horn fast and tell our congresspeople that we want them to do their job and write a better, more narrowly tailored law criminalizing what they intended to intially: extreme animal cruelty, including dogfighting and crush videos.
Posted by Christine at 1:31 PM

I posted about this too. The thing is, their ruling not only opens the door for the horrors of the dogfighting and other torture videos but what about ANY illegal act? Murder and rape are illegal as well. Are videos of this legal too? Right now the only exception to this law is child pornography. I am so scared for the future of this country. This is one of the reasons I don't want to have kids. There is no reason to expose another person to this injustice.

ANY video that depicts an actual crime being committed, should be a crime in itself. And subject to seizure as evidence, and the videographer guilty of conspiracy or as an accomplice , that should be a reasonable way to formerly interpret the law without any inflamatory results. Hunting, although despised by some, is NOT illegal. Dog fighting and child abuse and animal cruelty ARE

I hate to agree with Alito, but google crush videos animals and see the thousands of hits that come up. I don't have a congress person so I am counting on the rest of you to speak up.

Excellent post and thank you for your analysis! Getting busy with that letter writing now!

@whowouldathunkit, the opinion said that hunting is illegal in DC, and the way the statute is written, it's possible for a video of hunting, taped in a jurisdiction that is legal, but sold in DC where hunting is illegal, makes that person selling the video subject to criminal penalties.

I hear what you guys are saying. I do. But the Supreme Court does not and cannot make our laws.

Which brings me back to my original point which is that we have to urge our legislators to draft a new statute. And this time, because it's gotten so much media attention, maybe they'll be more amenable to listening to public opinion.

I think people are losing the forest for the trees:

1) dogfighting is already criminal and is avidly prosecuted. "Crush" films are not because apparently no one has found any one to prosecute. 2) laws against depictions of cruelty will not prevent people from seeing acts of cruelty: such laws will always exempt "news" and "educational" operations. CNN and HSUS have made more money, created more anti-pit bull hysteria and put more people in contact with dogfighting than all the dogfighters in the world put together. 3) the unintended consequence of outlawing depictions of animal cruelty would mean, for example, that people trying to improve treatment of animals in slaughterhouses could be prosecuted for filming and disseminating the films showing the horrific cruelty these animals suffer. 4) limiting the law to those who are "profiting" is a joke of course, given the looseness of the laws regulating the establishment of "nonprofit" organizations. Not to mention: Does anyone here truly believe that Pacelle and Newkirk don't personally profit (through their generous benefits and perks) from the programs of their organizations? 5) no one chose (or could find) crush film producers to use in this case. They picked on Bob Stevens. We know why, and it has nothing to do with animal cruelty. Christine, you're dead right about that. 7) there are all kinds of entertainment that depict illegal acts, sometimes quite graphically and realistically. Do you want to try to find the line? 8) dogfighting is not the same as pornography. Sexualized children as models on mainstream TV and in magazines is a lot more like pornography but gee, who's going after that? 9) The SC has NOT, repeat NOT, ruled that it's now OK to torture animals

Thanks to both Christine and Emily S for clear thinking and clear writing. I have seen a good deal of hysteria in reactions from those working to protect animals, -I'm involved in a group working against horse slaughter), - and it is nice to have this sensible review of the facts of the case. Our legal system, like our political system, can be so slow that one wonders if anything will ever happen, but poorly written statutes are not the answer to that problem. Again, Christine (and Emily!), thank you so much. - Jean in Seaside

I too think that the way to go is to get bills which provide particular exceptions, such as that for child pornography. I urge everyone to contact their senators and representatives. This is an issue which, I would hope, would garner large support from all voters. It's also worth noting that bans can be placed on things which "promote" rather than "document" illegal activity. For example, the sale of dog fighting paraphenalia is illegal. To address issues of animal activists using footage, they are not "promoting" animal cruelty. Similarly, programs which document child abuse or pornography (To Catch a Predator springs to mind) is not subject to the law which prohibits the sale of items "promoting" child pornography. I assume the same distinction could be made for animal abuse/ animal fighting videos.

Thank you for explaining this correctly. You are absolutely right. The Supreme Court doesn't want dog fighting videos out there, but this statute was written so poorly that it could not be enacted.

Well, Kristin, I did write to PETA and ask them to remove me from their mailing list because I considered the material they sent me to be pornographic. I haven't heard a peep since then.

Being the mom of two rescued pit bulls, I won't even get started on PETA :). But, I do agree with you. Organizations that show grotesque images rarely get my money. I think those types of images often miss the mark of those who are interested in animal rescue. Though I know the bad things that go on, I prefer to look at happy animals.

Or, Dianne, did you mean the naked people in their ads? Either way, I agree with you - it's been a really long day :)!