Party in Philly for the April fools that care

We're clinking a long distance toast to the PAWS crew in Philly, who went out on the town tonight to celebrate their commitment to better days for their city's animals. We're so happy to see you guys enjoying yourselves via cyberspace and we thank you for doing what you do at the shelter! 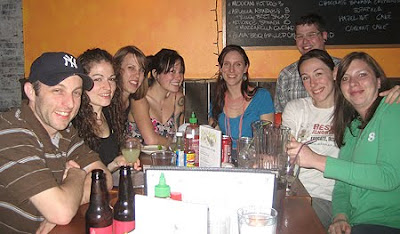 Hello - I am a volunteer at the Philadelphia Animal Welfare Society (PAWS). I'm totally biased, but I have to say that the entire staff and corps of volunteers work so hard day in and day out, so it was nice to be able to share a few drinks with some of these awesome people. The attached picture was taken at a favored watering hole that serves extra large pitchers of margaritas. Starting from left, it's, Rob, who is a volunteer, Sara, who started as a volunteer and will soon be joining the PAWS ranks as an employee, Jennie, who is a volunteer and foster, Sunshine, who is also a volunteer and foster, Allison H, who is the Assistant Manager of the PAWS Adoption Center, Jon, who is a volunteer, Allison L, who is the Manager of the Adoption Center, and Robin, who is the Foster Manager. I'd love for you to post this picture so that the PAWS crew, everyone that volunteers their time, anyone that donates much needed money or supplies, or anyone that has supported PAWS be given a moment of recognition for all that they do for the needy pitbulls, dogs, and cats in the city of Philadelphia.

Absolutely. Thanks for pulling everybody together, Rob!
Posted by Donna at 9:46 PM

Hooray for the PAWS crew. I'll drink to that! Hope you can hear my glass clinking from Minden, NV.

2 paws up Philadelphia.Thanks for all you do.

Thank you so much, volunteers & employees of PAWS. You are doing so much to accomplish a super-difficult task. Wishing you all the best of luck, and keep up the great work!
-Ellen

PAWS has been bustin their asses and I'm so proud of them and all they do. I march my new little pit bull around and tell everyone she came from PAWS!

I'm just so happy to have such an awesome, pit bull intelligent rescue organization here in Philly. Thanks for the shout-out BADRAP!