Full moon shelter madness ... A 50lb stray is found dragging a 45lb dumbbell on a 5lb chain by her collar. Ghetto weight pull anyone? ... Peek inside the night drop box: ALL pit bulls. 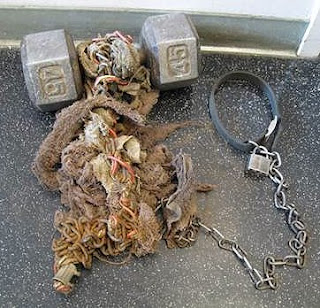 They blink in the day's light when we take them out. "Show me who you are, lil darlin" ... Time to evaluate. Megan counts and recounts the roster: 22 new pit bulls to suss and only 5 kennel runs open. That crushing feeling that tells us we won't sleep well tonite ... Female, blue. Drivey Dream - A blast to play with, but dammit - she sparks hard & heavy at the cute tan/white female. Yes, she's trainable. No, we've already got a coupla sparky blues. We sign off, heartsick. ... Cute tan/white, heavy with dragging teats, just shrugs in her face. You've made the cut, sweetie. We send silent thanks to her former owner who saw fit to socialize her. ... We find a box waiting for us. Yes! Barking dogs get bully sticks (thank you Bermuda Pam!), quieting the cacophany down to a happy hum ... 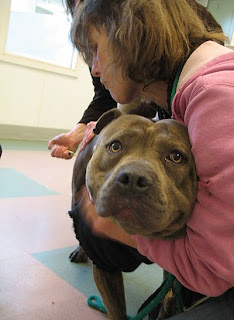 Oversized red cropped boy cries YIPE! when we pinch his toes. Big baby. Sad eyes beg for reassurance. He's clumsy, but connected. We give him a spot and pretend not to notice that there are still 13 dogs vying for 3 kennels. Think about it later ... The flow is interrupted by an owner surrender. An American Bully. He's falling like Bambi on ice on legs that don't work - both knees blown. His breeder saw fit to put a huge head and heavy bulk on shaky joints. He limps to the e-room where he'll meet his end. I'm so sorry, buddy ... Down the hall, a wide eyed black dog gives a low, almost inaudible growl. Her kennel will open as soon as her stray hold is up, but still not enough room ... Two more females that may be pregant. Yes? No? ... Frustration is derailed by a smiling visitor: It's time to sign Bob the Dog's final adoption papers. Congrats Bob - you made it! 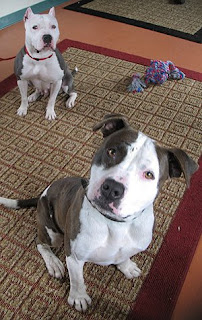 ... American Bulldog impresses. "Let's get a movie. Maybe rescue will take her." ... Tim holds a pregnant blue cropped girl during euthanasia, takes a phone call about Nelly's surgery. ... Staff is locking up, it's time to hustle. Lower the guillotine in the newly opened kennel so dogs don't have to sleep in the night drop box again ... Sal poops in his kennel as we're saying goodnight. Turn lights back on. Clean. ... Frida is grateful for her quick walk. Man, does she look good. I sing the praises of Grizzly Salmon Oil ... "Let's bring Howie home tonight; get him outta here."

He's scared of the car - we'll have to pick him up ... We talk about dinner on the way out, stare at the huge moon peeking over the hills. Howie smiling in the backseat.
"F-k you, Death. You didn't get this boy." A bottle of wine tonight for sure, some tug with Sally and Simon ... Answer a few emails, collapse into solid sleep ...

FOAS is a non-profit that raises funds for the medical needs of abused and injured animals that come into Oakland Animal Services. They'll be hosting their 2009 “FUN”-Raiser for Oakland’s Animals THIS Saturday, March 14, 2009 from 7 - 10 p.m. at Uptown Center - 401 26th Street - in downtown Oakland. Join them for live music by Juke Joint, drinks & desserts, a silent auction, and other fun activities for party-goers. Special appearances by some of the animals helped by FOAS. $25 suggested donation. 18 & over. Please give'em some love!
Posted by Donna at 8:48 PM

thanks for an honest perspective. pitty love and a hug from a fan in philly :)

Hi Donna,
Do you guys need help via a shelter transfer? I know we can take a few good tempered pitties, or any needy dog anyway. Were at Butte Humane in Chico

Guts and Heart. You got 'em.

Thanks for posting this touching snapshot of a shelter and what they deal with on a daily basis. Yey for Bob and his great new home! Thanks for all the hard work.

heartbreaking, yet you guys and all you do are heartwarming. bitter sweet. pittie hugs and love and wishes for better days ahead...

How I wish you guys were in New York...

I start every day with your blog. Today it made me so very sad, but then...an email. Lassie's Friends in Alabama, up near Nashville, is going to take two pits, seniors, one is deaf,who have been in the local shelter for over a year. Won't separate them, and with one being deaf and both being seniors they have lived on cold concrete and in the constant noise of a no kill shelter for well over a year. Bella and Yum Yum will have their own comfy dog home with air and heat and daily love to live out their last years. Could use some help with transport from Ft Myers to Athens, Alabama on Monday or Tuesday if anyone reading is from that area. If not, I'll get the donations for fuel and we will get them there. Husband being out of work and all, can't handle the cost myself, but sure willing to do find the homes if I can. I don't know how you do it, and I bless you every day and that offer of splitting the lottery with you if I ever win it stil stands. Thanks again for all you do and IT'S A GREAT DAY FOR BELLA AND YUM YUM. They can be seen on Petfinder, search Ft Myers, at Gulf Coast Humane Society. LOVE YOU GUYS!!

Thank you for this glimpse into the realities of life and death in a big city shelter, and especially for all the heart-hard work you do day in and day out.

Thank you. I want another dog but probably don't need one. I got impatient with the shelters and looked in the classifieds. Easy to get seduced by those perfect little bundles without the history. Thank you for reminding me why my 4 pitties are all rescues. And why breeding in this climate is unethical. Supporting the breeders is probably worse. Four are plenty. Thank you for all that you do and for the hope you give.

You have one of the most heartbreaking jobs. But you do it with the most open hearts. Thank you for showing all of those who cross your threshhold love and respect.

Respect and Love from Richmond, VA
Leila and her Quizz

Donna, Thanks for telling it like it is at countless shelters everywhere...same scene here in Philadelphia X 3 as the intake is about 30K plus and growing. Sad.

Have the bottle of wine...wish I could be at the fundraiser.

Oh dear, that picture of the American Bully just crushed my heart. I don't know what I see in his eyes, but damn it's so unfair. :(

Thank you. Please know you are not alone.

Admiring you for your courage to do what you do and ditto on the prior comments. Yes, the dogs really need a Bad Rap East, North, South and Central.

Thanks for sharing the happy and sad stuff. In addition to cheriching our dogs every moment, and doing everything possible to ensure they are stellar ambassadors, it is so important to remember those who don't make it. I hope Sally's toes are doing well. I actually navigated to your site years ago from an article about Tim's carving of her!

Exhausting just reading about it, let alone being there and making it work. A big thanks for all your do, it's SO IMPORTANT!

God Bless you for all that you do! I admit that I was "one of those" people who misunderstood the pitty breed until I literally had one dumped at our house last year. We fell in love with her and even though she was a strong willed dog, we started to make progress. I found your website when researching how to train Zoey and have been a faithful reader ever since. Zoey was killed by a car last June, and we only lasted a month before we rescued another one. I never thought I would love the breed, but they are so goofy and loving that you can't help it. Now I can't imagine life without my pitty Jesse.

Thank you for all that you do to educate people like I once was, and defending the dogs who have no other voice! I am now in the process of becoming foster home approved for the pitties in MN that need help!!

Please know that you have touched so many lives...THANK YOU!!

Oh. I am thankful you and Tim are the ones - there - with these guys. My heart and love are there with you. GHANDI and EMILY and HOMIE say us to. Tell her us too.

Thanks for all the comments and support on this full moon post. I know we aren't alone with these kinds of days. We salute all the shelter workers who live this kind of day every single week of the year.

I have to go and hug my pitties! Every time I go to the shelter I leave in tears (I am not kidding) for all the dogs that I can't take with me.

Sitting here with tears in my eyes. God bless you Donna, for your strength and your mercy.