This post isn't related to pit bulls in any direct way, but we just can't ignore the vigil that honored the four slain OPD officers and redefined our community in such important ways today. Our work has been drawing us deeper and deeper into East Oakland .. Like moths to a flame, maybe. 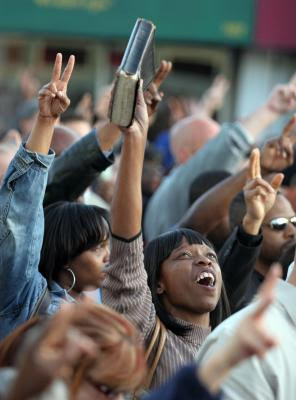 Our shelter is here, and so are 'our' dogs and their people and the pressures that affect them. Where else would we fit?

Just when things seem at their worst - foreclosures on every block, displaced families and abandoned pets, escalating shelter numbers, and the horror of shootings just up the road that rattled residents to the core - Despite all that, in the two hours it took to hold this vigil, we fell in love with our city all over again. Like, the "I get it" kind of love.

The city leaders called on the crowd to commit to making this town a better place, and everyone there seemed to stand a little taller and look around at each other the way you do when you want to remember the occasion. But this was what got me: A pastor asked us to raise our hands high and signal a victory for the four police officers who died. Why? because from here on out, their deaths will mark a collective decision to move forward with renewed hope. Victory, indeed.

Suddenly our group's little role in creating a better Oakland takes on a new tone that I hadn't considered before. We left the vigil feeling more at home in our adopted city then we ever did before the shootings. Thank you, Sgt. Mark Dunakin, Officer John Hege, Sgt. Dan Sakai and Sgt. Ervin Romans - and thank you Oakland.

PHOTOS: Vigil for OPD Officers
Posted by Donna at 10:28 PM

Well, it's so nice to get a peek behind the headlines and witness something life-affirming... Bad news seems to travel faster (and farther).

Words from your Sunday sermon ring through in the Vigil, worth repeating:

"Hope is never silent," making a bigger statement is more important than winning smaller battles, and counting yourself as a proud member of your community is the best way to demystify a perceived threat in our all-too-often paranoid society.

No 'bigger statement' then people coming together with passion. The tragic loss of the four officers bring tears of sorrow, while the thoughts of the community coming together feel like the sun rise to dry them up after a bleak night.

Even just a weekend in E. Commons area and one at the O. shelter, lefts its mark on me. What a better foundation then compassion in a shot fair. What better centering than a shelter for the needy.

And, what a better symbol of determination and constructive compassion for the community, a troop of well mannered BadRap pit bulls.

Donna - thanks for that wonderful update from someone who was there. I hope this does show Oakland a new way forward.

Bless those officers and the families they left behind.

Oakland, indeed is a very special place, and it is very fitting that East Oakland, the beating heart of the culture and spirit that gives the rest of Oakland its soul should be the site of unity and love for our fellow citizens. Out of the darkness of these four fallen officers must come the light of togetherness. It is a terrible price to pay for the precious gift of love, but if that is what comes out of this huge loss, we must take it and wrap it around our neighbor. And never forget.