Like any good pit bull centric activist, I can't look at the civil rights movement without drawing direct parallels between these historic struggles and those faced by the pit bull owners and BSL fighters of today. I really needed a little shot of SF-style activism last week and watching 'Milk' offered up the best boost in awhile. Harvey reminds everyone who struggles that "Hope is never silent," making a bigger statement is more important than winning smaller battles, and counting yourself as a proud member of your community is the best way to demystify a perceived threat in our all-too-often paranoid society. 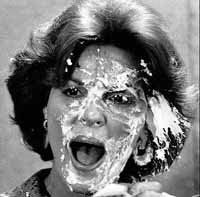 Harvey also had Anita Bryant, who was so very helpful in galvanizing the LGBT rights movement back in the 70's and in illustrating just how freaky-deeky fear mongers can be. God bless Anita for being such a hateful little bee-yotch. We love ya, hon.

"If gays are granted rights, next we'll have to give rights to prostitutes and to people who sleep with St. Bernards and to nail biters." -Anita Bryant

For our own inspiration, pit bull people have any number of vocal haters to bounce off of in this new century.  Like, Ohio's Punish-the-breed Tom Skeldon (Skeldon update from KC Dog Blog) and Denver's own Kill-em-All Kory Nelson. But my favorite hater is PeTA. Their stance against pit bull shelter adoptions works through my veins like a triple-shot latte on an empty stomach and it's helped fuel up some of our best efforts to make things better for the pit bulls in our corners. I still owe PeTA a personal thank you. 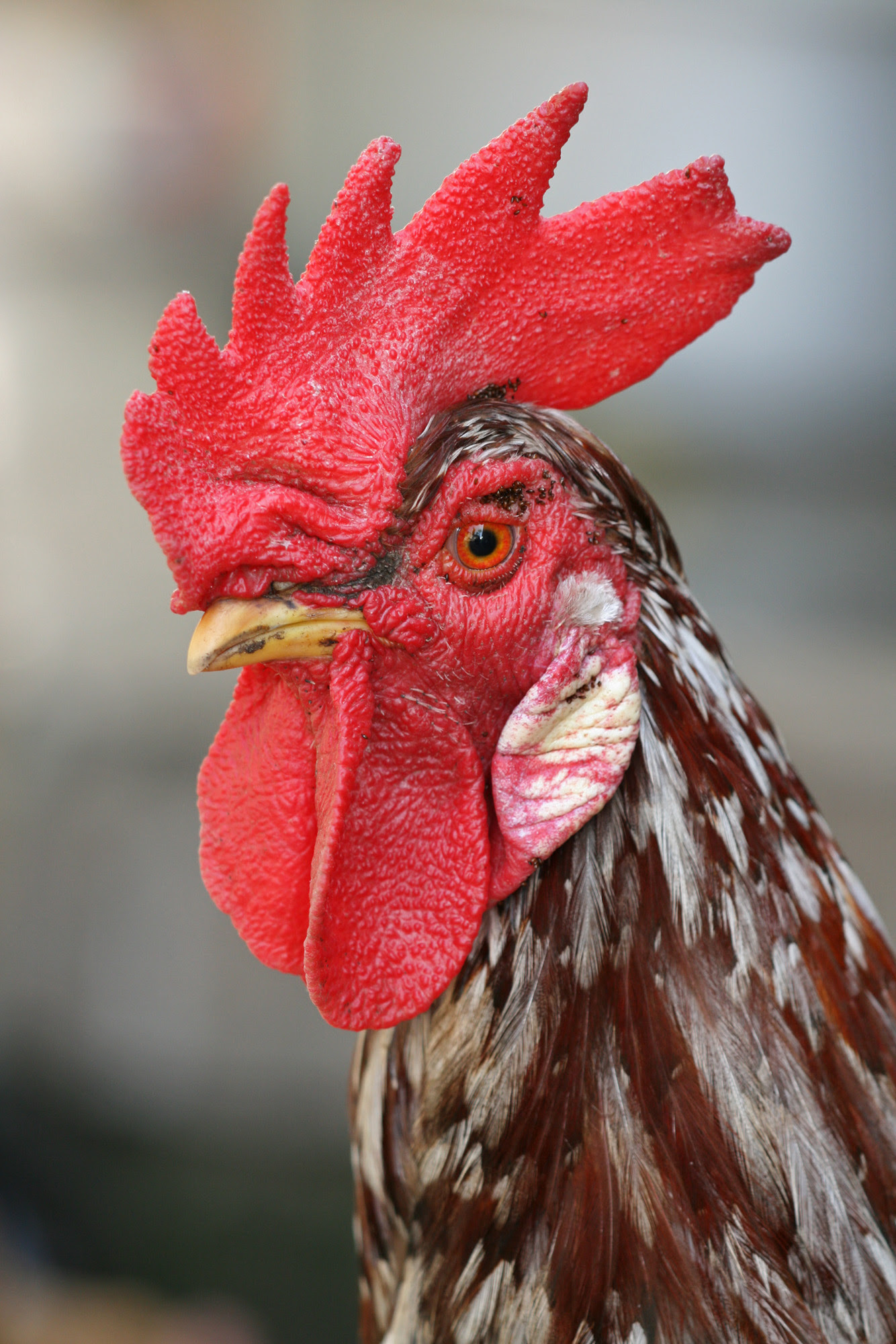 I set out to 'debate' PeTA's shelter policy with Ingrid Newkirk back in 2006 at the HSUS expo general session, but she begged out the very last minute and I was left to banter with a pre-recorded DVD, which was essentially a large talking head of Ingrid waxing on about chickens among other not-so relevant talking points. I was seriously confused by that fast hour+, and so were the 900-some people in the audience.

Tim and Leslie met up with her later during this infamous book signing in a scruffy Berkeley bookstore. Nice - but not quite the audience we were looking for.  Now! we can look forward to another opp to discuss our favorite topic with PeTA, this time in New Hampshire at an upcoming animal welfare conference. I'll be part of a panel discussion that looks at pb issues, including shelter adoptions and rescuing bust victims, and am fortunate to be joining Barbara Haysis, director of the Thomas J. O’Connor AC and Adoption Center and - Yay! - PETA spokesperson Daphna Nachminovitch.

"But it is important to bear in mind that nice families rarely come to a shelter seeking pit bulls. The vast majority of people who want pit bulls are attracted to the “macho” image of the breed as a living weapon and seek to play up this image by putting the animals in heavy chains; kicking, beating, and otherwise abusing them into aggression; and leaving them outside in all weather extremes in order to “toughen” them up." from PeTA's website

Another session will be devoted to - solutions! - on the topic of creating  'Successful Sheltering for Pit Bulls.'

I'll be outlining lessons learned from our work with various shelters including our new focus at open intake Oakland Animal Services. Marianne Gasbarrohas of the ever-progressive Animal Rescue League of Boston will take the reins next and discuss their methods for matching pit bulls to new homes.
The topic will unfold even further with a segment from the cool-as-a cucumber Berenice Clifford of Animal Farm Foundation, who will be detailing tips for kennel enrichment and keeping high energy dogs happy during their wait.
Good stuff. I sure hope some of our east coast rescue and shelter friends can join us for all or part..

Above: Pure thuggery. Chuy and gal pal Alex not only came to the Oakland Animal Shelter to adopt a pit bull (the ever macho red-caped Bob, to be exact), but ... They. Won't. Go. Away. Both have signed on to be volunteers and are frequently spotted walking dogs, educating the public, socializing rabbits and - gasp! - loving up on all kinds of shelter pit bulls as part of our Bully Crew Team. THUGS, I tellya!

Donna,
If there's anything we can do to support your panel discussion, please let us know. If you think that Peta will be defending their stance on pit bulls with more of their "thug" arguments and we can help disprove them somehow, happy to do it!
Allison and Frank
Leroix and Nola
Branford, CT

I love you guys! I wish I lived near you. I'd love to walk some dogs.

Whoaaaaaaaaa I'm famous, Donna you made me famous, I'm smiling knowing that I'm on the BadRap site.. woot woot.. shaking that tail... HEY! I'm so devoted to the animals because A. I LOVE them with all my heart and B. if it wasn't for having someone as wonderful as you and Mr. Tim to look up too.. I wouldn't be SO pumped up to work with these wonderful dogs! O ea, and I Wont. Go. Away :)

You know, I truly hope that you take PeTA DOWN HARD. Those people are so useless in helping the situation, but they DID, in fact, run a membership drive off the Michael Vick pitties, confusing people into thinking their monies would go to helping the dogs when in fact, PeTA watned the Vick dogs killed.

I seriously hope you shove their BS right down their own throats. Its time that someone did and I cant think of anyone better fit than you.

Thank you for all that you do,

I try really hard not to bring up the obvious parallels between the vilification of 'pit bulls' and other forms of bigotry, but it can be very hard sometimes. 'Pit bull' bigots even have a one-drop rule! And so many of the thug arguments end up meandering their way into full-on, old style racism if you wait a few minutes.

And at a fundamental level, so much of the hate is rooted in the same ignorance and xenophobia that bigotry almost always is. And, as always, the most effective tactic is to correct the ignorance and expose people to the thing they're so irrationally afraid of.

And nobody is doing as much to accomplish that as you guys are. Thank you.

I own a rescued pit bull mix and I am totally a thug- a 5'1", blonde female, fundraising researcher (assistant director) at the internationally known Johns Hopkins Institutions, community volunteer, big reader, and arts supporter. And when I look for my next dog I will absolutely come to a shelter and be looking for a pit bull.

My girl is more likely to lick somebody to death than anything else- the only injuries she's ever caused were nail scratches from jumping up to give kisses! Keep up your work, Bad Rap! You inspire all of us owners to keep educating and putting out our message.

Ohmygosh, Alex and I own the same sweater! And the same type of doggy. Someone needs to break it to Gap that they're selling thug gear. I bet Ingrid Newkirk is down to do it.

And yeah, I too hope you guys can render PeTA speechless at this conference. Please tell me it will on video...

Hey, this link will show you a picture of our dog Fiona with my husband and daughter. Charles has suffered from severe depression and anxiety his entire life. For about 8 years his mother had to do his shopping for him because he could not leave the house unless absolutely necessary, and when he did it would take time afterward to "recover" from it. Because of Fiona, a dog that he was originally scared of because of all the media hype, he is putting himself out in the world at every opportunity as a clown. The pic shows him in clown along with the Princess Fiona.
Please feel free to use it in your fight at any time.

Both our dogs were rescues and I am a teacher with a Masters degree, my husband is a global public relations manager and we have a 4 year old, a 2 year old and I babysit a 5 month old. I would quite happily provide pix of us with the dogs if you could use them.

Also not sure if you saw NCIS on CBS last week but there was a scene where the Director said to Gibbs that his kids wanted to adopt a pit bull from a shelter and Gibbs said they can be good dogs if you treat them right, pit bulls get a bad rap, they are affectionate, loyal and intelligent, and that he should give them a chance.

I was so happy to see a major show stand up for our breed.

Best of luck with PETA (though hopefully, with FACTS on your side, you won't need luck).

I'm proud of my pittie girl today. We were at the park over the weekend and two off leash small dogs kept running up to her, barking, growling, and showing teeth, and then running away. (Don't ask me what they were doing off leash in the first place.) After this happened three times she finally decided to try and play bow to them... they growled again and ran off. She looked at me and wagged her tail in a "What the heck was up with THEM?" way.

I hope everyone else in the park saw. I made a point of praising my "good little pit bull" in a rather loud voice...

Here in PA we just got one step closer to BSL. Irresponsible adult humans + pittie mommy protective of her newborns + curious child = an injured child, a dog who will likely be PTS when her pups are no longer nursing and screaming headlines about "another pit bull attack". And the owner, who apparently has a history with Animal Control, can pay any fines with the money she gets from selling the pups, while more dogs languish in the shelter or are PTS for lack of space. K.

Keep up the great work, guys! It is so appreciated. By the way, I left you an award at my site. :o)

Donna, will be looking forward to meeting you and both of your discussions. It's going to be exciting to see the exchange onfold first hand. Will there be a question and answer period at the end?

I saw that NCIS episode. I had gritted my teeth when the conversation started and when Jethro put in his good word for pit bulls, even using BAD RAP, I stood up and cheered in my living room! I volunteer at a shelter that takes and places pit bulls. We are seeing them become more and more popular as folks get the word out that they are great dogs.