Fostering Part III: Sassy bitches are worth their weight in gold 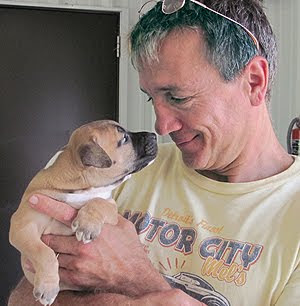 This is Part Three in our series on fostering, written in hopes that it helps more people say 'Yes.'

Under-socialized puppies are about to come flooding into rescue circles via the big Missouri centered fight bust, and rescuers are going to be faced with a special task: Making up for lost time. Workers on the ground at Humane Society Missouri - where 500+ dogs are being held including 100-some puppies - are reporting that the challenge of cleaning so many pens means little or no time left over for helping new puppies learn the good skills they need to help them grow into well-balanced adult dogs, and that can present an obvious problem.

We met 'the challenge' when we brought Elvessa home from the bust dog batch that landed in Oklahoma this summer. Elvessa had one other sibling when she was seized and a sweet but very stressed mama dog. At just seven weeks old, she was full of piss & vinegar and she was willing to assert her boss-dom on dogs five times her size - Yikes. Needless to say we worried about her future. 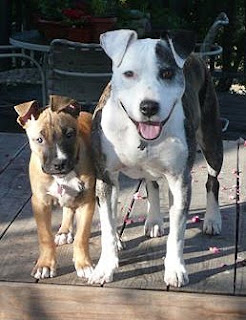 Time to call up a special foster home with a very special dog with a very special focus: She puts bold, pushy puppies in their place. Lily impressed us years ago when we watched her break up a squabble between two of her own puppies - And they listened. She's since helped us knock down the egos of some surprisingly scrappy little hellions and put them on the path to CGC-style manners. In a very real sense, she's helped to save a number of lives and create some wonderful Ambassadogs. What would we do without our Bitchy Queens?

If you rescue or run an adoption program at a shelter, brassy female dogs can be your best ally to whipping manner-less young pups into shape. Thanks to them, pups that may not otherwise look like good adoption candidates can make a turn-around. 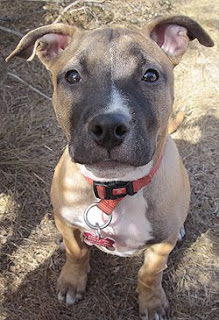 When we turned Elvessa over to Jane and Ron, we told them, "Don't get attached" ... Just in case that little pup was outside of the norm. They've heard it before. But after a five week check-in this past weekend, we heaved a sigh of relief: Elvessa was taking Lily's lessons to heart. That, and all the intense socializing Jane and Ron have given her with every kind of dog they could find. She greeted our dogs with calm interest and she offered an appropriate play style this weekend. A miracle - No more Cujo Puppy. Because she's drivey, she may not be an easy dog to own and she's not going to be a dog-park dog, but in the right home that relishes rules, she'll be a little Smarty Pants Super Star. 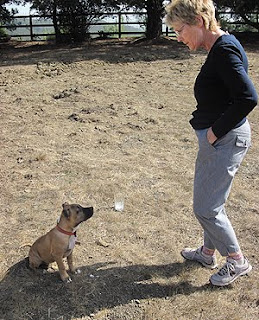 In addition to hooking under-socialized pups up with a surrogate no-holds-barred mama dog, Vessa's foster parents set up house rules from Day One. Nothing in Life is Free kind of rules, And they stood firm. Jane used to teach middle school and she told me, "What's a pit bull after dealing with a roomful of eighth graders?"

We don't have any blow by blow video of the first days of Vessa's Boot Camp, but we're pretty sure it was loud and that there were times when Jane and Ron wondered if they should intervene. We're glad they didn't! We're told Lily held Vessa down when she had temper tantrums and even dinged her faced with a mama-style correction, then rewarded her for good signals by giving her what every puppy wants: A happy playmate. Through a combo of tough-love lessons and positive reinforcement, Lily is teaching this under-socialized fight bust pup how to be a real dog. Thank you Lily!

How loud does it get? This here's a video of our Sally, teaching a young female - also from a fight bust - to cool out on the spazzy-slam play style. In a couple of days, once the pup shows due respect, Sally may initiate some play on her terms. Maybe. It's fascinating what we can learn from watching our pit bulls socialize other pit bulls --- and a classic reminder that, yes, they're still dogs.

UPDATE: Read how things work out for the now-grown-up Vessa.. LINK

(I can't watch this video without laughing at Sally. She's such a BEEYOTCH! - dog bless her.) 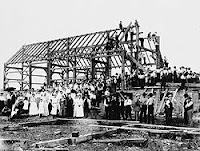 BARN NEWS After an email blast today asking for help with meeting a large matching funds gift, we're now just $1675 away from the big jump up the bar graph to the other side of 60K. WOOT! These kind dog lovers gave to help us meet the current 10K matching gift challenge offered up on September 1. THANK YOU!

Very good Sally...hair up on her backbone but still wagging. And the tease at the end...sitting down and saying 'okay, now, come on...try it again'. LOL!

It's also very important that people know how to use a break stick, just in case. Especially with same sex intros. I know you generally don't adopt out to same-sex and neither do I, but it is something to consider for the potential inexperienced fosters out there.

We see that interaction in all the dogs in our apartment complex. Whenever a new dog moves in they have to learn the rules. We have an open play area so the dogs interact on a daily basis. It is always interesting to watch a new dog join the pack.

Ah Sally, what a spectacular bitch you are. All hail the queen!

That puppy looks just like my female pit mix. so cute!

calm cool and collected, what a girl sally is.

I have no idea how I would foster without a canine helper. When my Assistant Boss Bitch (a malamute mix who tutored dozens of unruly pups) retired, she handed off her job to my pit mix boy and the job was renamed "Assistant Pack Leader." Both of them communicate ten times as much as I can in half the time. Assistant Pack Leaders are a gift from Dog! Great that you caught Sally on tape, showing how it's done.

Oh my goodness. That was the type of bitch my Indina was! How I miss her so! When I first rescued her my friend had rescued a Shiba Inu. It was the Shiba that put my little pit in her place, after that, Indiana was all about being the Queen and putting other mis-mannered dogs in their place!
I'm a bit worried about the future pit bull I'll rescue because all our family / friends dogs see me as half of the "Queen" still. I don't know who will be the one to lead by example when I adopt again! I don't know if my friend's Shiba will be up to it!! She's getting old and acts weird around me now that I'm without my better half.
Yes indeed, I love the bitches!! Sally is awesome!!

Vessa's mama, Minnow, is my foster. Minnow-butt has the same super drive personality as her daughter; sometimes I wish I had a Sally to help her with the basics! We'll get there though--Minnie grows in spunk and confidence every day. I feel so privileged, to have this diamond in the rough in the house.

My Daisy is similar in temperament (read: a total bitch to interlopers) but what she really excels at is teaching scaredy pups that being a dog is totally fun. I don't know how she does it, because she's not even particularly friendly with them, but within two days she can turn a cowering almost feral young pup into a playful and loving imp. She's also constantly breaking up fights at the park. She's the first dog I've had as an adult and I so wish that I had more experience so I could figure out how to harness her talents better to help other dogs.

Ms H. - We're SO glad to hear from the foster home of the wonderful Miss Minnow! If she's anything like her daughter, I can imagine she's a lot of work - but worth your TLC. Thank you for giving her a safe haven!

Dina - Knock on wood, we have yet to need a breaking stick in our many years of fostering all styles of dog personalities (we take things so slow with unknown adults, we practically bore ourselves to sleep), but we do keep sticks around and know how to use them. If I can think of a way to outline proper use of a stick without freaking everybody out and alerting the naysayers, I will.

Ingrid - I hear you! I can't imagine how we'd ever replace our Sally. When it's her turn to leave the planet, I have the idea we'll be looking far and wide for another seasoned queen bitch to take her place. Beyond the help they offer us rescuers, they're just so much FUN when they have a little extra sass. Sally loves her role as queen bee. She was a little too dog aggressive when we first got her, but now she has a way to channel her style appropriately. I love that she knows just how far to go without going overboard. Like Mary's dog Daisy -- it's amazing how helpful they can be to us and to the orphans.

I have a sassy girl at home that has helped put puppies in their place and teach them manners. She is the most confident, even tempered (but still with the right amount of sass) dog that I have ever owned. I always know just which little pit puppies are going to come home for some training. She's even helped with a few litters of chihuahua's (lol). We call it Sasha Boot Camp. When we have an unruly little puppy that thinks they are the boss, we send them to my house for boot camp.

My mix looked just like Elvessa when I brought her home. Since she "found" me I don't know her exact mix, but since reading your blog and others I am the biggest pit bull poseur of all. I can't wait for the 2010 calendar to brighten my work days.

My rescue dog Clover (pit/lab) acts exactly like Elvessa. The problem is Clover is between 3-4 years old now. (I rescued her as a super-hyper pup at about 10 mos). She gets along with some dogs that like to play rough like she does, but is there any chance that she might improve her manners at this age?