Sports heroes among us

It was a very different kind of Sunday in Oakland: In Defense of Animals gathered up a group of animal lovers at the coliseum for the Raiders game and pushed their message out to several news outlets 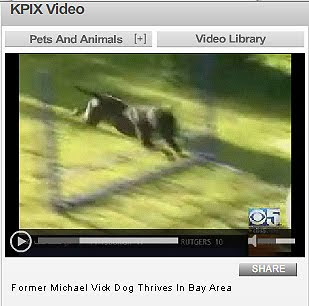 (well done, guys - news), our banner got off the ground AND the Raiders kicked some serious Philly butt. Woof!

Some people back in Philadelphia are starting to question the whole mess: 'Eagles make a bad decision signing Vick'

On their way into the Oakland-Alameda County Coliseum, the Eagles were forced to pass the now-obligatory bands of protesters, still upset that Vick is in the NFL despite his prominent role in a dog-fighting circuit. And on their way out, they were 13-9 losers to the Oakland Raiders, one of those NFL teams believed to be inept --- that after Vick was on the field for one play, a four-yard rushing loss. - Times Herald

The biggest highlight of the weekend tho' came from sports reporter Kimberly Coyle. She knows a real sports hero when she sees one. Check it out...

He's a PUNK, Karma literally bit him & his team in the arse yesterday!

I said it before & I'll say it again, I WAS a life long Eagles fan, UNTIL they signed him........Now I watch every time they get smacked down on the field!

He's living the high life, over on the main line in a bryn mawr condo.....making a Mill a year. He makes me SICK!

Getting off my high horse over Vick.....that is an AMAZING vid & props to the family & Audie for thriving and having a full life.

I'm glad Audie can move on, I don't think i'll ever be able to 4 give and 4 get what vick did!

do you have a picture of your banner flying high??? I would LOVE to see that. again, I am teary and so proud of you guys!!!

Awesome story on Audie. I love how the reporter pulls no punches and really lays out what Vick did. What a lucky and optimistic boy - so happy to see him thrive!

This is an awesome post! I would also love to see a picture of the banner if you have one. Love the anti Vick article, and the Audie video is amazing. I wish that I could get Osa to figure out the weave poles....maybe someday she will get it....

Thanks for everything that you do for those that can't speak for themselves!

I turned on the TV when I got into bed last night... and as perfect timing would have it -- or perhaps fortuitous timing is the better phrase -- there was Audie strutting her stuff! I was thrilled beyond belief!!

I just watched the video you posted and realized that I had seen a different one of Audie last night. This is the one I saw which was on a sports program.

thanks Maureen! -- I'll pass the link onto linda.