And another batch of bust dogs is freed

This is a bad luck / good luck story about yet another group of bust dogs who've been given the green light to live... 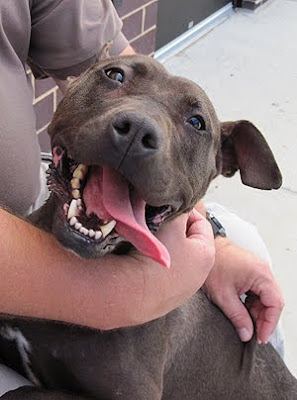 Good luck. This wonderful creature was removed from one of several midwestern dog fighters along with 34 other dogs in the summer's big seven state sweep.

Bad luck. She was taken to a location where the law defines pit bulls as vicious. Bad for pit bulls, bad for local shelters and rescue groups, who have such a hard time placing pit bulls that most don't even bother to try.

Good luck again for the dogs - Two federal agents each started proactively searching for someone qualified to evaluate the dogs and organize rescue efforts. (Did we ever tell you how much we're starting to like our federal government? who knew!)

Their search brought them to our door, and of course we agreed to get out to Iowa and do our part to help the dogs. Even better luck, Rachel Anderson and Lara Peterson of A Rotta Love Plus in Minnesota were willing to take time away from their busy schedules to assist in the evaluations and help us sort out the difficult task of matching dogs to foster homes.

Like deja vu. Four of us met in mid-September and loaded up on triple lattes in blazing heat so we could get to the task of sussing out dogs and hoping hard for their futures. This past Friday - on Tim's birthday no less - a federal judge for the United States District Court for the Southern District of Iowa reviewed the evaluation results and ruled - Yes - in favor of the dogs' rescue, and then released one dozen dogs into BR's custody. This is the week that we follow through on sad euthanasia decisions for the more troubled dogs while hammering out transport plans and begging up last minute foster options for the others. I really want to explain more about the feds who worked so hard to make sure the victims from this case got a real chance, but not every dog from this locale is able to be released yet, so I'll bite my tongue. But please put a bookmark in this chapter because the story needs to be told.

Maybe you're like us? We're starting to become strangely comfortable with news that yet another group of bust dogs who once had a snowball's chance of a future have zig-zagged their way to safety. And all via the efforts of a whole lotta good people who happen to believe in the same version of justice for the victims. It truly is a brand new day for our beloved breed.

Above. This pretty girl is about to be absorbed into the care of A Rotta Love Plus. We're all very envious of whoever ends up adopting her! 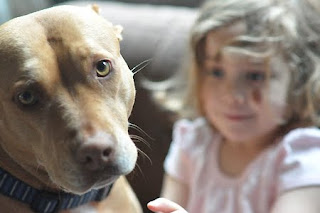 There are over 1100 unused votes at this eleventh hour of the My Dog is Family photo contest. Yowsa! We predict a wild and crazy Wednes/Thurs as people pour last minute votes in to their fav photos.

I've had to go back to this photo three times this weekend just for the smile. This is Doula, owned by Bridget Hodson of Fair Oaks, CA. Her story of Doula is as rich as her photo. Treat yourself and give it a look today.
Posted by Donna at 11:10 PM

Any way to track story of dog with beautiful smile and very long tongue?
Know you said is good news bad news situation. And you guys of course as always flipping candidates for sainthood.

GHANDI wants to know how many of his brothers and sisters will be able to stay in your barn while you and Tim find foster homes. He also wants to know if the dog in the picture with the child is a girl dog - because he is smitten. Again.

ooo thats really good news. What a great start to the day!

This news makes me happy for more reasons than I can articulate, but mostly because it seems that down-on-their-luck pit bulls getting the help they need is becoming less about luck and more a matter of course.

I was telling a neighbor (during a conversation of why we shouldn't give up on the many strays in our down-on-its-luck neighborhood) about my pit bull, how people believed in her, allowing her to bounce from the street to the shelter to a rescue spot to a family that had all the patience in the world for a, ahem, spirited girl like her. "You're dog got lucky," he said. "Things are changing," I said, playing it cool. And today I see that they are.

I was really pleased yesterday at the shelter when two adopters specifically asked me to show them a pit bull. The first wasn't a surprise, a young man who had had them before. But the woman who introduced me to her daughter (maybe 8 years old) and proudly said "she's been doing breed research, and she's decided she wants a pitbull" really topped it. I asked them if they knew about Bad Rap and they nodded in chorus. Good work!

"Yes, she is a Pit Bull. No, you can't have her." I am sitting here crying as this reminds me of the Frida "WQe're not giiving her back so there!" bit. I heart all of you people for your stance.

Wow, thank you so much for the lovely compliment (and Doula thanks you too!). It means a lot coming from you, Donna. You literally just made our week!!

Tim and Donna
It truly is a new day for our beloved breed because of the efforts you put forth and for that, THANK YOU!!!

how would we be able to foster here in texas?
thanks for the story after all the horror stories that we read in the media its so uplifting to know little by little things are turning for our pitties

SL - hell no, we're too surly for any title besides "pissed off and not gonna take it any more" but thanks for the lofty compliment. ;-)

the long-tongued girl aka divine creature is going to A Rotta Love Plus this weekend. lucky them, lucky her.

Dianne - really? that's so great to know. time's a changin,' yes they are.

MIKE - we heard from a little birdy about a very lucky bust dog - my favorite actually - going to your home. my heart sings. thank you!! we can't wait for updates.

kissa-bull. dig deep in your area for a rescue that has a good track record and do some work so they can get to know you and your style. PBRC.net might have some names to check out in their listings. did you see our first blog post on fostering? it outlines some things you'll want to look for when you shop your rescue.

or - if you're near Austin, check out their local shelters and see if they have any foster programs going. I wouldn't be surprised if someone did. best luck and thank you for wanting to commit! we need more of you.

Donna,
I guess I can adopt my foreverhome month as birth month to share with two of the favorite men in my life. Stay strong on both ends of the compassion.

On the calendar - we're to a day at a glance flip style >365 photos! We still think that people might have thought the votes went through when they entered their money (web design glitch). Ask all to "check back" that their votes registered(I need their votes).

My pac left a note on your blog with contacts to some of our network in 770## area.

As it starts in a lot of areas, we see hearts opening up to help individuals, with Vets and Kennels in the county stepping-up. Also, the dog training folks are very support of CGC testing and training for Bully Breeds.

HSPCA and BARC both are Pit Bull kill shelters, so lots of room to improve.

Great job again, Donna! Maybe I can write about your rescue of these latest dogs.
I wrote on my blog the other day that I think anyone who hosts fights or has rings and own property should be forced to allow the government to auction the property so the money can benefit the victims.
P.S. Post a button on your website for your FB page, would love to "friend" you!

Donna, yes, really! Chris said he was looking for a pitbull, and I asked had he seen Arlo? It was love at first sight. A reminds me a lot
of Audie, a real block head, all black, and a totally sweet dog. He could not believe he had walked past this dog twice.
He put in an app on him. The young girl had found O on our website and asked to
visit with her. Funny, she asked if she could pick the dog up -- the dog is almost as big as she is! I suggested she might want to
let the dog get to know her better. And a couple ended up falling in love with one of the "S" puppies who are brindle pitbulls and were
ready to take him home. So yes, Sunday was a very good pitbull day!

Boris : BARC will adopt out pitties, that's where I got mine. All though with their kill rate there odds still aren't good I've seen positive changes. Harris County still puts down all pits but they have started doing a special free obedience class for low income individuals who own pit bulls as well as free spaying and neutering so maybe they will have fewer to put down. The change isn't coming fast enough, but at least it appears to be moving in the right direction for once.

Kiss-a-bull: I don't know of any rescues that specialize in pits in Houson but CAPS is pit friendly, always has some and always needs foster homes. There's also Zeke's Fund and E-rescue, they are pit friendly and don't have any actual shelter so foster homes are always in high demand.

The fine folks at Bad Rap!!

Fast little birdie and yes we are very fortunate to have the opportunity to assist in rehabilitating a puppy (with age), an find him his forever home. We are going to document/video the whole process from start to successful forever home. By documenting and sharing the whole process, my hope is that it will motivate and encourage more people to FOSTER. Updates will definitive follow.
Again a big thank you for all the efforts by the folks at Bad RAP and A Rotta Love.

Thanks for the correction. I don't mean to add to BARC's bad press. BARC, under new management, hopefull will keep supporting and improving.

Fantastic tip on Harris County
http://www.hcphes.org/vph/Tricks.pdf
targetting teens with pits. What a great way to redirect energy, while helping both ends of the leash. I could get my big head around that program.

Hay Bad-Rap. I zig-zagged my way to safetee too! Thanks for helping my frends in Iowa.

Just wanted to let you know that my family and I are the people you referred to in the statement, "We're all very envious of whoever ends up adopting her!" :-)

We adopted her (Josie) from A Rotta Love Plus in February and have been loving every minute with her! We give BAD RAP and ARLP unending props for your heroic efforts in the multi-state bust and everything else. If anyone wants to follow Josie's story, her blog is http://pittiesinthecities.blogspot.com.

Thank you for everything you do!