out in Iowa and back at home in Oakland

There are always so many unspoken heroes behind the scenes of those larger criminal cases involving dog fighters. They stay in the background while making us look good by helping us get the dogs to safety. I was glad when Rita Mason (below) and Scott Wilson gave us the okay to tell people who they are. 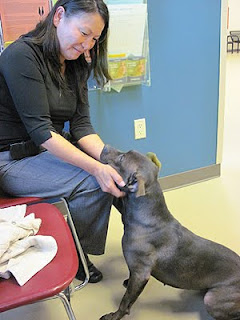 Rita is your federal government, ladies and gentleman: US Marshals Service, Southern District of Iowa. And not only did she search out help for the bust dogs that landed in her state, she rooted for each dog during their evaluations and even had her heart broken when a favorite male showed some troubled behavior. (Read: She wept) Scott Wilson, Operations Manager of Animal Rescue League of Iowa, is another helper who was rooting for the dogs. His shelter does not adopt out pit bulls, so it was extra special to have his and his staff's (Karen!) support. He smoothed our visit to the Des Moines shelter in a big way, stayed through almost every evaluation and hugged on every dog that ended up near his lap.

Thanks also to Maureen McGuire, Assistant U.S. Attorney, for bringing our recommendations to the judge and securing the dogs' release. And to Shane Bunn, Assistant Counsel to the Inspector General USDA, for contract help.

This group of dogs they've been focusing their energies on are so very important because they represent a teeny bit of hope to this state that's littered with a whole lotta bad news for pit bulls including breed restrictions and bans. So helping their bust dogs became a mission to help more than just the bust dogs: It meant demonstrating to Iowans that pit bulls matter, including the ones that most would cancel out without a second thought. We knew we had to get involved, but we didn't know how we would be received until we met these big hearts during our visit. What a pleasure.

A Positive from Iowa News - News Video
This past Sunday, four of the dogs left their kennels for good. This report documenting their departure gave me goosebumps. A Rotta Love Plus made the nine hour round trip to gather up the dogs they'd selected during evaluations and staffy bull devotee Kristi Johnson came to collect Ernie, a goofy little cannonball on four legs. Check out the quotes in the news piece - inspired. We're just so proud of all these good people.
(Note: We're currently working to get some lucky Iowa dogs to CA.) 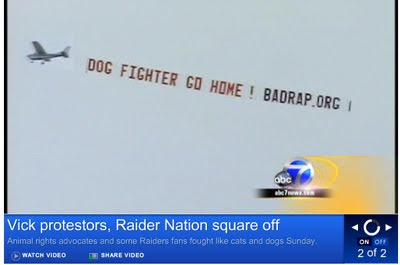 Here's a screen grab of the banner we flew over the Oakland Coliseum on Sunday. There's a story behind this thing: Turns out that the local FAA rep put so much pressure on the pilot to kill this message that the pilot caved and refused the job at the very last minute. We have to wonder if this rep was a big football fan. After all, as Christine Allen reminded us, chilling first amendment rights is a big no-no. We were in a pinch at that final hour but the pilot's partner is a dog lover and felt so bad about leaving us out in the cold that he contacted his competitor and asked if they would do it instead. It's interesting how many people seem to want to quiet the outrage against Vick's return. Even more interesting when a federal agency does the chilling.

BR adopter Dona Fong was at the game and reported back on the drama: "There was a lot of clapping and shouting for the positive when the Bad Rap plane flew over. I did go into the game because most of the protesters did not and I wanted to keep the protest alive once the game started. Whenever Vick came on to the playing field, which wasn't much cause he sucked, the crowd would boo, bark and many shouted dog killer. As I walked through the crowd with my Bad Rap t-shirt on ( "It's about the dogs, Justice for the Vick-tims"), many people gave me thumbs up, or shouted "I love my pit bull" and; several made comments like Vick is a Dick or Vick sucks. I had a few heated conversations with some idiots who tried really hard to defend him by saying it was a mistake. I said a mistake is adding 5 + 5 = 9. I said what Vick did was premeditated murder of innocent animals who's only crimes were they were too nice to fight - defend that. Anyway, it was a good day for Oakland and for our beloved dogs. I bet Vick won't forget his visit here anytime soon."
Thank you for your showing your cajones, Dona. We love knowing that our hometown didn't decide to pick its navel when the Eagles came to town.
Posted by Donna at 1:20 AM

Wow. What a great story about the people in Iowa. Love the US Marshals Service rooting for these guys. And - umm - well - l o v e Dona Fong's report. Yep. Whole lotta cojones.

Wow!! Was waiting to see how you guys did on Sunday, and this post brought a tear to my eye. So many people willing to stand up for the dogs that had no voice!! Wow!! I would have loved to see the staduim wide boos and geers, but I REFUSED to tune into that game! Dona, you ROCK!!!!! (All of you BR vounteers, fosters, etc... all of you rock!)

I left a message and you banner on my blog, have read.
Thanks for everything you are!!

Ah, Donna, you're making me weepy at work again. Whole lotta Cajones all around!

Thank you again and again for putting the dogs first. I am so proud of the work you do BADRAP!

I love how you owned the banner by including your website. I'd be curious to know if new traffic is more for or against. Either way, BAD RAP rocks!!!!!!

Thanks Lynn. Interestingly, our invitation to Vick to see his dogs brought in more negative mail (5 or so emails) than the banner.

I was surprised that anyone would think extending that offer was a negative for Vick. Most of the criticism was "Leave him alone" .. in other words, "Stop stirring the pot and let us watch football."

Tim is a diehard though and has been busy dialoguing with the critics. Most seemed to have the idea that Vick was a hands-off kind of dog fighter. ha.

whoda thunk it - thanks for the nice mention on your blog. I just saw it!

we so appreciate everyone's support. we're all in this together!

i am so proud of every one who showed up to support the pitties.

you know what its amazing that i still run into people as well who think vick had nothing more to do with the dog fighting than being the money behind it.. that is bad enough in my opinion. it seems i continually have to inform people though that he was way more hands on than that, and that he actually participated in the murder of at least six dogs.

it seems many who have opinions are very ill informed.

What kills me, really kills me, is his refusal to even call his Vick-tims 'dogs'....does everyone notice that he always refers to 'the animals'??? WTF??? He's lower than an animal, lower than a snake, even a centipede is better than Michael Vick.

As per usual, AMAZING work, BadRap and SF pibble peeps!! It is so inspiring to know that, as you looked dierctly into the eyes of the monster, you stood your ground and kept your dignity. That you can continue to keep your eye on the real issue...the dogs...and NOT on the horrifying nature of the beast (and his undoubted propensity to pick both his navel and nose!) is inspiring.

I keep hearing in my memory the cheer chanted at my high school football games many moons ago: "Hell..No...We Won't Go".

We are so glad and happy and thrilled that people are standing up for dogs and against peoples who abuse them!

When I read the story about the FAA trying to prevent it (anger) and the pilot's dog-loving partner stepping in to do it(relief), and finally saw the image of the powerful words floating across the sky (goose-bumps), viewed by thousands of football fans, I felt so proud to be part of a community that stands up for pitties. I have never known such bountiful love, such boundless courage, such forgiving resilience from cruelty and ignorance as that which I experience with the pitties I work with in my local shelter. Of course, you are the ones who came up with this fantastic plan (the plane). My admiration for y'all just grows and grows . . .

I heart BadRap and the people who put the effort in to make a difference. Here's to seeing it all through!