So about a week ago, I started reading media sources and a variety of dog-related forums about how the Supreme Court was going to hear a case about whether creating and selling dogfighting videos was illegal. Well, I finally read the transcripts of oral argument yesterday, and as it turns out, the case isn't really that simple.

As background, Stevens, the guy who was convicted was found guilty because he was selling videos that depicted dogfighting and hogcatching. He was charged with violating a federal statute that made it illegal to sell depictions of illegal animal cruelty across state lines. The statute doesn’t apply to videos that have some redeeming value, for example, for historical or educational purposes. 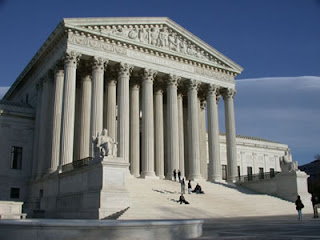 The only issue that's before the Supreme Court was whether that statute violates the First Amendment. The main concerns the Court had were whether the statute is overbroad and whether Congress overstepped its bounds in potentially criminalizing behavior that isn’t criminal.

The Justices peppered hypotheticals at the lawyers to figure out what Congressional limits were on regulating speech: whether Congress could ban a Human Sacrifice Channel where we could buy pay per view to watch sacrifices taking place in some imaginary land where sacrifices were legal. (By the way, everyone seemed to agree that Congress probably couldn’t ban it.) The Court wondered whether the law would criminalize the sale of videos showing off-season hunting or fishing. Or bullfighting videos that were filmed in Spain, where bullfighting is legal. And our newest Justice asked wondered about the possibility of whether the documentary, Off the Chain, would be included under this statute as it’s written because it contained gruesome footage of dogfighting.

I've never been great at predicting which way the Supreme Court is going to come down on cases before it, but I do know that both parties (and the Justices) agreed that dogfighting and animal cruelty is reprehensible. And illegal. Even if the Court decides to throw out the entire statute as unconstitutional, it doesn't mean that it is giving the sale of dogfighting videos a green light. One of the points made at argument was that if legislators intended to make the sale of dogfighting videos illegal because it promotes and encourages animal cruelty and helps cops find dogfighters, they need to draft a more narrow law that doesn't encompass other potentially "innocent" behavior. The only issue the Court is considering is whether the statute is invalid as its currently written because it hinders speech.

No more. No less.

So what now? If the court throws out the statute, our job is to get on the horn fast and tell our congresspeople that we want them to go back to the drawing board and write a better law. - Christine Allen
Posted by Christine at 9:13 AM

The only part that concerns me if the court throws out the current law, Stevens will likely get off. Any new law that will be written up can't be retroactive, and the current law will be null and void.

How is it the courts always seem to be worried about the rights of the person breaking the law?

Did you hear that Vick is getting his own reality tv show on BET? Un- f#@cking-believeable!

How's that for justice? Two steps forward and 3 steps back!

Anon 9:50 -- I don't know if this will make you feel better or worse, but I'm pretty sure that Stevens had already served his prison time by the time the Third Circuit vacated his conviction. He was only sentenced to 37-months (which was more than I can say about Vick).

How in the HELL can animal snuff films be protected under free speech? What next, child pornogaphy? The fact that this is even at issue makes me want to vomit. Steven's films are NOT documentarie. They are sold to turn on and teach animal abusing sickos.

Thanks for spelling this out. Yesterday, I got panicky emails from people urging everyone to contact their Representatives. The fact is, there's nothing to be done on the issue now until the Supreme Court issues its opinion. If the Supreme Court strikes down the law, it won't be because they "like" snuff films or dogfights, etc. It will be because they think it wasn't written properly, and Congress will need to go back to the drawing board. Well said, Ms. Allen.

Thanks again Christine for giving this great analysis. Each time I tried to read the material, I got pulled away and this really helps. Will you continue to monitor the evolution of this issue?

WTF!!! First, Vick gets re-instated back into the NFL, then the Eagles sign him, then a reality TV show, and now NIKE re-signs him? OMG, how can this be happening?

nike has denied endorsing vick, yet they are giving him merchandise to wear as they do with many nfl players. they should take some money and donate it to a rescue rather than giving vick any thing. i think the BET is crap for giving vick more recognition and the naacp is too for standing up for him.

Lynn, yes, I'll keep a look-out for the opinion when it comes down, though I'm assuming it won't be until next year.