Hey folks, Team Pibble here, raising funds and love for BAD RAP's new Ambassadog Project! We're into week two of triathlon training—or is it three? Who knows. Big grins to Boris, Josie, Bug, Brigitte, Deja, and all the rest of the pups barking at the sidelines so far.

One of the unexpected bonuses of all this yammering we're doing about OAS is turning up pit bull junkies in our lives that we never knew about. Leslie M. is a gifted poet EK's known for years who, as it turns out, rescued her own young pup years back. Leslie wrote recently about Sally's tough start:

Sally is my doggie love. She and a littermate were tossed from a moving car as puppies one December day. They were likely the runts of the litter of one of the fighting dog breeders in nearby . The other pup died. Sally was nursed back to health by a local vet, but no one would adopt her. I took my cats in for a checkup months later and fell in love with her. How could I not? She was small, three of her four hips were displaced, she had wicked bow legs, and she was carrying a little stuffed animal! ... She's been the heart of my household for years. Sleeps between me and Bill, wears a darlin' pink collar. And she smells like Cheez Doodles.

Whew, good to get to the happy ending there. I’ve met a few Sallies, the kind of survivors whose stamina will push us not only to finish this damn race, but to continue to ask for your contributions. There are probably a few forgiving Sallies over at OAS right now and we aim to do right by ’em like Leslie did.

So if you haven’t been back to Team Pibble to support BAD RAP, we’ve added the stuff you asked for—new shirts and styles. Also: a new extra-dorky short video of our coach and hey, hey, a new playlist too (it could be your dog!).

So come visit our sandbox, wouldja? We're waiting for you. You can donate any amount you like. 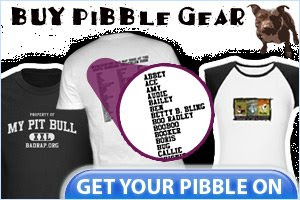 Posted by Elizabeth Kennedy at 9:21 AM

YES TO ALL - so more volunteers and $$$ - bullish on DIVERSITY.

As for the Trainin' Team - where following in spirit. Ankle weights on Sheena's OEL, wrist weights on my OEL, me in my loaded backpack (only when below 80 deg.), and Sheena (well she is almost 70 in dog years) setting
a alpha-B.. pace. Countdown to Aug 23! We are all pushing you to get in shape.

Keep you dedication and focus, we'll check back - Boris