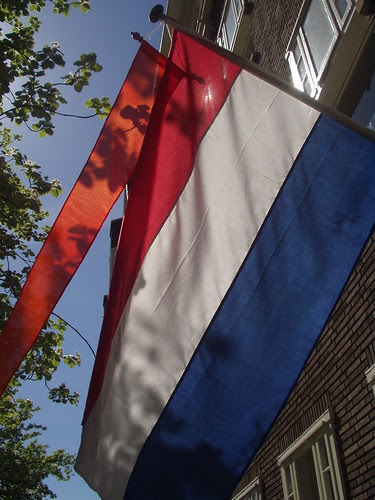 From the AP: Big News

The Dutch government says it will lift a long-standing ban on pit bulls because it did not lead to any decrease in bite incidents.

Agriculture Minister Gerda Verburg has informed parliament of the decision, which follows the advice of a commission of experts appointed to review the policy.

Instead, the country will focus on enforcing local leashing laws and owner education programs.

Spokesman Koen Geelink said Monday the ministry hopes to have a new policy in place by year-end, in which dogs that have displayed aggression will be tested by an expert.

The country banned the breeding and possession of pit bulls in 1993, after three children were killed by the dogs.

And how much do we love this? The sfgate is running a photo of Teddles (Vick dog) alongside this good news. Hubba hubba!
Posted by Donna at 12:49 PM

This is excellent. Although, maybe my math is off on a Monday, but shouldn't their headline read "15 year ban"? Or maybe the ban started in 1983. Either way, excelent news...

You're right Brent -- the AP reported it as 25 years, but that can't be right. Leave it to the media to confuse the good news as well as the bad - lol!

I've always thought the Dutch had a lot of common sense. Good for them!

Sigh. Someday -- someday -- I'll scoop the world with a news item. Obviously that day is not going to be today.

My next vacation will totally be in Amsterdam.

Good for them for actually admitting their mistake and changing policy based on actual facts. Hopefully other places will see this and learn from it.

Randomness! I was just thinking the other day about how much I heart the Dutch for some of their blogging citizens' responsible approach to--of all things--cockatoo ownership. Besides pit bulls, cockatoos are some of the most abused, misunderstood pets on the planet (see mytoos.com). I hope some American cities/states will learn from the Netherland's experience.

It's about time that a goverment admit to there mistake, i hope the all the other counrtys will see it like that. I lived in europe 21years and everybody had the American Pit Bull Terrier, there are great animal.
Dank u well, Thanks, Danke

I have a pitbull and he's the smartest, gentlest dog I've owned.