It's so nice to hear how many people are opting to run late for work on Friday so they can catch the Rachael Ray Show. It's like the Pit Bull Oscars, but without Jon Stewart. (darn)

This is the NYC limo driver who drove our K9 Celeb around town. He fell hard for the little monster and I'm pleased to report that Jonny held back and didn't vomit in the car once (altho' he looks a little green here, doesn't he?) <----

Rachael and her crew certainly treat their guests right: We enjoyed a lovely hotel next to Carnegie Hall that allows pets. Nice. The staff fawned over him so much that we knew they'd understand when he made a little do-do in the room (Oops). Video of a little room party, bulldog style: Five Star Bed Bug

I have to say, I had fleeting moments of guilt during this trip. So much expense and extravagance -- for a dog? Isn't this a little out of balance when we consider the human suffering in the world? Thankfully our resident poet and Pit Bull Hall diehard Elizabeth helped pull it all into perspective. She said "Hilton hell yes. There's a poet Jack Gilbert who has a great take ("A Brief for the Defense") on living it up despite the misery out there:"

If we deny our happiness, resist our satisfaction,
we lessen the importance of their deprivation.
We must risk delight. We can do without pleasure,
but not delight. Not enjoyment. We must have
the stubbornness to accept our gladness in the ruthless
furnace of this world.

Point taken. Thank you Jack and thank you, Elizabeth. 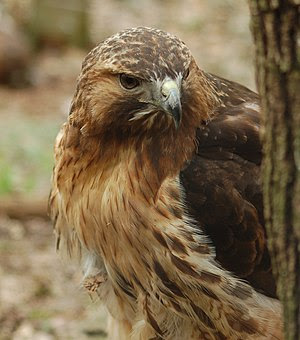 In an unrelated reality check on the Way of the World, we came home and were greeted by a pair of red tail hawks who've returned to the grounds of the East Bay SPCA (where Pit Bull Hall is housed) to tend a nest for the third year in a row. They're a marvelous pair and have fledged out several youngins.' What could be better than working a pit bull while watching a family of hawks spin overhead and scream out that life-affirming "I'm alive and I'm hungry!" cry? Whether it's New York City or the flats of Oakland, life is always better when it can be shared with the critters.
Posted by Donna at 9:35 PM

What a little charmer.
I wish Jonny could talk for just 5 minutes.
It certainly looks like he`s forgiven humans.
No need to feel guilty,he`s meant to show the world the truth.
Watching him makes my heart feel happy and less discouraged.
I`m looking forward to seeing his appearance on RR.

Johnny is SO CUTE! Look at him partying and living it up in the big city. He is just my type of dog. I'm so happy for him.

I love red tailed hawks, they're such beautiful birds! They're very common in this area too (all the way out on the east coast.)

Jonny is a charmer....
and he certainly deserves some extra treats and loves after where he has come from...

Its hard not to feel guilty, but being aware and helping others while still enjoying what you have are all VERY admirable traits!

I love the hawks! They are amazing creatures!

I say live it up. Happy people + happy critters make the world go round. :)

Jonny-- aka Mr. Elegant slash Silly Superstar! I can't WAIT to see you on the tele-tube tomorrow morning! *how exciting*

Too bad you missed the snow, I bet you would have had a great time playing in it!

p.s. LOVE the pic of you and your Limo driver. After what you've been through, you deserve a little luxury! And believe me, from the looks of it... it seems as if the driver would have worked for free. Pitbull love? Payment rendered!

Just finished watching the segment on the Rachael Ray show. Donna, you are one classy lady and you did a wonderful job. Rachael is awesome, too.

Donna, you and JJ did an amazing job on the Rachael Ray show! I don't know how you didn't cry as I had a stream of tears running down my face. I am truly happy!

Thank you so much! It was a wonderful experience. Surreal! - but wonderful. Here's hoping for a good ripple effect for the dogs from this show.