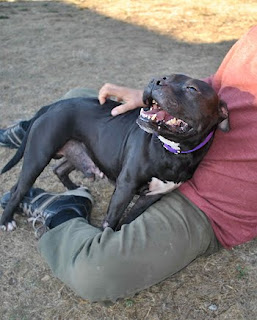 We welcomed two new guests to the rescue barn this past weekend. They're straight from a large cruelty case in Ohio that netted two hundred pit bulls. This case was special in that the survivors were moved to a local riding arena where HSUS staff and local volunteers worked long days for several weeks to keep the dogs going until they could be evaluated and moved to appropriate rescue.
You may see news blips pop up here and there as various orgs announce the dogs they took in - groups on the east coast especially. This rescue was particularly successful in the number of rescues and shelters that participated and the number of dogs that were saved as a result. A very happy success for the cruelty victims of Ohio.

Before "the boys" arrived, we combed a local Salvation Army for second hand leather chairs that can serve as cozy dog beds in the kennels. 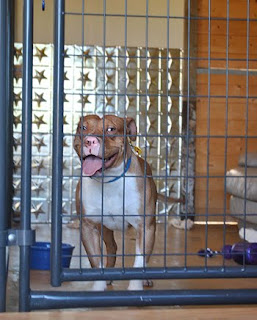 Twenty bucks a pop and our kennels are looking very homey and spiff.
You know how pit bulls love their creature comforts: when nothing much is going on, the boys are usually camped out in one of the chairs, snoring away. Ahhhhhh ... this is the life.

The newcomers are named Chunk and Rockin' Robin. Chunk - the black dog with the round head and Halloween pumpkin smile - is a middle aged stud muffin. Emphasis on stud. We think he's had a lifetime of making puppies based on his - ahem - behavior with the girls. A neuter will help square that away.
Chunk's got the Velcro-dog thing all worked out. When he's not in his chair, his favorite place is at your ankles. He does an amazing job winding in circles while looking up and begging eye contact. It's pretty impressive considering he doesn't have much in the way of a neck. 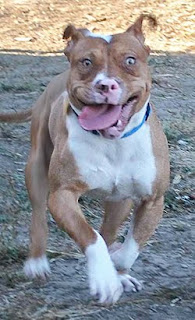 His sidekick Robin is a happy kid of a dog with crazy party boy eyes. He's our new favorite comedian dog. He's got a muscley little body, a low center of gravity and a big appetite for the flirt pole so we're having a great time with him already. We love us some Robin.

Sad to say, but it's already time to prep for the winter rains that will be here soon, so we're game-planning around weather proofing the barn, securing the fences and will be adding a healthy layer of gravel around the perimeter to keep the mud to a minimum once the rains take hold. After the barn puppies left, we tacked the star pattern tin ceiling panels on the walls to protect them from hose splash and busy diggers. We're rather fond of how it looks now.

Thanks to everyone who contributed to our photo contest last month. Your entry fees and votes helped us bring the Ohio boys here and are making it a whole lot easier to house them in comfort until they can move to foster care. Stay tuned as they work their way into our program, and our hearts. Below: Chunk discovers the joy of a butt scratch. 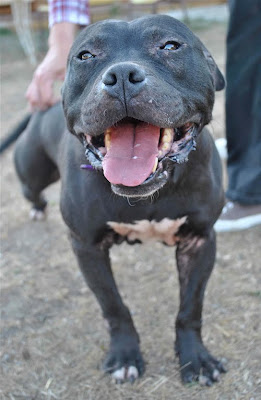 Gotta say, not sure exactly what this guy was doing with these dogs --but at least they're all amazingly cute.

Prolly puppy miller, methinks - for sale to whoever, wherever for whatever. Yes - very cute dogs from this case. Good luck with yours Brent and thank you for taking them in.

Chunk reminds me of dear sweet Nelly.
Robin looks full of pi** and vinegar as they say.
Would love to see some more pictures of the inside of the barn.
Glad to see you`re not spoiling them(much).
Someday I hope to have a leather chair.
I used to take my boy to a friend`s house and he`d head right for their leather chair.It really must be a pit bull thing because my Lab could care less.

Okay, that picture of Robin running is WAY too goofy/funny/hysterical. And Chunk? Well, he knows he's landed in the gravy.

Looks like the barn is turning into a real homey place! Your new additions look very happy. Two of our Ohio dogs are available for adoption all ready -- some may go to Animal Farm Foundation. Maureen really wants to check it out, it's her idea of heaven-- rehabilitating pit bulls.

PS I agree about puppy mill theory. But how to explain the boars, turkeys, and extensive collection of weaponry?

I love all the pictures. They look like the each have very specific characteristics. And I love that you bought them leather chairs. Keep up the great work!! You are amazing people!

What sweet pictures! Love Robin's crazy eyes, and Chunk has an adorable smile.

all those little black dogs ya'll keep getting remind me so much of Doe-Koo. so awesome! that pic of robin is HIGH-LARIOUS!!!! party boy!!!! good call on the leather chairs i know our hounds love them some chair time.

I'm with J.M. I thought you had posted a picture of sweet Nelly.

These boys epitomize HAPPINESS. It's amazing how dogs can overcome the bad things in life and live in the moment. We could all learn lessons from them. Maybe if people were more like dogs this would be a much better world.

Wow! CHUNK and ROBIN are g o r g e o u s. Love ROBIN going bonkers with the ladies... CHUNK was already neutered? What flippingamazing smiles these guys have! And what a so deserved life now. Their very own specially shopped chairs in beautiful runs, almost brand new barn, super cool star pattern tin ceiling panels covering backs of runs. They are beri beri lucky dogs. You and Tim must be bone tired when you finish your barn chores. Five paws up to BAD RAP. Hope one of these fine days to be in your hood. And would be honored to do barn chores am pm and in between.

Wayne's blog today has a write-up on the Ohio dogs, and a link to this blog entry! WOW.
http://hsus.typepad.com/wayne/

Back to the chairs for a moment...unfortunately for me here in PA, the bedbug invasion now prevents me from getting any furniture from Goodwill or Salvation Army...bummer....hope they don't make their way out to those beautiful Oakland Hills Donna!

bed bugs! oh no! hadn't thought about that. we haven't been scourged by them yet in our area, but if we do, you can bet Linda Chwistek will be training the dogs to sniff them out! :-)

Of Pit Bulls and Patience said...

We're happy to have a few of these Ohio babies at the Animal Welfare Society in chilly Maine. Extra comfy blankets and lots of snuggling is definitely in order. I'm getting to foster bug once again (let's be honest, one pit is never enough). Happy Pit Bull Awareness Day!

Cant wait to see updates about them! yay!

OMG...I'm halfway to being in love with Chunk already. He is one gorgeous boy, and the newest post describing his walk around the golf course has me thinking about how I can rope my husband into bringing him home. I'll be keeping an eye on him!