Right on the Nose 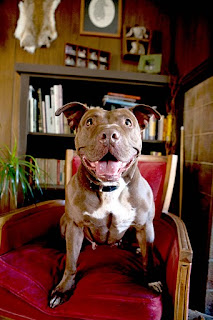 Below - A report from Elizabeth Kennedy on her recent nose work class with Linda Chwistek. Thank you Elizabeth (and Linda!)
______________________________
Confession: my dog Stella and I were “dog dancing” flunkies—as it became clear she was not destined to be a Rockette, I cast around for a new calling, something that would suit a sensitive little hunter.
Then along came nose work. A sport that builds upon a dog’s natural ability to locate a scent, nose work starts dogs out on a course with a basic, strong smell—say a bag of stinky treats—hidden in one of five boxes all lined up. They’re walked on a leash beside the boxes and rewarded when they pick out the treat box. From there, the game is refined—with boxes scattered everywhere, less treats in the box, things being hidden higher, buried deeper, stuck in stuff other than boxes, on cars, on grassy outdoor courses, you name it. As the dog advances, so does the game. The idea, at its essence, is just to set the dogs free to do what they do best: act like a dog.
Every single dog in this class—without exception—loved it. And that only makes sense. Dogs have 220 million olfactory receptors to only 5 million for humans. That means they can smell forty-four times as well as we can! They’re designed for this sport; it employs the tools evolution afforded them. Dogs are able to follow a scent like it's a thread right to a source. Watching the satisfaction the dogs got in hunting, I was reminded (silly human!) that dogs have their own native intelligence, way more keen than the paces of sit, shake, roll over we often put them through.
And beyond their genetic predispositions, dogs get such a boost from this work. Take little Stella, for example. Some might say Stella has been something of a scaredie cat in her day. Rescued by officers during a drug raid in her hometown of Detroit, Michigan, she’d come to fear a good few things in life, boxes among them. But take a look at her on the job here, sticking her big ol’ anvil-head straight into boxes, coolers, crates, and cones, all on the hunt for the buried treasure. You’d never in a million years know this dog had a fear in the world. And neither would she.


Stella locating the source hidden in an apple basket.

Stella is excited to be working.
Posted by Donna at 5:36 AM

That is very neat!! I think my pibble would love that, she has one hell of a nose!! Is this something that there are classes for? Or just something that I could set up at home? (I'm in SE Wisconsin)

She looks like she is having so much fun being a dog! She's so gorgeous!

Her tail says it all!!! Great stuff.
Krista

Did you find this class at a local trainer? Looks like it'd be loads of fun

K9 Nosework is awesome. We started out in it after reading about the workshop in the BR Blog several months ago and our dog loves it. She is the only pit in the class and is one of the best. She has a relentless drive to find the odors. This is a great outlet for the dogs. I highly recommend all pit owners give this activity a try. - Steve D.

anne - nose work is catching like wildfire all over the country. I don't know where you iive, but you might want to check with your local trainers to see if they know of someone who's starting to do it.

Awesome post! Does anyone know of any resources for trying it out at home while I wait for a nearby doggy school to offer a class?

My Cardigan Welsh Corgi and I just started in NW level III and are totally hooked. Galaxy is so into this, and it's amazing to watch her focus. I'm so glad it's catching on, as it's a low impact sport, that is so beneficial to dogs- so natural!

I also love that Nosework is a great starting sport for insecure, or dog reactive dogs. Since it's all about the dogs ability to scent, and search, and there's no dog-to-dog interaction it's really a great start for those dogs who may not do well starting in a more dog-heavy sport such as agility, flyball, or obedience.

For classes and seminars check out www.nacsw.net.

Local Pit bulls can look forward to another Vallejo, CA introduction to Nose Work class and a continuing class soon. See you there Stella!

I remember Stella from last year's bust dog calendar. She looks like she is having an amazing time, and showing great confidence. Maybe we can start doing it with our shelter dogs?

What an amazing success story!

To our new beginning:

Yes, this has been very easy to do at home with our pit. we even do it where Coco has to stay in a sit while we hide the piece of cheese or small piece of hotdog. Sometimes we just throw it while walking backwards (with more obvious fake throws to distract), but you could turn the dog away and hide it. Perhaps to start put the food a few feet from the dog in the open, then let the dog see you hide it in a close and easy place, then make it harder. Because it does work with a natural behavior it is super easy and fun to do.

Love that first video when Stella catches the scent. Great to watch her figure out the problem! You must have a good instructor. :)