Behind the names: the muses of the contest winners revealed 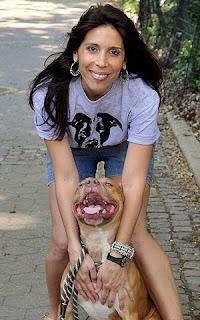 Behind every supporter seems to be a great dog (or more), so on the heels of our naming contest, I present you with photos of the muses who fuel the good deeds of their people.

Susan Cava (right) named the mama dog - "Eva Peace."
Some of you might recognize her as NYCKitten on the message boards. She has the rescue vibe going strong and is shown with one of her group's (Rescuzilla's) foster dogs. Deacon just got adopted to an awesome guy - a truck driver who takes him everywhere. Well done Susan and Rescuzilla! 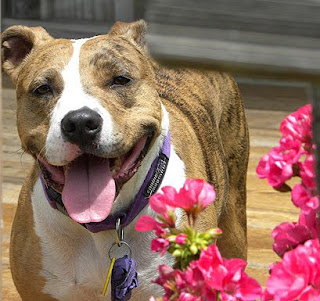 Sheri Cardo's girl Sally whispered puppy Rosalie's rightful name in her ear, and then went one step further and suggested that they both foster her home at home. 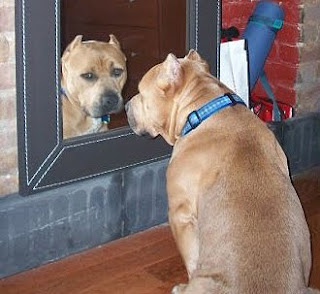 Alyssa Carolla named Ferdinand. Her sexy boy Primo came from NYACC and is now living the high life in Manhattan.

She told us. "The macho name doesn't suit him well at all, but we think it's really funny and often take to calling him Primo-donna, as he's a bit of a wimpy princess. We just celebrated his fourth "birthday" by passing the CGC." Congrats to you both and thanks for naming our gentle bull, Ferninand. 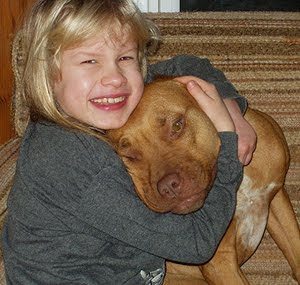 Lissa Stiles (whose handle is 'dogcat' when she posts comments) lives in NC and said that she was surprised that Ken chose 'Hypatia' for a pup since it's off the beaten path.

She explained, "It was the picture of her staring at the sky in the slideshow that did it. Hypatia was also an astronomer, as were most of the philospher/mathemeticians in ancient times. That she was persecuted and ultimately murdered by an ignorant, fearful-of-educated-women, unwashed Christian mob I was hoping no-one really knew, but I guess the persecution part is fitting for our lovely, misunderstood breed." Indeed.

This is her girl ChiliPepper, who's caught in what she calls "the head lock of love." - LOL! 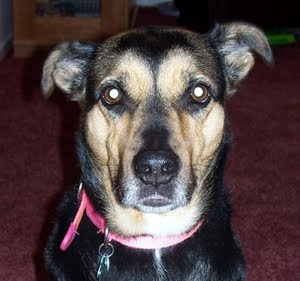 How much do we love this dog? Lisa Wolverton's girl inspired the name Sanjay for the boy runt. A fitting name, fer sure.

Lisa lives in Oregon and says, "My dog's name isn't Sanjay, alas. It's Wendy and she's a Heinz-57 pound-dog.Thanks for all that you and Ken do for pit bulls and for American who need to be better educated about them." Thank you Lisa. We couldn't lift a finger without dogs like Wendy prodding their people to support the underlings. 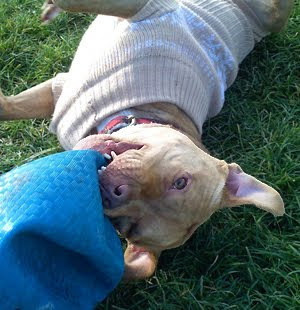 It was fun to see a BR alum win the name contest by naming 'Pepper.'
It was Andrea Vu Chasko, who adopted Bailey - a hurricane katrina refuge. Andrea's girl inspired this poster, which celebrates shelter dogs. She hopscotched from storm victim to foster dog to living life as an important helper in Andrea's classes for special needs kids. When she's not working, she's practicing the art of being a lump of love in Andrea and John's home in Massachusetts (gosh darn it you guys sure move around a lot!). 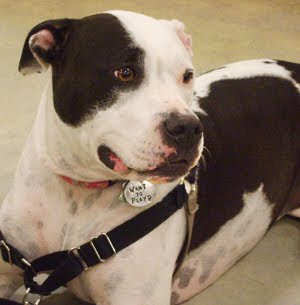 How cool that Samantha Wood's girl Lulu Belle looks just like the black and white dog that ended up with her name - Josephine.
Another coincidence: Samantha, who lives in North Carolina - told us "Maybe it's Karma or coincidence but my husband has been in N.O. since February on a work assignment and I've been challenged with raising 3 rascally pitties and 2 top cats on my own. We needed some good fortune!" Good luck with all the extra work Samantha. And thank you for taking time out of your busy day to enter this contest. 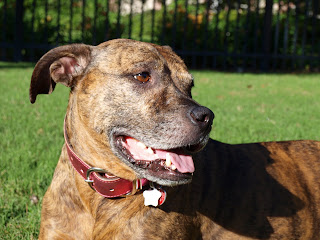 Sarah Williams' love for critters is inspired, in part, by the handsome Riley. She came up with the name Camelia - a perfect name for a flower of a dog.

Thanks again all. Ken will be sending your books out pronto and Susan's tshirt is on the way. Have a great weekend!

Those are some beautiful muses you all have!

If Sarah's dog is female, the gender split of the muses is the same as the barn family: 6-2.

Also, the gender split of the puppies is the same as the collective children of the last four presidents. Not that anyone wanted to name them: Sasha, Malia, Barbara, Jenna, Chelsea, Jeb and George!!

Agree these pups are inspiring. Deacon looks a little like he could be my cousin. He needs to share his road stories.

Primo-donna, I'm a little bit whimp myself and you must be proud like me being a CGC.

Don't you know that ChiliPepper comes back for more of those head-locks.

Wendy is unique like our Alpha, Sheena = heart x (# of breeds).

Bailey you got some cute going on. I'd like to hear more about your therapy work as I'm thinking about working with special need kids that turned into adults.