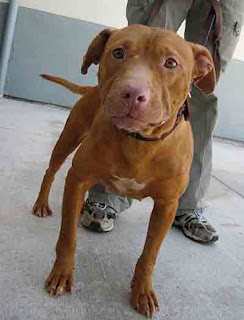 We've been sorting through the dogs that were seized last week during Oakland Animal Service's raid on a notorious backyard breeder. As is all-too-common with cruelty cases, most of the dogs are squishy sweet with people but under-socialized to the real world and to other dogs. Most have skin problems and/or deformities (especially, 'flat feet') from their history of neglect and confinement.

We pulled four of the dogs into our program today. Many have already been put to sleep. We have our work cut out to help them catch up from a crappy past, but they all showed us the good stuff. More later as they settle in, get named, etc.

For now, here are the fab four ... Out of the breeder's hellhole, and into a brave new beginning.

omg they are all soooo beautiful!!! i love that chocolatey coat they have and the little black pup is just precious!! they all look so friendly and its so nice to see their tails wagging happily in spite of the crap they've been through. dogs are so resilient and i'm sure these guys will be fine and adopted soon. the adult mature female pit is gorgeous. i love her wise eyes. you know what? i've never actually seen a pit bull terrier before like in real life i mean.... i don't think anyone has one in malaysia.. but i'm convinced they're fabulous. keep up your good work!!

Want, want, want, and want. Pleaaase can I just come and kiss all their noses. They look irresitable.

I fell instantly in love with the little black puppy. However, since I have a little black bitch who wouldn't take kindly to another girl soaking up some of her princess time, I'll have to love her from afar. Best of luck with all four of them!

Yay, I knew you guys wouldn't just let them die. When I saw the news and how they said they may have to put them all down. I thought to myself, BADRAP is going to save them.

I have a beautiful chocolate pitbull rescue who we took in as a foster and ended up keeping. He was challenging at times. He always had a good heart and nature, but had not been well socialized. Now he is a gentle, loving angel who I love with all of my heart. If you are wondering if taking in one of these dogs is worth the effort, IT IS!!!

Since they are the fab four, naming them should be easy. Lennon, McCartney, Harrison and Starr.

Can you feel the love? You guys are my heroes.

Thanks for all you do.

Thank you for saving them, especially the mature female. I hope they find good, loving homes, which I know they will now that they're with you. If only I didn't have four dogs already...

Wonderful x 4! You can see it in their eyes - ready, willing and loving new life! Here is a quick story of another lucky pit - rescued by an electrical worker from a ditch. http://www.heraldpalladium.com/articles/2010/03/21/local_news/1290299.txt

Oh! Good luck with these 4 little ones! I'm sure they'll find their ways to wonderful homes.

Oh my God they are adorable! I wish i could have a whole bunch! Our pit is a rescue, so we understand their capacity for gratefulness. (Max, our baby, was abandoned and left on a chain to fend for himself.)My life hasn't been the same since he came into my life. I hope those babies find a ton of love! Keep up the good work!

sarah said...
This comment has been removed by the author.
1:29 PM

I'm glad that everyone is involved in helping these dogs out. When I heard the news I thought, "What happened to making euthanasia decisions on a case by case basis???" Thank-you guys for at least evaluating them and giving them a chance.

Most of the dogs are dead now. We did the best we could under the time constraints and some were saved.

It hurts -- it always hurts. We'll give a little tribute to the dogs that didn't make it once we get over our funk.

So sad.. I thought there would be a few more days to try to get them into rescue programs and also the possibility of compassion holds for the less fortunate.

Thanks for scrambling to take the four you did. I am pleased you took an adult dog in addition to the puppies.

I am angered by the people who allow this to happen. Obviously, the abusers themselves, but also the neighbors who know it is going on and do nothing to stop it. This is not Kansas. We live in close quarters here. You can't hide something like this from your neighbors.

Would like to see more outreach in the schools. East Bay SPCA has a program called TLC, an after school program for middle-schoolers teaching compassion for animals by having them work with the dogs. We need more of this and we need programs that incorporate pit bulls because I know there are people who think of pit bulls as different and less deserving of loving kindness than "regular dogs".

We're disappointed too, Diane. Yesterday was a tough day for many of us.

Hi Donna, I'm continually humbled by your dedication. Please educate me. I hear a lot about these cases where the poor dogs are held endlessly as "evidence" with no walks or stimulation. How was OAS able to let these poor babes go without the court case being resolved. Am I misinformed? Just wondering if the laws regarding this have changed for the better.

I'm so so sorry. I was thinking about you after I sent you the youtube link, I turned on Animal Planet and had Tim and Donna and Marthina in my living room! Please know my thoughts are with you when you have to go through these tough times.

Leslie - a judge released custody of the dogs to OAS late Thursday. This wasn't a fighting case, but the city hopes to get animal abuse charges for the hoarding conditions they suffered.

At least some were saved. It's always heartbreaking when innocent lives are cut short.

Don't give up. There are so many more dogs that need your help.

I've heard that there are still some of the puppies available from this case, is there still hope for them?

Anon - We're not sure on the status of the pups. So sorry!