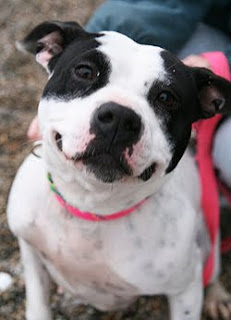 A federal prosecutor in Michigan made a recommendation of euthanasia for a group of dogs swept up in a cruelty case this past summer. The problem is, the Humane Society of Kent County has been housing several of the dogs for months and believes that they're adoptable.

The solution? Kent County Humane hired a lawyer and filed an affidavit to argue in favor of letting the adoptable dogs live. (backstory)

Guess what? They won the case today for 11 dogs in their facility, and they also won the right to evaluate five dogs that have been housed in a different facility. STORY: Judge spares dogs.

Right: 'Froggy' just won the right to a real life with a qualified home.

"We've spent nine months with them," Terpstra said outside the courtroom of the dogs in her care. "We would not make dogs available that we feel would be a danger." - Karen Terpstra, Humane Society of Kent County

This case is significant as it sets a precedent in Michigan that will affect the survival of future victims of cruelty. Up until today, courts and animal control agencies have used a vaguely worded Michigan statute to condemn dogs from cruelty cases to automatic death. Today, Judge Lawson demonstrated that the law has been used inappropriately to destroy dogs, and he set an example by allowing a qualified animal organization the right to treat the dogs as individuals. In a state that suffers from perennial BSL threats and breed discrimination, this win is a biggie.

We were keeping our eye on this case since we first learned of the dogs' plight and, and are just jumping up and down around here with the good news. We salute the Humane Society of Kent County for their MAJOR CAJONES tonight and are celebrating this victory for the dogs.

It seems fitting to play a little song from Detroit band Ranconteurs for all the people that rocked these dogs out of the hands of the bad guys and into the compassionate care of this organization. Turn it up.

Please keep your eye on this one. The Humane Society of Kent County is still trying to save two dogs from the group, and will return to court in two weeks to plead their case. Send your thanks here: humane@hskc.org
Posted by Donna at 5:32 PM

It's so awesome to see Humane Societies stepping up in a big way to speak for these dogs. LOVE IT.

My folks live in the area and have been keeping me updated on the case. The local news stations have been going crazy over this story and covering it heavily. There's another good video here:

Apparently Fox 17 showed more of the dogs on last night's broadcast, out of their cages and playing. You might want to check out the website in the next day or two to see if it gets posted.

This just made my day!

BRAVO! This is inspiring...I have no doubt this case was influenced by the Vick dogs getting a chance... what a fantastic ripple effect. Thanks Bad Rap for creating it!

Kudos to all involved!

As a Michigan resident, I am delighted that Kent County Humane went the extra mile for these dogs! I hope there will be more to follow.
dottie

Wonderful news! Hooray for those lucky dogs and their future families...

I literally was JUST in a coffee shop in Grand Rapids buying a coffee and I look down and see this headline "Pit Bulls Ready for Adoption" with the sweetest faces on the front page. I got SO excited I bought two papers!!!!

This is HUGE for Michigan!! I continually fight the ongoing BSL that comes here.

I AM SO EXCITED ABOUT THIS HEADLINE!!! I even was making the barista listen to me!!!!!

Rad! Stella sends wild pup love back to the comrades in her homestate! Woo!