Endangered media. And, we meet a hero 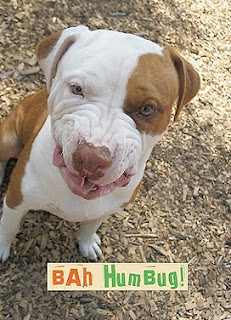 News Cycle reported last week that over 15 thousand journalists were canned in 2009. After suffering more than two decades of character assassination of pit bulls in the news, some might be tempted to say "Bah humbug! Who needs'em!" ... But the worrisome part of this trend is that it threatens to rob us all of whatever ethical journalists might still be out there, while opening the door to yet more tabloid bombers who steamroll over facts in a hot hurry to file shocking headlines and crap reporting.

At a time when pit bulls have reached a tipping point with widespread positives in the media, we really need the good guys to stick around. We're all too familiar with damage done by the fear-chasers. Brent Toellner ran a fascinating series of blog posts recently about David Gardner's book The Science of Fear, which includes some discussion of the media's role in paralyzing the public with demonic, media driven stereotypes - which includes pit bulls, of course. KC Dog Blog. Brent's research offers solid 'know thine enemy' kind of reading.


BR members have had more contact with the media than we ever thought possible over the last two years, and despite their history of ick and our own initial fear and prejudices, our experience with journalists has been overwhelmingly positive.

It wasn't just that we had a winning story - victimized dogs resurrected, and all - how can you lose, really? But the people writing their stories were ... fabulous. Warm. Thoughtful. Where have they been hiding all these years? And now that we've found them - or rather, now that they've found the dogs - are we going to lose them completely to this downward spiral in the news industry?

Nearly every single writer we've met has relayed some concern about losing their jobs during our get-to-know-you conversations. That includes John Glionna of the L.A.Times (above), who is just the kind of reporter we want on the dogs' side. He made several personal visits to learn about his subject, even allowing our dogs to swarm him during his interview for this flattering article that makes pit bull rescue - important. (John has since starting covering stories in Korea, by the way. He may be far from pit bulls, but we were glad to see he's still using his pen for important animal issues) 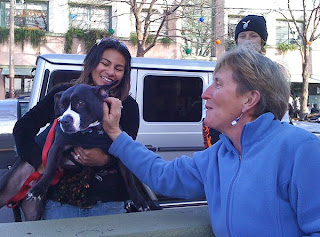 One of the biggest voices for pit bulls in the news media came to the SF bay area last weekend for a visit. We were thrilled - thrilled! - to finally meet her.

Cheryl Wittenauer, writer for the Associated Press, introduced the Vick dogs to the world in this precedent setting article that was launched to hundreds of media outlets around the world the minute the last defendant in the Vick case was sentenced and we were free from our gag order. Not only did she keep her word and honor our request for strict confidentiality during her research, she wrote her piece with so much compassion for the victims that she turned the previously reported 'Menacing Dog' business on its heels and set the tone for the avalanche of positive media that would follow. During the time that she interviewed our crew for the story, she held a curious and objective mind, and avoided baiting us with fear-fetching questions. She later went on to write some of the more compassionate articles about the dogs from this summer's big bust in the midwest. She's truly one of the most important media voices for our breed right now. Left: Cheryl nuzzles Vick dog Zippy, who is held by her foster mom, Berenice Mora-Hernandez.

I hope people like John and Cheryl find a way to ride out the lay-off storm so their curiosity and professional integrity can continue to benefit the animals. It's one of the main reasons we always have to remember to thank the editors when their publications run a good piece. Not only are we ensuring that positive press continues, but we just might be helping to secure the job of the writer so they come back to do it again.

Below: Cheryl spent the afternoon with six Vick dogs and their people during Pit Ed Class last Saturday, including Daisy (bottom right), one of the survivors from the big seven state dog fighting bust. It's been almost two years since her celebrated Vick dog article came out, and this was her very first time meeting the dogs. We had a blast! 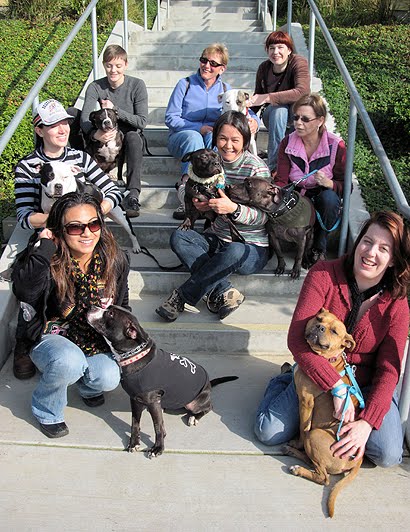 Thanks for the update, I'll be keeping my fingers crossed for all the wonderful journalists out there.

As for the bottom picture... would you LOOK at Miss Daisy's face? Does she practice those adorable smiles?

It's also up to us, to keep the flame going. We the responsible owners. Those who walk their dogs in their neighborhoods daily, letting their neighbors see what amazingly wonderful pets the pit bulls are. Taking our pit bulls out and about, showing the world how well-behaved they are. Bringing them, as they can depending on the dog, dog parks, doggie daycare. Showing the world that our amazing dogs are just that dogs.

And then, should our press advocates find themselves without a home, we take it upon ourselves to groom new advocates. Give others the opportunity to have a growing experience. Let their hearts grow 3 sizes too big. Let their fear be changed to wonder.

Happy & Safe Holidays to One & All,
Leila & Quizz
Richmond, VA

I love this Lelia...

"we take it upon ourselves to groom new advocates. Give others the opportunity to have a growing experience. Let their hearts grow 3 sizes too big. Let their fear be changed to wonder."

So I just saw this promo for a new show coming to Animal Planet...
http://press.discovery.com/us/apl/programs/pit-boss/

and then I went to the "Shorty's Pits" website - http://www.shortentertainment.biz/PitBulls.html - and noticed that the majority of their copy comes (uncredited) from badrap.org.

Would love to her Bad Rap's thoughts on this show.

There are others of us out there: mainstream journalists who own and love pits. And we're doing our best to spread the word! ;-)

http://www.badrap.org/rescue/responsible.cfm
which you have marked as copyrighted has been lifted word for word here:

Yep - looks like Shorty really likes much of BR's content. Sigh. They say imitation is the best form of flattery, but this kind of imitation is frustrating (and illegal).

Anon 10:59 - thank you for being out there as a voice for sanity and compassion! Wishing you lots of print space in 2010.

This gets me very sappy because I know first hand what beautiful dogs pitbull's are... keep up the great work everyone!

Great post! It really is great to see journalists who are not focusing on sensationalism.

I re-read the LA Times article, and I have difficulty reading quotes from PETA representatives. How can they comment when they have no first hand experience (from what I can see)? You would think that from all the money they bring in (from having ignorant high profile celebrities as their poster girls), they would at least study the subject first hand before offering their views as a so-called expert. What does PETA "do" with their money?

Keep up the amazing work...you have truly done something ground breaking with the Vick dogs. I have two pit bull rescues, and I definitely notice the difference in reaction when people see me walking them. I used to prepare to give a lecture on pit bull myths when people asked about their breed. Now, I have people telling me that they get a bad rap.

Holy cow. They copied BR's entire web site word for word! Everything but the "links."
SD

PETA kills 95% of the animals they take in, including healthy kittens and puppies. I have a friend from Bengal Breed rescue who turned over healthy kittens to them and was part of the law suit against them in Norfolk VA. They ended up only being charged with littering! I don't know why any responsible journalist would quote them.

Sensationalism and fear may sell, but a compelling and well writen story makes a lasting impression on the reader. Let's hope that there are always readers, writers and editors who value quality and substance over the easy pandering fear.