Using bad news to do something really radical ... Educate

An article in today's Salinas Californian is a great example of how the media and animal control can use a bad dog experience to educate the public rather than hype up hate and alienate dog owners....

The bad news is a fourteen year old boy was left in charge of his family's strong pit bull, who pulled him straight towards three leashed and barking chihuahuas during a walk. One chi was bit on the leg and the chi's owner's suffered bites breaking up the ruckus. You can just imagine how some most media outlets would spin this story. 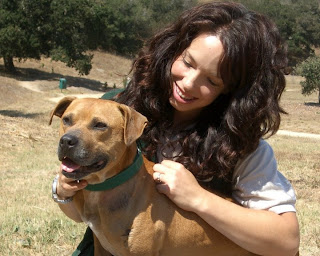 Instead, the paper chose to highlight dog owner responsibility in its headline and the story was aimed and reminding dog owners to keep control of their pets and to get formal obedience training if they aren't able to manage them. No beat up the breed, no screaming that fourteen year olds should not be allowed to walk dogs.

Officials gave very reasonable responses and pointed out that parents need to use common sense when deciding if their young teens can be responsible with walking dogs. To cap it off, the article used former Vick dog Red as an example of a well behaved dog who now helps other dogs. Above: Amanda Mouisset of the Monterey County SPCA with Red, a former Vick dog who helps the shelter socialize dogs,

Gary Tiscornia, executive director of Monterey County's Society for the Prevention of Cruelty to Animals, said a good way to gauge control of a dog is through formal training. At the SPCA, for instance, a pit bull named Red who was formerly owned by NFL player Michael Vick now helps train other dogs with aggression and behavioral issues. Red is also used to test other dogs' aggressiveness. "Pit bulls tend to get more press because of reputation," Tiscornia said, "[but] a great, stable pit bull is a fabulous pet." - ARTICLE

Thank you for taking the lead in educating, Monterey County SPCA. You guys get a two paw salute for the day.

Someone needs to find that reporter Kimber Solana and give her a kiss! And let their pit bull give them a big ol' slobbery kiss! Seriously!

We as owners must be responsible. "We recommend you should only be walking the dog if you can physically control it," said Cindy Burnham, the city's animal services manager." This was the a well-tempered answer that didn't feed into any hysteria. The article was well-balanced and objective. This is what we need to be seeing out of the media.

Kudos again to Ms. Solana and the Monterey County SPCA.

awesome! it is about time, someone did use "adult" accountability instead of blaming the breed itself!

thank you , thank you, thank you for providing balance and perspective--great job!

As a Monterey County resident, and a supporter of the SPCA, I am very proud of the job done by that agency, and of the article in the Salinas Californian. I will write them IMMEDIATELY!
Jean Nolan, Seaside, Ca
(P.S. - Miss AriMarie, the PitMix, who has always signed with me before, died of natural causes in June, at the age of 15. She was at home, in my husband's lap, and knew no fear.)

Yay Red and Amanda! They have both worked hard to help me learn how to be a better dawg mama, and Bunny learn how to behave in a more acceptable manner around other dogs....and their hard work is paying off...on both counts!

I heard about the situation that took place in Salinas, knew a pit bull was involved, and held my breath, waiting for the usual fall out. Luckily it never happened.

im so happy to hear this ! this has made my day!

This is the first time i have been proud of the place I called home for 30 years. Good job Californian!
Kevin & Clover!

We had a similar good news / bad news here in the DC area when a man was killed by his brother's pit bulls. The news identified them as "yard dogs" and pointed up what the NCRC has found.

Yesterday I left the shelter as the two CPDT's were doing a dog to dog evaluation. They had paired up an overbred Great Dane from a puppy mill bust with a male pit bull owner surrender. I heard them laughing as the dogs were clearly "romping" and the Dane looked joyous for the first time since she's been with us. We should try to get more publicity for the work our pits can do with other dogs.

Fantastic. It's very reassuring to see a straight-up news story involving a pittie and an unfortunate incident can be presented in a grounded, non-sensationalist manner. What's more, it offers useful info. :)

Great article, yet the intent and content was sorely missed by those that commented on the article itself. One reader even commented that Salinas should ban pit bulls! So it seems that no matter how neutral an article is written where specific breeds are mentioned, it is challenging to teach readers to read and process the material. How do we teach the public to think for itself?

The intent & content was not missed by "those" that commented on the article, at least not by the ones I read. I don't even see a "salinas" name as a respondent. If someone feels the need to leave a "ban pit bulls" on a pit bull blog then they deserve to be called out on that comment.

I think for myself every day! I can honestly stand by my reply of above. "awesome! it is about time, someone did use "adult" accountability instead of blaming the breed itself!"

CK0712,
think the comments in question were on the site of the original article...i noted them there as well.