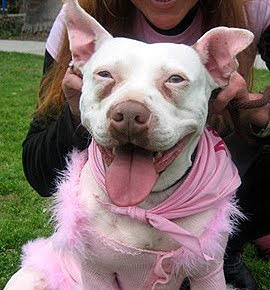 The barn raising project has brought the added bonus of helping us realize just how many people care about the disenfranchised pit bulls of the world. It feels so good. Tim wrote earlier about the personal notes that cross his desk during his late night catch-up chores and the unexpected emotions that come up when connecting with people who care so deeply. We were taken aback recently by a note from a SF bay area gal named Tana Madrigal who's been watching us since the Vick dogs came home. She told us that she wanted to help the barn project and she offered us 10K if we could raise another 10K in matching funds. Wow. We knew there had to be a pit bull story behind that incredible generosity...

...It turns out that our kind benefactor grew up half a world away in the Philippines, surrounded by her family's pit bulls. Now her heart is in Los Angeles, where a little orphan named Blissy Lissy (above) is waiting to come home to meet Tana for the first time and become a part of her family. Lissy was found by two Best Friends members in an east LA shelter, covered with many lacerations. She is deaf - which tells us she's extra special. I love that this former street stray is getting a fresh start with someone she's never met, and at the same time, so are the dogs that will be finding safe haven in our barn. Thank you for following your heart, Tana. The dogs are blessed to have you on their side.

$1898 has already been raised towards this big matching gift challenge. If we can raise an additional $8012 (wow, that sounds like a lot), we can jump our bar up and over the $60K mark. Holy moly. 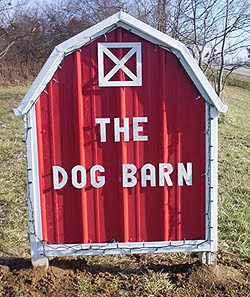 Lissy is a beautiful girl! Deaf dogs are extra special-wonderful-amazing, I wouldn't trade mine for the world. Is Lissy going to be moving to the Philippines or has Tara moved to the LA area?

I recognize that little dog! Did her name used to be Lisa Marie? I always thought she was soooo darling, I would be ecstatic if she found her forever home!!

You should be getting a mushy card and check from me, too. I hope it did not get lost again!

This is* Lisa Marie (nick name Blissy Lissy) -- and she's moving from Los Angeles to live with Tana in the SF bay area. We're looking forward to meeting both ladies.

This is the best news of the day. I have had a little pitty crush on Lisa Marie (Blissy Lissy) for a couple of years- I first saw her on the BF website. She is a heart stealer, even from afar! So happy she has found her person and her person is helping with the barn!

Aww, she reminds me of my deaf pittie girl, who I rescued from a shelter. She was picked up off the street, had mange and was missing hair, and no one wanted her. My husband and I fostered her, ended up falling in love and adopting her ourselves. As doc sinister said, deaf dogs are the best!

Oh my, I finally figured out how to donate via paypal by bypassing my actual wonky paypal account. A whole new world has opened up to me!

Love the deafies!!!
They are great dogs....so attentive....and fun.
There does seem to be quite a few deafies needing homes lately. Another recent LA county girl has been adopted to a great home in N. Cal. Another local girl just adopted by a friend....
Even started a deaf dog training class specifically for them!!

Hey, TEH:
There are more than you know. A deafie from Kern County now resides in SF. My brother adopted that deafie from LA. Another deafie adopted in Hesperia. Another needing help in Los Angeles. Another from Kern County sent to a rescue near Santa Barbara. The deafies are coming out of the wood work.

All pitbulls or bullie breeds.

I am so happy to hear about Lisa Marie and her new home. Congrats to the new deafie mom. YAY!!!!!

We need a ton morelike her!

What a nice thing to read today! Will be sending in the second installment of my donation tonight! See, the payment plan actually works best for all -- it'll count towards this match. I remember when you first, ever so hesitantly, mentioned the Barn project in one of your posts. The success shows how extensively Bad Rap has touched a heck of a lot of dog lovers, suckers for the pitties and underdogs especially!

And look at that bar go up. Congrats!

Donna,
we just donated, sorry it couldn't be more.
I would love to see you guys reach that match!!

It's a privilege to contribute money to Bad Rap knowing that those who cannot help themselves are being helped. It's beyond an honor to read your blog and suddenly find my own name. Thank you for all you do.

The Lord loveth a cheerful giver. He also accepteth from a grouch.
your family Happy Holidays and a great and prosperous new year!