This has been a weird summer of celebrating and grieving. The dogs from the Missouri centered dog fight bust have been front and center of our activities and brain space and, 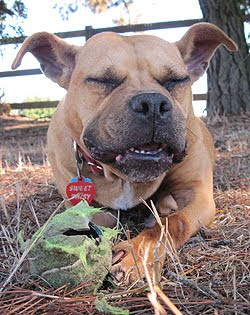 while many of the released dogs are doing well, others that have come with difficult medical or behavior issues have not had the happy endings we all like to celebrate. We're big on doing compassion holds for these dogs, one at a time. Our volunteer crew has been especially giving with their hearts this summer and while we keep these dramas on the down-low, behind the scenes we've been working hard to maintain our optimism and after having good cries from the belly, moving on to the next dog or group of dogs that need us. I don't want to use this entry as a macabre list of dogs that have died (although we will talk about certain special darlings at some point) but I wanted to start to prepare pit bulls lovers for the inevitable .. Through no fault of their own, a LOT of victims of cruelty from the big raid are going to die this summer/fall. We promise to do everything we can to bring dignity to the dogs whose deaths we're able to be a part of.

None have done that better than Molly Gibbs, who was taking care of Daisy for us (above) at the same time that she was letting go of two special darlings from the Oklahoma centered bust dogs of Claremore Animal Shelter. She wrote an essay on what it was like to put two bust dogs to death. It's worth reading - slowly - when you're in the right frame of mind.

The taking of life is something not to be borne lightly or without reflection on a heartfelt level. This is something I learned from my Grandfather, who had been a field surgeon during WWI. He said besides performing triage and surgeries, he had to help those who would not live die with as much comfort and dignity as possible. Today such conversations with a young child would probably be frowned upon ... continued.

In the meantime, we are celebrating Miss Daisy, who somehow defied the odds by getting a foster spot. She landed in SF last night and waltzed off the plane like a seasoned war veteran who can't wait to get back to the living. We cling to her good news because she's such a reminder of the old soul perseverance of the breed during trying times. We have a lot to learn from Daisy. And how much does this little dog look like (another) gargoyle? We seem to be blessed with gargoyle girlies in our corners this year. Go figure.

Thank you for sharing. Her story was indeed terribly sad, but perfectly true. And I agree that this part of the story must be told. I'm so happy to read how these unfortunate pit bulls are not grossly tossed aside, but instead are gently delivered from their lives. That is so important, and yet so hard to do. Thank you for sharing that those strong people exist and are helping this wonderful breed.

Bless you and all those doing compassion holds, over and over and over for doing this work. Providing days or weeks of the experience of what it means to be a loved dog is the most heart-filled act that can be done for these beautiful souls. My own heart goes out to you for the gut-wrenching tears that accompany this most priceless, generous, and selfless gift.

That was such a hard thing to read, but so true and it breaks my heart. I gave my rescue pibble a big hug just now, and I'm so grateful she made it out.

teary eyed now but oh so thankful for the strong hearts of the humans and dogs that give me so much hope. and yes she does look like sweet nelly.

Molly sent me over here. I'm glad I visited. The gentlest dog I ever met is a sweetheart of a pit bull named Smokey. You are so right: These dogs get a bad rap and it's just not right.

What a wonderful gift of love it is that these people gave the dogs.There should be more people like this in the world. As always Donna & Tim, you give us truths to live by.

A friend of mine from Bengal Rescue once said - if you think of your work as using a coffee spoon to bail out an ocean, you will always be discouraged. You can only save them one at a time.

It gave me pause and an uplift. Thanks for all your good work.

I wanted to send you this Bad Rap from Gracie and Goosie, two of my Bullies in the pack of 6...

Mankind's true moral test, its fundamental test (which lies deeply buried from view), consists of its attitude toward those who at its mercy, animals.
Milan Kundera

always thinking of you as I see my BAD RAP bumper sticker. God Bless you and your work.

oh my lord i dont think i've been so sad and cried so much in a long time. bless your hearts for being able to do these compassion holds . i would only hope to be strong enough mentally to one day be able to do that .but the way i get attached to the dogs i would be a very broken person in the end.how do you apply to foster any dog? i mean i would be happy to help foster any dog as long as one less dog dies . you can ck out my blog and see how spoiled rotten my "babies" are .i live in texas so i dont know how it works.but i'd love to help any way i can

hahaha.. look at his first pic above. so cute. I love this dog.

You know I love big dog like German Shepherd, Pitbull, etc. but as I saw this cute dog, I begun to like it. :)

Your blog features some gorgeous hounds and your blog title is 100% correct. I just did a post on Pits... they get a bumrap in every country :(

My gosh, who wouldn't love that face and smile! Just too cute☺

While it was so hard to read, I had to read it! Thank you to everyone who showed these precious babies what it felt like to be loved, even if for only a short time. They are with the angels now and I am sure telling them all about the wonderful folks they met and loved on the journey. In my book Donna, Tim and all of the people that worked to give these innocent victims a voice are the real angels here on earth. God bless you all and, on behalf of my three rescued pibbles, thank you, thank you, thank you. We all have so much to learn from you and I can only hope we are quick learners.

It is rather interesting for me to read that blog. Thank author for it. I like such themes and anything that is connected to them. I definitely want to read a bit more soon.