Rub my belly and I'll grant your wish 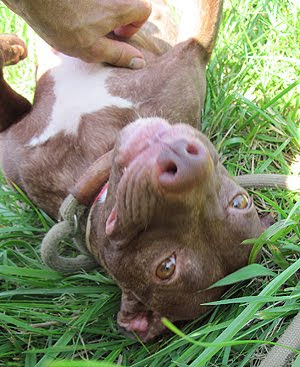 This pretty girl's wish was just granted. Now named 'Minnow,' she scored a safe haven with rescue group A Rotta Love in Minnesota. She's extry special because she's from the group of 'MO bust dogs' that were rounded up in the state of Oklahoma. Oklahoma was more than happy to work with rescue to save the victims of cruelty from this raid - a big sign of progress made!

Minnow has a compelling story that we'll be able to detail shortly. Thanks to many helpers, in a few days all but two of the dogs from that Okie grouping will be out of the shelter and with adopters, foster homes or in compassion holds. Fabulous! (The remaining two dogs were euthanized at the shelter due to animal intolerance issues.) 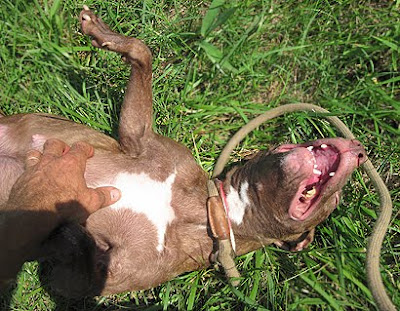 The Rotta Love gals could use some love themselves for this rescue and rescues coming up. You see, the agencies that orchestrated the MO dog fighting bust are not providing $$ help for the dogs, so rescuers are eating all costs, including pricey transport and any upcoming vet bills. (And no, we are not getting paid to evaluate or coordinate rescue efforts. Bleh.) 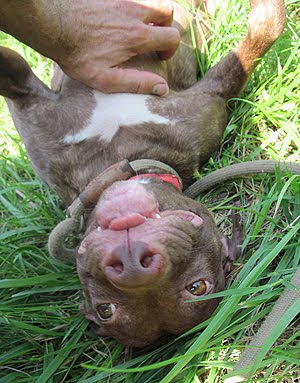 Not one to be deterred by obstacles, VP Lara Peterson made the long 22 hour round trip drive from MN by herself to pick this girl up and bring her home. It's a sacrifice we all make in the name of making sure pit bulls are given a seat on the bus as promised ... Necessary, but not easy. And such a big contrast at a time when millions are being tossed at Vick for his new role as reformed gladiator hero.

If you have a few extra bucks this week, please send them to A Rotta Love to help reimburse the high cost of saving lives. They certainly deserve it after going the distance to help a lowly fight bust dog in Oklahoma.
Posted by Donna at 7:24 AM

Excellent! Thanks for the shout-out to ARLP, an organization that is a great friend to the pibbles! And way to go, Lara! We have so many good pibbles here needing help, but sometimes you have to squeeze in one more. Welcome to Minnesota, Minnow!

Rock on ARLP and Lara! She is so cute and I can't wait to hear her story. I'm sure MN is lucky to have her. ;)

Minnow is so cute, such a sweet little face she has!!!

Glad to hear this good news!

Thanks so much Donna and BadRap for the ARLP shout out! I'm sure you had something to do with getting us there. Your continued advocacy, time, and tears for this breed is always soooooo much appreciated! Way to go Lara!!! Happy days ahead for Minnow! yeah!

If only smiles were gold - all pit rescues would be billionaires.

What a lovely girl, thanks for the heads up, Donna.

I just want to squish them all - those beautiful, scarred pit bulls confiscated from fight busts all the way to that shy, tail-wagging pit bull sitting on death row in a shelter.

Please squish the ones you are in contact with on my behalf. This will save embarrassment for Mina, my 11-yr-old pit bull who is SO TIRED of the squishing. :)

minnow is cute as.. well dont tell my boy darwin.. but she is about as cute as him, and i tell him constantly he is the cutest ever. yay for good people doing wonderful things for wonderful dogs.

Thank you Bad Rap for the shout out to ARLP and for all that you do for these amazing dogs!

This is a great shout out! Minnow is one lucky girl and a gorgeous one at that!