We didn't have time to mention Lolo this week with all the Wilkesboro news going around. This blue beauty just got two new knees! - a first for our organization. The double TPLO - Tibial Plateau Leveling Osteotomy - was the most we've spent on a homeless dog, but it was just too hard to say 'No' and put this girl to sleep. Lolo is a "foreclosure orphan" who got bumped out onto the street right along with her owner and his worldly possessions. The older African American gentleman cried when they took her away to the shelter; a volunteer who happened on the scene watched him crumble under the realization that his home was gone and his dog was probably going to die. She was already limping when we met her - a really bad thing for a dog in a shelter full of homeless blue pit bulls. Ugh. But, lookit this dog.... 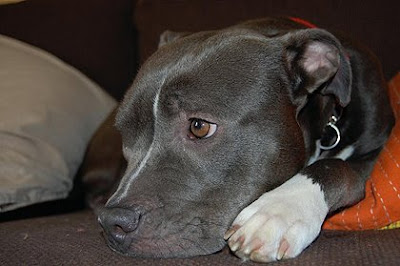 Her second knee blew out not too long after. It was destined to; she was born with a limited warrantee on those shaky joints and it ran out while she was trying to keep herself entertained in her kennel. These are the times when I really kick myself for getting into this work. What the hec was I thinking? This is insane. The seed money from her Christmas donor and from Paco's friends was a great start, but not nearly enough to fix two wobbly, throbbing knees, and Lolo's pain was getting worse.

Turns out Jonny Justice's adopters have racked up quite a few good karma points (not surprising) and used some of it to help out the blue princess. Their vet heard their plea and offered to give Lolo some new knees at a greatly reduced price. Dr. Richard Schwach has a strong handshake and he loves talking about this particular surgery. You can tell it still fascinates him; a good sign. He worked on her for almost 3 hours on Tuesday as part of a fast-moving team of four. Three hours to open, assess, measure, saw bone at just the right angle, fasten a plate & screws, sew her up and repeat on the second knee. She walked out the clinic door that evening. Yes - she walked outta there! 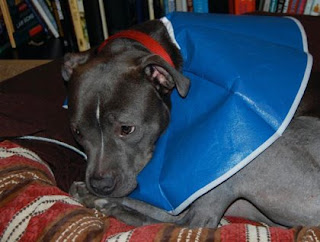 For the next 6-8 weeks, her foster parents Jamel and Letti (more Vick dog karma) and helpers Peter and Danae will be trying to keep Lolo from moving too fast or doing zoomies and all those other things our breed loves to do to celebrate a good day. Not easy!

I have the idea that, even if her former owner never sees her again, the fact that she's still alive will somehow broadcast good fortune to him - wherever he is. We take on very few of these heroic type cases because we hate to tap out our donors and we have a relatively tight budget, but this one really cost us, so if you can afford to help us out with this one we would be forever grateful. Thank you. And monster thanks to Avenues Pet Hospital and Dr. Schwach for being one of the good guys.

Good luck with Lolo's recovery, we've been through it twice now and it never gets easier. Wish we could help with the rehab, but for now Leroix and Nola have sent in a donation. Good luck and thanks for all you do.

Thank you for taking care of her! I wish LoLo the best recovery!!!!!!!

Many thanks to Dr. Schwach... many healing wishes to Lolo... and many, many prayers for her former owner. If only somehow he could know that she's okay.

Hooray for BR for taking a chance on this girl. I just spent $6K on my dog's radiation treatment (not including surgery), but who can put a price on how much she means to me?

Donna, thank you so much for all your hard work and decision making in giving all the precious dogs a second chance at love and forever homes.

It is wonderful to have good news and great happenings to end what has been a horrible week.

George and I have left a donation to help out on the bill for Lolo's surgery.

Aww what a sweetheart!!! Im sure Blue will be up and zooming around real soon. Bless you Bad Rap for giving her a second chance.

I wish there was a way to find her old owner and let him know his girl is doing just fine.
Thank you for helping her, BAD RAP.

What a sweet face! I'm thrilled to hear about Lolo's good fortune and successful surgery. Of course she walked out of the surgery....she's a pit bull!
Payday is next week.... we will find something to send along.
Thank you for helping that sweet little angel.

Wishing Lolo a speedy and uncomplicated recovery! Pit bull knees can be such a heartbreaker- my very athletic red dog has had both of hers fixed. She still has chronic issues with one of them, unfortunately.

Thanks for an update that isn't a gutwrencher...and how is your sweet Nelly doing?

Sometimes you just have to SPLURGE!!! Investment is worth the 'peace' and 'recovery'. I'm thinking 118 reasons in my 'Bayou City' and 124 'where the Mountains Begin'

So, like eggs with banana-pecan pancakes; like a bacon-cheese-burger with greesee onion rings, like ice cream sundae with peanuts and whip cream, like a $800B stimulus package for US, -- you got a double TPLO on Blue.

I know what it means to have the best 'at your elbows' to lean on in crisis. My Doc B' is in the class of your Doc S'. And don't let them stoic-doc's fool you about not liking a good face-lick. And, it is our "Pit Bull Drive" that they emulate.

Divine Ms. Lolo, -- you watch it girl and take that recovery chill SEER-EE-US! You gotta listen-up at foster home or they let loose the UBA-MAN on you. Don't worry, soon you'll have those 5 figure legs moving on the 't-mill' chasing him down.

Thank you for this story and Hector's story. This past week has been so depressing (dead, dead, and more dead pitbulls), I was getting afraid to turn on my computer. It's nice to have your faith in humanity restored once in a while!

My pup (lula!) had a double ACL repair and did ok. This poor girl and her previous owner have been on my mind all afternoon. I do wish he could know she's ok. It might be of some comfort during all of this.

From someone who's gone through the double ACL repair, just a bit of advice for the fosters: Please make sure she doesn't overly compensate with her front legs. My girl puts all of her weight on her shoulders and forelegs, as a result of the injury, and it's caused long-term atrophy in the rear, and major back/neck problems. We never got any PT recommendations, but I regret letting her get so accustomed to walking on "2 legs".

Good luck to everyone! I look forward to reading Lolo's happy ending soon!

I am so pleased this sweet girl got a second chance; something that NEVER happens in our neck of the woods (obviously).
Celebration $$ comin' your way :-)

Is there an address for Dr. Schwach so that we can send thank-you cards?

Thank you cards would be great. I'm really happy to hear good news. I saw a pit bull on last night's Underdog to Wonderdog and it made me happy that there was some good publicity this week (they made a point of showing that he had absolutely no aggression and was just overly playful and ignorant of his own strength yet very trainable) to cancel out the sadness.

I'm so glad to see this cutie pie get a little help from the vet field. As an RVT (Registered Vet Tech) I see so many pitties, and they always tug at my heart. Too bad they didn't pay attention to their knees though...plow ahead and not notice the pain. But that's part of why they usually heal so well. I hope this girl finds a good home. She's adorable!

Such a sweet looking doggie! I hope she recovers well. I too wish there were some way to let the previous owner know that she's doing ok. Poor guy! Maybe someday he'll see this blog.

Our pittie had a TPLO (only one thankfully!)on Halloween of last year. The rehab period was pretty rough, but she came out of it with flying colors. Today, you would never know that she ever had a bad knee. Keeping our fingers crossed that the other one holds out. (At least long enough for us to pay off the 1st surgery)