it feels good to laugh 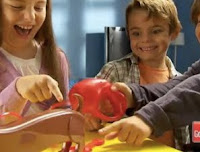 We're all loving Anderson Cooper today for putting Michael Vick on his 'RidicuList' and coming up with the perfect solution to his hope for a new doggy ... the kackel dackel.
Dog bless you, silver fox.

In other news, we wanted to report that "The Tonight Show with Jay Leno" sent a generous donation to BR for Christmas this year. Jay got into trouble when he set Chris Rock up for a really bad joke late last year, letting MV off the hook since "a pit bull ain't even a real dog." The world was as mad at Leno as they were at Rock. Rock even lost a role as Richard Pryor for pissing Pryor's widow off with that comment. 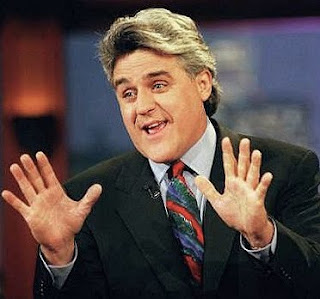 My mother-in-law Margaret phoned me last night to laugh about a new joke that aired on the Leno show last night. Apparently they put together some clips of dogs running for their lives after news anchor Brian Williams announced Vick's hope to get a new dog. (If anyone can find that clip, please share.)

It feels good to laugh. And even better that Leno's gift to BR will become our emergency vetcare fund for our dogs in 2011.
Never thought I'd say this, but "thank you Jay."

Hat tips to Samantha Laine for the kackel dackel news. LOL
Posted by Donna at 8:48 AM

Awesome... I think we all needed some news like that to restore faith in humankind... thanks for sharing.

Thank you for this update and for allowing me to follow your Blog! I'm still learning about Pitties! I volunteer at a Shelter that accepts them and I'm learning tons!
Thank you also for the work you're doing!!!

Ah, yes, it feels good to laugh. It's good medicine for the intense heartache we feel when that monster is glorified in the news. Thank you so much for sharing this.

Very funny. Shame Vick is probably too stupid to understand the irony =:o

Now that I can wipe the tears of mirth streaming down my face off, and people at work have stopped asking my if I've lost my mind. I say we all pitch in and send Vick 1 or a couple thousand Kackle Dackel's. After cleaning up all the pla-doh excrement....

Conan or was it Colbert? also did something on Vick`s desire for a dog last might.
I`m paraphrasing but it went something like this.
When Vick announced that he might be looking to get a pet dog,dogs around the World had this to say "MEOW"

I really enjoyed watching Anderson Cooper cracking himself up! He could barely keep it together. But seriously... Where does MV get his sense of entitlement? A dog should help him with his rehabilitation process. Get out! Great example for the kids. No remorse, just "gimme gimme gimme"

Nice news about Leno's gift. I felt a little sorry for Leno and Rock to be honest. The jokes were terrible but good comics are always right on that edge and bound to cross the line sometimes. I hated what they said but I wasn't convinced it represented their true sentiments.

Wow, what a great example Leno is setting. Who's next? And thanks for the laughs. I had to wait til I got home to watch it with sound. Hey Leila we have a pretty pittie by the same name in our shelter!

The closest I've come to finding the Leno joke with the dogs running included is the full episode for 12-16-10 @ Hulu (http://www.hulu.com/watch/201603/the-tonight-show-with-jay-leno-thu-dec-16-2010#s-p1-so-i0). Vick jokes start @ around 6:35 in and the Brian Williams piece starts @ 7:00 in. The clip from the monologue that's on Hulu does not include the Brian Williams piece. Maybe someone will post on YouTube soon

Thanks for the links to the tonight show, guys. I'll have to take a look.

Just wanted to say that I just got my BADRAP - EyeCandy calendar in the mail yesterday... I'm wrapping it as a joint christmas present to both my boyfriend and I for our house, but I already love it (that face on the cover!) and can't wait to look through it. Thank you so much for such a great opportunity to support your cause. All the way from down here in Florida, you remain one of my favorite charities.

Also, congrats on being featured in The Lost Dogs. I loved it and am recommending it to every animal welfarist I know. So happy for you guys!

Thank you Meagan. You made my night with your florida warmth.

oh that was great! And good to hear the news about Jay Leno - thanks.

The only pet appropriate for Vick is a pet rock.

I guess I didn't realize he's banned from having a pet until 2012? I hoped it was a permanent ban.

loved this link. shared it on my fb. so happy to hear of the generous donation from leno too

Sorry for the second post, but this just up on Foxsports by writer Alex Marvez on what Santa could give some of the NFL teams for Christmas. I liked his comment about Vick under the Philadelphia heading: http://msn.foxsports.com/nfl/story/Christmas-gifts-for-NFC-teams-Alex-Marvez-122110/?GT1=39002

thanks for the update, so glad that leno made a generous donation to you guys, yay... and yes, anderson's bit is hysterical.

vick is only banned from getting a dog until 2012, so, we need to do something. write to wayne pacelle, and sign the petition at the petition site, he was NEVER convincted of animal cruelty, just for bankroling the kennels, he got a plea bargain deal...

And more to laugh at:
http://offthebench.nbcsports.com/2010/12/30/obamas-call-about-michael-vick-gets-animated/

Taiwan's Next Media Animation created a video about Obama's call to the Eagles owner, in which the President supports the Eagles for giving SickVick a second chance.

Nothing like an animated Vick with devil's horns being chased into a prison cell by a pack of dogs to make me smile. :)