History is Made: PARTY Dec 5, Berkeley

When BR hit its big 10 year anniversary date back in April (April Fool's Day, natch), I was vaguely annoyed that we had to cancel our party plans in order to get out to Vegas to attend a much-anticipated meeting concerning bust dogs with the HSUS and other invested orgs. But that was a dumb response and only lasted until the fog lifted: "Party later. History is being made, you big dummy." Tipping point, and all that... And so the summer catapulted us into one of the most dizzying but gratifying periods ever of working in partnership with HSUS - yes, in partnership - as well as so many others to help dogs that were once considered hopeless.

This tenth year of BR's existence has been filled with more pinch-me moments: Shelters in every corner are beginning to step up for their adoptable pit bulls. BSL fighters are finally getting the respect and support they deserve (thank you Brent Toellner) and even comedians with clumsy monologues about animal abuse are getting a karmic smack down. 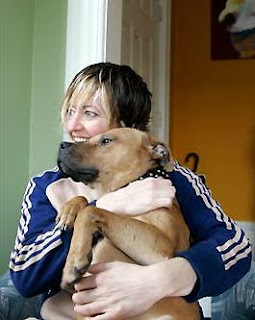 Now about that PARTY.

Ever since this pic of Hector made the news, photographers seem eager to capture a new view of the breed. We've seen hundreds of images in the media since then that reflect a perspective of compassion - Not just for bust dogs, but anywhere where pit bulls are being embraced. It's as if suddenly it's cool to care. To help celebrate this incredible shift in consciousness, we've invited photographers from around the country to allow us to display their images all in one place. You need to be there.

FOR ONE NIGHT ONLY: As part of our anniversary retrospective, we're honored to display the photos of talented photographers who showed the dogs to a waiting world. Including: Washington Post's own Carol Guzy, Associated Press photogs Eric Risberg and Jeff Chui (who captured MO bust dog images), William Widmer (who photographed the dogs for BARK Magazine), Deanne Fitzmaurice from Sports Illus fame, Tim Archibald from People Magazine, local talent Jesse Frieden (who has images of BR doing outreach and a compassion holds) and Andre Hermann.

Many of the photos will be available for sale so you can own a piece of history. And we hear tell Vick dogs are busy autographing copies of Sports Illustrated mags for you to grab up. 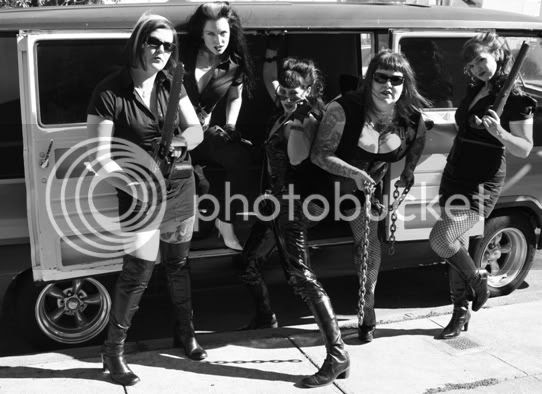 Doors open at 6pm, and it gets loud at 8:30pm when Thee Merry Widows will take the stage. This is a great opp to see Jonny Justice's new mom at work. Jennifer Long plays bass in this group, which Rockabilly Magazine describes "as trenchantly alluring a declaration of anti-socialiability as imaginable." Yes! That's our kind of music.

Congrats to Donna and Tim and all the dogs. I wouldn't have survived Barn 5 at Lamar Dixon without you.
I know you know this but please, be very careful about the shifty HSUS. Especially since they gave Vick his break and since so many of Scot's team has bolted for good reason. They have gone past unforgiveable in my book, but of course use their money and resources if it suits your needs.
The very best to you all.
Love, Carol E. McCormick

I want to come!

We aren't taking money from HSUS, but rather are celebrating the fact that so many of the obstacles to helping victims of cruelty have been removed. Miles to go before we sleep! But a party is definitely in order now that the summer's busy activities are wrapping up.

Be there or be square, Ken!

Congrats and keep up the great work! If it weren't for PB rescue groups like BR, I wouldn't have my two fur-kids. I truly believe bullies are more in tune with their owners and love deeper than any other breed, and I wouldn't trade my two for the world!

Donna, I wanted to share with your readers, a line I read from a singles profile that made me laugh. I haven't heard it before, but I miss a lot in my old age....here ya go;

Michael Vick should have been sentenced in dog years

Maybe the "My Dog is Family" first editions will be out?

At least consider hookin'-up the LCD projector or big screen for a laptop slideshow of all those great 'amature' shots.

Hey, did you all pick-up that CO is giving bonus miles for shipping us pets (100 free miles for just signing-up for the program). O.K. I'd be there as I'm an expert flier, its just that I'm afraid to go over that bridge.

CONGRATS!!! BAD RAP!!
I wish I could come! but will be there in SPIRIT, oh wait I should send a B day Card!!
a singing telegram? ...I wonder if I could fit in a packing box....it would be my luck id be one of those " Lost Frieght" boxes and die on a dock somewhere.. Ok back to the Birthday Card Idea!

Personally, I think it is very brave of you to work with HSUS. It is the only way real change happens, when every day folks speak truth to power.

I'll be there in spirit, too. I maybe able to send some friends along. I'll be in training for starting a Canine Good Citizen program at the shelter where I volunteer. Carol Guzy most generously donates her time and money to us. She has a piece on the front page of the Post website today on puppymill dogs.

Hey Donna, I was wondering if I could bring the Pit Crew or do you have to be over 21 to attend?

Bring 'me Leslie! Especially since your boy Jett will be in the show.

We'll just remind our servers that they have to card. ;-)

Much congratulations to you all! Would love to be there but we are separated by MANY miles! Have fun! Like you need to be told that.

I read today in the newspaper and I'm still pissed about it that the federal appeals court ruled that Vickhole (that's what I call him)would get the roster bonuses. It makes you wonder even more about our court systems and fuels my never ending hatred of the man.
Diane

Is the invitation extended to all kids?

Hi Anon - Kids are more than welcome! There will be dogs there for them to greet and they'll probably enjoy the photo exhibit too.

Although probably best to plan a visit before the band starts (at 8:30) if the kids are young and noise-sensitive.

Ohhh. Very annoying cannot get there. Waaaah. With you in spirit just not as satisfying. Waaah. Poor me. Not that I'm just lusting forfinger foods and sake. But boy Howdy would I love to be there. See photographs up close and personal. Oh well. Can't figure out if you've passed
Annie Oakley or Miss Kitty, but whichever we here in the SOUTH jeezelouise are flipping thankful you are doing what you are doing and keeping watch over us.

i am still working to change a prior plan to make it to this!
10 years? wow!