the power of language - compassionate words from Missouri

Rescue efforts are beginning to wrap up in the midwest. We were warmed by this news piece written with so much care and compassion. Thank you Debbie Hill and writer Cheryl Wittenauer. Happy tales for some former fighting dogs (...and again, with video)

"They are not a vicious animal. They are the victims of abuse," said Debbie Hill, vice president of operations for the Humane Society of Missouri. "That face and their eyes tell the story. They only want to be in someone's home, on a couch, or sleeping at someone's feet, maybe chew up a rug or two for entertainment. They're learning for the first time how to be a dog." 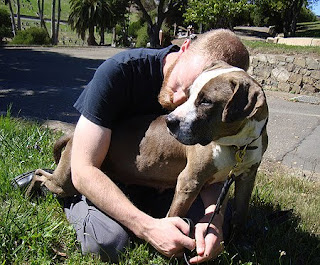 While many of the dogs are leaving for new lives, even more are being put to sleep. It's a bittersweet time for all the folks who've been caring for the dogs...our volunteers who committed to holding bust dogs during their passing, kennel workers like Karen at the Des Moines Iowa shelter who rightfully fell in love with every dog in her care, and of course the workers in the large Missouri shelter and elsewhere.

The ASPCA will be providing grief counseling for the folks in Missouri as a way to help them heal. Here at home, we've got each other and a good bottle of tequila (thanks Bob) to take some of the sting out of the job of saying good-bye. To be honest, I wish we were closer to the midwest so we could help more of the dogs that have unworkable behavior issues. It's important that none of the dogs are blamed for their fate and every last one be shown the dignity they deserve.

Rest in peace, Violet. You were loved. Photo: Sara Scott
Posted by Donna at 10:52 AM

When are the animals, the dogs, the pit bulls going to stop paying the price for what humans do.

My heart goes out to the dogs and the volunteers ...

Truly touching. I want to give a big hug gooey peanut butter kong to the brown dog with pinned back ears and begging eyes...
I cannot think of anything more compassionate than compassion holds for these dogs. I cannot wait to provide that care. So hard but so worth it.
In a time when you cannot save all of them, and no-kill is not an option, I truly admire your organization and all those who help and contribute to the cause.

I cannot wait to own an American Pit Bull Terrier...

Thank you, thank you so much for doing this.

Even if you make me cry at work.

I think its a significant step in the right direction that the ASPCA is providing grief counseling. I say of course I care about the dogs but I care more for the people who grieve whenever one doesn't make it. BTW, 4 of the parvo pittie puppies were out of the clinic and up for adoption this weekend, and two already have adoptions pending! So it does turn around.

That video was so heart wrenching and moving. I couldn't stand to see the devices the HS took in the raid, but it was so wonderful to hear Debbie Hill speak about their work. They really are doing amazing things for those poor victims.

I wish I were in a position to adopt all those sweethearts! They deserve great homes.

I will never be able to understand someone who can render such abuse. I really don't consider people who can do this human - their soul is dead and their consciousness is non-existant. Thank you Bad Rap and all of the volunteers who save many and at the very least alleviate some of the suffering.

What a mighty heart it takes to do something wonderful knowing it will break afterwards.

Thank you Debbie Hill and staff for giving these dogs a chance. It is mighty inspiring.

With love and hope from NYC,
Susan

I know what it's like to hold a dog while it's being put to sleep for behavioral issues. It's absolutely heartbreaking.

My heart goes out to all those volunteers. You are a special breed of human - to give compassion and love during the hardest of times. You are all heroes. Bless you.

Thank you to all that stepped into the breach on this. It tears at my heart and make me hope that not all is lost! Thank you!
Diane