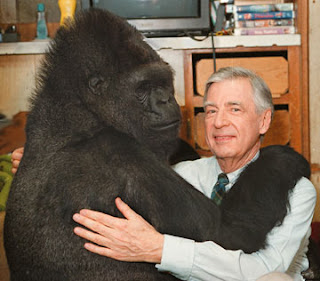 Our homeboy Mr. Rogers had the pit bull optimism thing all figured out. I'll never forget his most brilliant advice to parents after the Oklahoma City bombings in '95: A committed optimist, he told horrified parents to steer their children's focus to all the helpers who were on the scene. It was a great plug for keeping the faith during difficult times. With that generous lesson in mind, it's easier to believe in a better day for pit bulls. This week marked our 9th Pit Ed Camp and we're floating happy after spending time with some truly big hearts and great 'helpers.'

Shelters San Diego Humane Society, Longmont Humane (CO), Chicago Animal Care & Control, Chicago Anti-Cruelty Society and Hillsborough County Animal Services sent key staff to Oakland to hang out with the BAD RAP crew and study up on all things pit bull. Imagine being able to discuss dogs for days on end without seeing eyes glaze over - that's Dog Dork Heaven! Some earned extra credit by sneaking our shelter dogs into their hotel rooms for slumber parties (YES!). All hope to use lessons learned to improve shelter policies for pit bulls back home. After spending six great days with this crew, I don't doubt that some of their changes will be noteworthy. What a satisfying week - Thanks, guys! Photo: Campers below.

Awards for Camp Alum
Several alumnae have raised a high bar for other attendees. Three were recently recognized by BR's sister group Partners in Shelter Services for work they did for the breed before or after the Camp. We're proud to know them! * * AWARD NEWS * *

For those who wanted postcards of Bob's nomination for White House lap dog (see blog below). This large size file will print as a 5x7 POSTCARD. If a certain November camper doesn't adopt Bob first, we may have to let the Obamas adopt him.
Posted by Donna at 6:51 PM

Hey! I recognize Charles Craft, our rescue connection at Chicago Animal Care and Control! He's the best and I'm so glad that he'll be bringing some happy healthy BR education back to the Windy City. ;)

Charles was great, Windy. We really enjoyed spending time with him. Tamra, too. You guys have some good people in Chi-Town!

Anything that can be done to get pit bull education out into the community is amazing. I've found just walking my dog daily in my neighborhood, has diminished if not erased so many negative stereotypes.

I've said it once I'll say it again. It is always responsible dog ownership, not the dog.

Did you all happen to see this story?

Speaking of Mr Rogers,wouldn`t he have been great to do a piece on these dogs.
What a wonderful gentle soul he was.

Great postcard, Donna! I think the girls want a puppy, but once they see Bob they may change their minds!

I actually saw this article last week and thought over all it was pretty good.

My only issue was that the teacher said that her dog wasn't good with other dogs. I believe a well-socialized and well trained pit bull can do well with other dogs. But over all a good article to read.

I think Mr. Rogers would have had a blast with our little hams. Who can resist their grins and wiggle-buts.

It`s not the Teacher article from last week.
It`s a stray Pit Bull defending a woman and child against an attacker and then jumping in back seat of car to wait for Police and A/C.
That`s one smart dog.

Pit Ed this weekend was AWESOME!!!! I must have looked like some kind of a crazed lunatic, because I don't think that I stopped smiling all the way to San Jose. You and Tim are wonderful to work with, and Osa was snoring like a lumberjack all day. Who knew the "Diva" had it in her? We have already been doing out homework, not only with her but with our Lab. Might as well have 2 well behaved dogs, right? Can't wait to see what this weekend brings....

Have a great week, and we will keep doing our homework!

I love the comments on this blog post. It feels like a party with lots of different but somewhat-related conversations going on ... The best kind of party! lol

Natalie ... You've underestimated Osa. She's a doll and will do just fine. Pit bull psychics predict she'll be wearing her CGC medallion in no time.

Caveat ... I'm confident that the prez is the sort that can be swayed by good common sense: Proven adult shelter dogs are always a better bet over shelter babies.

Oops! :) That's what I get for mind warping while I type. I also read the 'rescue' article also and hope Angel found a permanent home. He certainly chose one.

Thanks Donna! Osa Mae can't wait to see you this weekend so she can give you lots of kisses. She's working hard and loving every minute of it. I think that the Pit Bull psychics are right!

1) Congrats on the successful pit ed!

2) How could anyone say "no" to Bob's face? I'm interested... what about Bob made you decide that, out of all the wonderful dogs you have, he was the one you'd reccomend for the Obamas?

3) Thanks Love for sharing the story about Angel! That's a dog who knows how to make a good impression.

4) Anyone else checked out the Available page lately? Squeeks! It should be illegal to be that cute. *fans self, faints*

1) Thank you! We're having a ball with these camps.

2) Bob: low key, suuuper affectionate with eye contact that melts, easy with dogs, handsome, appropriately submissive and very eager to please. In other words, a dog I could give to just about any home with a good brain and not worry about their future.

3) Angel - Amazing. I wonder what he looked like? (I have a feeling that's a stock photo image)

4) Squeeks: To die for adorable. Who knew they were making marshmallows in the shape of pit bulls these days?

Sounds like a great time. Education, entertainment, and pit bulls! Heaven on Earth!

Kelly Bigsby at Hillsborough in Florida rocks! She was so helpful in coordinating donations earlier this year, and she even let me use the quotation on her e-mail signature stamp: "Until one has loved an animal, a part of one's soul remains unawakened." It's from Anatole France, by the way, and judging from the write-up about what Kelly has done for the pitties at Hillsborough, says a lot about the kind of person Kelly is.

You're right Pam, Kelly is a great lady and selfless defender of dogs. Tampa pit bulls are lucky to have her in their corners.

!!! My fiance and I just got approved to adopt a pit mix from a local rescue group. She's itty-bitty at about 35lbs and our apartment manager has met, approved, and fallen in love with her. She's dog social to the max, and has already learned to respect the cat. Her paperwork came with a bunch of bully breed info - some of which is from the badrap site. She and I are both happy girls! *does zoomies around the apartment*

Congratulations on your new family member, Doc Sinister. Your life will never be the same again. And you will wonder how you lived without that wiggle and smile.

Congrats to you and your fiance.

It's always wonderful to hear about the great educational work you guys do.

I wish you could do something for the seattle/tacoma wa area. With Dan Savage and his crew at The Stranger constantly spreading misinformation & fear with their yellow journalism, the Puget Sound sure could use an education.

We will be presenting at a conference outside of Seattle in October 09. Details to come!

Please vote if you want to see a Bully grin on the box!

Congratulations to the Partners in Shelter Services Award Recipients!! Your accomplishments are very inspiring!

Reading about Pit Ed class makes me wish my girls need to go. I have talked to Linda about CGC training for Mesa so I am excited for that! Baily has her CGC and I want to get her therapy certification. I know there are a lot of BR Alums with their certifications is there any special training you recommend?

Ms. Donna - You do know how to stimulate a party.
So put on your sweater and slippers to join in with the conversation on Pit-Ed, Marshfellows, new unions, Bob of course -- you as the good host floating with the 1, 2, 3, 4 ....

By the way, who is the pretty 'big-darkblue' kn the campers photo, with his ear posture he should be on the cover of blues album.

As my OEL says, the value is seeing that 'it is all related' and that helps you focus on the positive.