Partnering to Eval the Vick dogs

We're so pleased to announce that the pit bulls from the Vick property will be getting a fair trial after all. Thanks to the outpouring of public concern about the dogs' fate, the feds gave the green light to evaluate the dogs, and BAD RAP will be partnering with the ASPCA in Virginia to get the job done. Press Release

doG bless the ASPCA, whose committment to the project clearly demonstrates this very important point: Every dog is an individual and deserves to be treated as such. 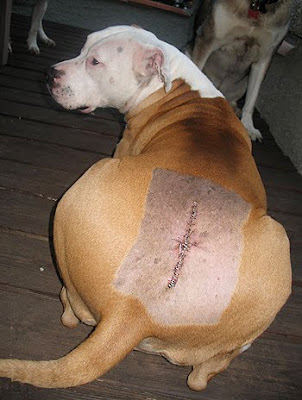 While we were busy making arrangements, Murphy's Law decided to make some mischief and tear our hearts out at home. Our personal dog, Sally - who's been living with mast cell cancer for over two and a half years - decided to have an emergency today. Scary symptoms inspired a trip to the vet and x-rays. A large and funny mass in her internal organs popped up on the lightbox and spun Tim and I into a low level panic. Internal mass = Very bad news.

Nooooo. Not today, not now, not our Sally.

We practiced ignoring our stomach knots while reviewing press releases, writing to-do lists and waiting for ultra sound results....Four hours spent ruminating on how much this girl has taught us over the years about dogs-otherwise-known-as-pit bulls, and how deeply she's entrenched us in this cause. Amazing how much influence a once-lowly shelter dog can hold over her humans' lives.

Man, it really hit home today: I love this dog, I love this breed, I can't stand knowing that 50-some pit bulls in Virginia were cheated out of the kind of worry and adoration that Sally lucked into 9 years ago.

Photo Above: Pathetic shot of our girl after mast cell removal earlier this summer.

No worries for Sally! The ultra-sound revealed gastritis, and the funny mass was just fluid from a plastic toy stuck in her busy intestinal tract, soon to make an explosive appearance via the magic of Mother Nature. In all, a $750 dollar case of a dog being a dog at the worst possible time. She'll be fine.

Onward ho: Please understand that, out of respect to this unique situation and the process of giving fair evaluations, our group will not be able to reveal any details or opinions about the Vick dogs until it makes sense for us to do so. Which roughly translated means, we aren't talking until the rest of the team, including the feds, all believe the time is right.

But you can trust that we'll give them our very best....And for that, you can blame it ALL on Sally.
Posted by Donna at 6:43 PM

Safe travel, Donna and Tim (and any other Bad Rapper), and hope you find some good 'uns! Hooray for the feds and of course, to all of you. Glad that Miss Sally survives to eat more interesting 'stuff'.

thank you for your endeavors to help these poor animals. if any good can come out of the heartlessness that is Michael Vick, it's that people may realize the horror that goes on every day for these dogs. and hopefully we will see an end to this atrocity.

That's great news!! I'm so relieved to hear the Vick dogs have a shot.

Thank you Donna, Tim, BadRap for helping evaluate these dogs. This whole sad story just makes my heart ache for the true victims, and it's a relief to know they will have some unbiased experienced help standing by them.

Re the Vick dogs, I applaud efforts to get the "adoptables" adopted, but they are all crime victims and they all must live, adoptable or otherwise. Non-lethal, safe, loving options exist for all of them, and nothing less can be the goal here.

You go! Congratulations to all of you! You have all of our support in giving these dogs a fair chance. And Sally, please don't worry us like that again!
Megan

Thanks to Sally for showing you and Tim the way, so many years ago, and for surviving to see the efforts of all of your hard work. You know I was praying for this, praying that some might make it out, to lawdogsusa or anywhere other than the needle. Now I am praying that the MEDIA doesn't totally muck this up and back to 'pitbulls are scary monsters', total bull that the public so readily eats up.

thank you and congratulations. fantastic work getting some love and care for dogs that really, really need it right now!

Thank God and doG for you guys - your commitment to this wonderful breed inspires me everyday! We wish you the best on your journey and can't wait to hear how it goes!

You guys ARE Heros!
You Inspire Us!
Thank You!

Thank you Donna and Tim for your dedication and hard work for this breed. I have been so worried about the Vick dogs and am so happy to know they will get a fair, experienced evaluation. Congratulations, you guys are incredible!
Trudy and Niko

OMG I'm SOOO happy.... for Sally, for you both Donna/Tim, for the Bad Rap team....but right now I'm beyond stoked for the Dogs that Vick had, it's so awesome to hear they (hopefully a lot of them) will have a second chance!!!

I am so pleased to here that the dogs will have a shot at survival. That some compassion for the animals might be granted. Thank God that BadRap is a part of the process, I know the the evaluation will be honest.

I am so happy that BadRap will be a part of the evaluation process, I trust their judgement

Thank you, Thank you, Thank you! I am so very grateful for Bad Rap and I was beyond thrilled to hear this news. Your work is marvelous, and on behalf of my rescue pit and all the ones who have been given a second chance...THANK YOU

And, I'm glad Sally will be fine:)
Wiggle Butts and Pittie Kisses

Bravo!! Great to see that an organization (yours)with a lot of first hand knowledge and experience will at least have some input regarding the Vick dog. Glad to know that your own dog,Sally,will be o.k. Look forward to meeting her at the Bad Rap Conference in September!

I read this story in the paper, and had to stop in and say how wonderful you are. I'm happy for second chance being given to the VICK-tims, happy for Sally, and grateful for BadRap. Everything about this post made me smile.

Thank you for everything you do. Lucy the LabraPit thanks you as well.

Thank you for having the huge hearts that you do and for loving a breed that is so often misunderstood.

I pray that Vicks dogs get the justice and the new lives that they deserve.

May the blessings of the animals be with you all.

I was so heartened to hear you will be involved in evaluating Vick's dogs. Thank you. Also hopeful that you can be involved in the DMX case here in Phoenix.

Very happy to hear that Bad Rap will be involved in evaluating the Vick dogs, and very relieved that your Sally girl is ok!

Sally is absolutely beautiful. You are so lucky to have each other. May you have many more years together. GoD bless you for your efforts of her behalf and on behalf of all bullies.

So happy to hear that Sally will be ok..I was getting all misty eyed and knots in my stomach ..been there done that!!
Donna and Tim you two are the BEST AMBASSADORS for our beloved breeds. You guys rock!!! Now go kick butt and save some of those poor souls!! HOOZAH!!!!

I'm SO happy it was only a toy that will pass naturally. She is a beautiful pit!

Your organization is fantastic and extraordinary. Pits need all the support and help they can get with the crap they endure from ignorant about the breed individuals and the media.

Thank you for partnering with the ASPCA and helping the pits from Michael Vick's property and dog fighting ring. They are the victims in this situation and deserve a chance. I'm so glad it's BAD RAP and the ASPCA involved in this. Two organizations I highly respect.

It's time to make a BIG difference!

I want to thank you from the bottom of my heart for all the wonderful work that you and your organization does for this breed. I also want to say thank how happy I am that you will be helping in the evaluation of the victims of Michael Vicks awful actions. As a pitbull owner I know the loyal and loving nature of this breed and the unfair treatment and judgement that has been formed. I have attended both protests in Virginia and will be at the courthouse December 20th when Mr. Vick returns. My heart aches for these dogs every single day. I know with your help they will get the attention and love and I pray each and every dog you evaluate has a chance. I also ask that if there are ones that have to be put down, please tell them they are loved and we are sorry for the inhumane treatment they have had to endure. I cry as I write this but I know that God has a plan. God be with you. My website link which has a wonderful poem "The Pitbull Prayer" is http://www.myspace.com/kidrockcharmer
Thank you, Sherry

OMG this dog looks identical to my dog i have, even down to the black spot on the head, i just can't get over it he has an identical sister out there :D