One of our members has been wringing her hands over a pack of loose small dogs in her neighborhood for months. They rush her pit bull and bark and cause our friend and her dog mini-heart attacks every day of the week. No fun.

You gotta love a Girl of Action, though. Angie dodged the small dogs for weeks (hard to do!), begged their owners to leash up (no dice), squirted them with water when they charged (helpful only to a point) and when nothing changed, finally came up with a solution designed to keep everybody orderly. We hope her story helps others! 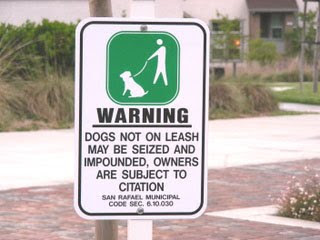 (Note: Not once did I mention any specific breed of dog in any of my complaints. I tried to keep the information very general and focused on the actions of the obnoxious dogs and even threw in a few points about how off-leash dogs impact the safety of the entire community, not just me. For example, I would say that my dog and I are being threatened by an off-leash dog in one of the city parks, rather than saying my pit bull and I are being threatened by an off-leash toy poodle.)

I filed a complaint to my Homeowner's Association against one of the worst off-leash offenders. Their response was less than helpful. So I contacted my local humane society and police department and asked them how I should handle a situation when an off-leash dog in a city park aggressively approaches me and my dog. Both agencies told me that I have the right to defend myself and my dog, “within reasonable means”, from such an attack. (I'd strongly suggest that you check with your local humane society and police department about what they consider to be “reasonable means." Surely, as tempting as it may be, drop-kicking a little off-leasher into the next zip code might be considered a little bit harsh by some people.)

The Field Services Supervisor at my local humane society offered to increase patrols for leash law violations in my park, and the local police department suggested that I call them if I’m ever feeling threatened, although off-leash dog complaints don’t rank very high on their priority list (…and who really wants to bother the police about this anyway unless it becomes really serious…).

My final attempt in resolving this was perhaps my greatest victory of all. On my travels around town with the dogs, I ran into signs that said, “Warning: Dogs not on leash may be seized and impounded. Owners subject to citation."

I contacted my local City Parks Superintendent and asked to have a few of those signs to be mounted in my neighborhood. Just ask (the right person) and you shall receive! About a month later, 5 of the most beautiful signs on the planet arrived. As the city worker was mounting them, I just had to stop and ask him for one last little favor. I asked, “Would you mind putting one of those signs up over there? (as I pointed to the row of townhouses where four members of the off-leash drop kicker contingent live). That’s where most of the leash law violators live.” He was more than happy to oblige.

Hopefully my experience and efforts will help other responsible pit bull owners out there realize that there are many things that can be done to discourage and hopefully stop the irresponsible dog owners out their from putting other dogs at risk.

Boy. We need about five thousand of those signs. And yes, I have severe sign-envy!