We brought a new foreclosure orphan into our Ambassadog program this week. He'd been tied to his empty house for a few days, hungry and waiting for his people to return and collect him.

For whatever reason, they never did, and neighbors alerted animal control. Like so many pit bulls, he's got a sensitive core and was rattled by the big changes in his life.

The shelter is a scary place to him right now - so many barking dogs and long, echoing hallways! And while his kennel run is quiet and "safe," he's already split the tip of his tail wide open by banging it on the cinder block wall whenever he gets visitors. I guess it's extra exciting that his new friends keep coming back. This one's got some healing to do, and our job is to invent ways to help him acclimate and settle in while we wait for a home. We started by giving him a strong name - Willem - and hope to help build back some of the self esteem he lost during his misadventures.

It's the American dream to own a house, and for so many, owning a house means getting a dog. Sadly, the broken dream means untold thousands of dogs are SOL. When you're newly poor and bumped out to the curb, it's incredibly difficult to find a quick rental that will take your dog -- especially, your pit bull.

From a recent Oakland Tribune article on foreclosures: Oakland has been hit hard by the country's foreclosure crisis. In East and West Oakland, nearly 10 percent of homes have been in the process of foreclosure this past year — and the city's African-American and Latino residents have been the hardest hit. On top of single-family homes that have been foreclosed, nearly 20 percent of all properties facing foreclosures are rentals, leaving many more families scrambling. 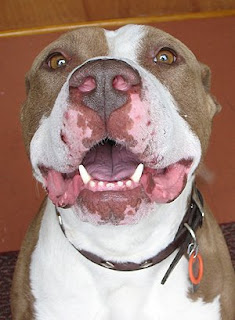 We're pretty sure Willem was treated well at one point in his life. We can tell by the way he lights up when he sees a tennis ball and by his shy request for belly rubs. I can't help but think about the people who left him behind when they loaded up their last pile of stuff and drove away ... What's it like to leave a dog like this behind when your world is crashing in? I'm torn between wanting to scream in their faces for leaving this tender heart so alone and vulnerable, and wanting to tell them how sorry I am for all of it. In the end, it's probably best not to think too much about it at all, but just pick up the pieces by helping Willem and others like him get to a better place.

In January, US News and World Report outlined the 25 cities hardest hit by the foreclosures. You can just bet their public shelters are full of Willems. Please consider sending a box of dog treats to one or more of the shelters with a request to have them distributed to their pit bulls. While you're at it, we could use some too! Send to Ambassadog Project c/o Oakland Animal Services 1101 29th Ave. Oakland CA 94601. Thank you.
Posted by Donna at 11:27 PM

oh gosh, I knew the foreclosures were bad. I didn't know the numbers were that high.

I'll be bringing treats when I visit.

I love you so much for things like this. Willem looks much like my big baby. I know just how confused and heartbroken he would be if that happened to him. I am clicking your paypal link right now to send Willem some dog treats and a squeak toy. He is a beautiful boy, and I am sure he will make you proud!

He is so handsome. My heart breaks when I read these stories. Dogs deserve better...

I look forward to reading more about this gentleman as you learn more about him.

What a sweet face. Thank you for taking him in. There are no words suitable for print for the people who think that dogs are mere items to be left behind.

When I made my choice to have my sweet boy, it was a for better or worse situation. I cut back, I sacrifice so that my little guy is happy and healthy. That is what responsible ownership is about

I hope that Willem gets his happy ever after soon.

Every time I read a story like this , I want to bring the dog home. Willem is no exception. However, I`m in Ontario , have a Bully already and would be run out of town if I brought in a second one. Laws are bad around here. I wish all good things for Willem . He looks like he will make a great best friend to some lucky family.
You are fighting the good fight.
Thankyou from Kira and me.

I'm sorry, it just makes me angry, I can't feel bad for the people. I live in the foreclosure capital of the country, Cape Coral, Florida and I was foreclosed on also. We now live in a rental with the 3 pit mixes we rescued in the past 10 years, AND two senior foster pits and one NUTTY rescue English Bull Terrier (who thank god, has a new home in SC as soon as we drive him up), SIX dogs in a rental with a great landlord. It CAN be done, but I would have lived in my pickup or in a tent also before giving up my dogs. They are my FAMILY, they will always be there for me and I will ALWAYS be there for them.

I have very little sympathy for people who leave their dogs behind. DOGS are part of your committed family.I have been part of too many rescues where the dogs where left behind and were bags of bones by the time we found them... I am currently living this nightmare and I am still battling to keep my home. I am an emotional wreck over this as trying to find housing for my family which includes 3 pits has been a degrading and disheartening uber nightmare ..most owners do not have a problem renting to people who are responsible owners its the insurance companies who dictate what breed they will insure so owners hands are tied...which means no one will rent to me..I will live in my car before I give up dogs....
I wish there was a government grant for doggie foster/orphangae programs for people who have lost thier jobs and home due to issues that were beyond their control (jobs being sent overseas) so that they can place their dogs in a safe loving atomopshere (temp shelter,) they can come visit them every day and continue being a part of thier dogs life until they can all be back together again and able to live that "American Dream again"..... thanks for saving this Willem....

This is an interview with the director of the shelter where I volunteer, from July 2008. It has only gotten worse. Please don't be too hard on the people; they come in in tears.

With a face like that, I can't imagine that anyone could pass him up!

What can we do to help you? Where are you located at?

I bet he was owned by a family, where the kids treated the dog well, but the parents had a different view about animals. So when it was time to move, Mom and Dad said "tie him up" and the kids didn't have a say in the matter. I saw a lot of this when I lived in Camden. It's really heartbreaking.

Ugh!! What a heartbreaking story but it todays economy its not an uncommon story. What a lover he is and a beautiful dog. As a loyal pitbull owner, I could NEVER, EVER leave my sweet girl behind. If I had to leave my home I would make sure she would come with me. Willem is on to bigger and better things now. I am sure he will find another loving home soon. He is too sweet!

He looks like such a nice sweet dog. It is unfortunate that these things have to happen to these poor animals.

my dogs are my heart and soul and to leave one behind would be like leaving my heart and soul behind, literally. i too would live in a tent or car or with family or a hotel, before giving up on my babies. i have to go out of town for a few days for training for a job (dog grooming) soon and though i am excited about the job and my dogs will be at home with my husband, that will be hard enough for those few days. it is heartbreaking to know that someone could just leave him behind. i know it happens though, way too often. thank goodness willem is safe and i am certain he will find his furever home, with humans who will never let him down again.

It's hard to have sympathy for people who abandon dogs in locked foreclosed homes, or tied and left behind like this one.

It makes you think these people are in dire straits because they are thoughtless and selfish. They probably went into their mortgage without calculating the risks and commitment, too.

I am reading story after story from animal control officers & real estate agents finding dogs left to die, with bits of carpet and drywall in their mouths from eating anything they could find...claw marks and bite marks at closed doors and window sills. One family dumped a couch at a junk yard - with their pit bull tied to it. The dog was there for days before someone fortunately saw and rescued her.

No matter the emergency, shouldn't they be prosecuted for inhumane acts like leaving animals to die slowly in excruciating pain?

I agree with GigWriter. People should be prosecuted for leaving behind animals - it's cruelty. At least take him to a shelter or something, how could someone be so heartless?

Regardless of what situation I might be in, I would never pack up my stuff and leave my animals behind. When you choose to be a pet parent, you have a responsibility. LIke another poster wrote, I would live in my car before moving in somewhere that wouldn't take my dog. There are always solutions. Problem is most people are too lazy or overwhelmed to deal with it.
These stories just break my heart and I want to take them in. My own pit came to me as the result of losing her family in the economic downturn. I can't imagine giving her up. It's just not an option. Yet I see these all the time. As a volunteer a shelter, I see far too many beautiful older dogs that come in as "strays" that are never claimed.

i agree its terribly inhumane to just leave him behind, prosecution should pursue. at least in a shelter he would have a chance. though slim it would at least be a chance. and he wouldnt be starving in the harsh weather that could come.