Nearly five months after leaving their freezing hell hole, the Kay County Oklahoma bust dogs are starting to find their way to permanent homes. It's such a good feeling, I can't even tellya. 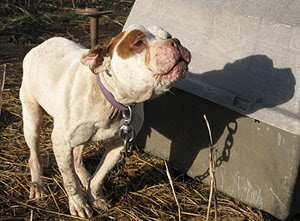 This runny-eyed old guy broke our hearts into a thousand pieces when we first spotted him weighed down under his heavy chain. Reps from MABBR (Mid-America Bully Breed Rescue) scooped him right up and took him home. Brandi Smith told us "I don't think his tail has stopped wagging since he went into a home." Even better, his people haven't stopped wagging since he showed up. They just asked to be his forever people.

The skateboard vibe of his new home must have rubbed off, because the dog we all thought was old has dropped a number of years since his recovery and is now thought to be middle aged. That's the power of love. Congrats to his family and huge thank yous to MABBR for taking this special dog along with so many others and giving them a life.
...And look how HAPPY this little stinker looks! 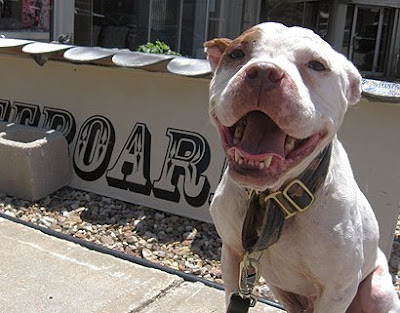 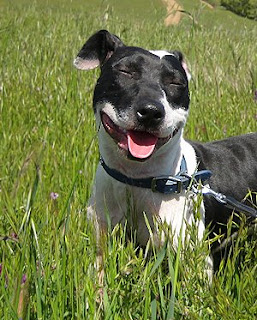 More Happy: Our funny duck pup Emmett has two people that can't wait to bring him home. He was found on this same yard, weak from hunger and crammed into a too-tiny crate with his starving siblings. Due to the horror of his beginnings, his recovery has been slooow but steady.

The people as well as the adult dogs in his foster homes helped remind Emmett that life is good. Now he gets his own doting humans for keeps along with a female pit bull who wants to show him how her world works. Well done, pony boy. Your kind of good fortune is worth a ticker tape parade.

Here's a little video of the pup back in December, finally being reunited with his mama after a long road trip home. Kudos again to Best Friends for helping our dogs get to California.

So what about Okie girl Nelly?

Some have noticed that she's got an 'Adopted' notice tagged onto her website bio. We pulled her out of the adoption pool when her health issues starting adding up.  Turns out that our dragon girl has babesia on top of everything else. Babesia is a blood parasite that causes anemia and as it cycles, it causes her to have low periods. It's treatable but not necessarily curable. Combined with her breathing difficulty, funky little chicken legs and digestion problems, we did not feel comfortable offering her as an adoptable dog, especially if her time may be short.. 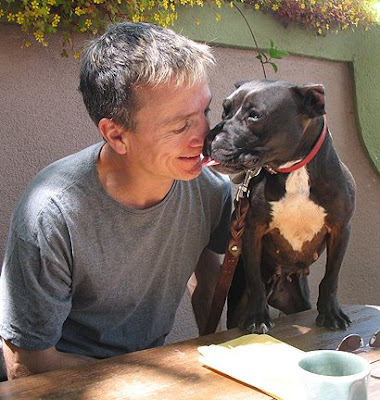 On the same hand, this girl's constitution is stronger than most of us put together! So we decided that, as long as she's wagging happy and acting herself, she'll stay with us and enjoy a life of luxury.

Heads up: We are open to finding the wonderful Miss Nelly a hospice situation that can give her more one-on-one than we can provide - provided that home stay realistic about her quality of life. So in a nutshell, she's reminding us all to live one day at a time, and to enjoy every minute while we're in it with her. Thank you, little girl.

If you haven't seen the recent E60 show on the Vick dogs, it's online now. Dare you to watch it without tearing up when Nicole Rattay offers her two cents. E60 ONLINE 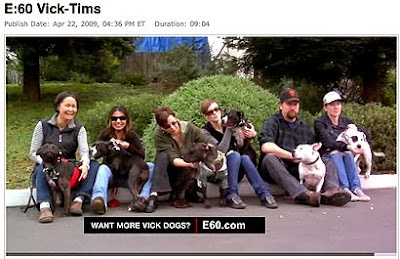 E:60 great reflection on thriving. Still wondering, why the need for PETA,fight scenes, or even Vick picks? The pitbulls ARE the story.

The strength of these pups remains in their capacity to absorb the compassion around them.

Like all Tim's 'kids', time to get back to work to make more 'friendly' people happy.

Wow Donna & Tim. That was an awesome video. I am so proud of Bad Rap. Len & I are so grateful every morning when we wake up & Newman is there. He has brought so much to our lives. You guy are the best of the best.
Take care,
Dona, Len & Newman Fong

Oh, LITTLE BROWN-EYED DOG. I don't know your name and maybe I missed it. But you are the most happy moment I know about since - well - since my Mom decided it was time for her to go.
I remember when all you guys were freezing and starving in Oklahoma at Christmas time. And the big guys couldn't/wouldn't help you. So the little guys - well, not little in my book but you know what I mean - at BAD RAP and BEST FRIENDS and MABBR and the vet whose name I don't remember came out there and helped you and your brothers and sisters. You have made me smile and cry and smile again. And I am saying thank you to all the stars in heaven - which were shining down on you guys those cold December nights. Please tell Donna that - we - love her.

I thought that perhaps Nelly's new family might like to know that there are some really great online support groups for both Immune Mediated Hemolytic Anemia, IMHA, (which can be secondary to to babesia, as you mentioned) as well as a Tick-L (you have to join to view I believe) support group. My pitty bull mix Tiggs has IMHA, not as a result of babesia, but the anemia presents itself much in the same way. We have a few dogs in our support group with Erlichia and Babesia that have developed IMHA.

Also, Denzel, one of the Vick pitties at Best Friends has Babesia, and 13 of the others there are babesia positive. Poor guys have had enough!

Here are some helpful links for support with tick borne, blood parasites, and immune mediated anemia:

Our best to Nelly and all the Okie pups!

Once again your blog has me sitting at my computer crying. I am so in awe of the work you do and, more to the point (of this post anyway), your compassion to the Nellies and Frodos and Emmits of the world. I have become quite smitten with Nellie and emailed Tim the other day once I saw the status change on her listing. Thanks for the update, thanks for the great photos and thanks for all you do to make their lives matter.

Great news about the OK dogs. The HSUS has named the Dogs of Valor of the year, and a little brown pit bull from Oklahoma was included. (That's who I voted for)

As for the E60 clip, I lost it at "lucky to be alive." The shelter where I volunteer had 11 of the dogs, including Sweet Jasmine, who became a staff favorite. Staff and volunteers alike still go over the stories of the Vick dogs. I gave the director of animal welfare my copy of the SI with Jasmine on the cover, and that was when she told me she would carry Jasmine outside because she was too frightened to go on a leash.

Thanks for all your good work.

yay,Okie dogs... they have really blossomed into the dogs they were always meant to be! Woo!

And Nicole did get the tears flowing here. I agree w/ Boris about Peta and fight footage, but that's a personal bias-- I think it was a pretty good story on the whole; well-rounded and fairly grounded. The offending footage served to demonstrate what the dogs were up against pre-rescue: attitudes like Peta's, and the dog fighting ring.

Awww... this is my first visit to the site. You guys do an amazing job... I can't believe how misunderstood bigger dog breeds are. I agree with you that it's owners, not dogs that make or break a dog.
Thank you for sharing your great work! x

Michael Vick is being released today. He has been talking with Wayne Pacelle on doing work with kids to stop dog fighting.

There is a nice clip on CNN.com titled "Vick dogs recovering" and "Vick dogs thrive in new homes." Maybe they will finally be recognized as Victims and not "menacing dogs." Lots of cute wiggly pits in a clip almost 3 minutes long.