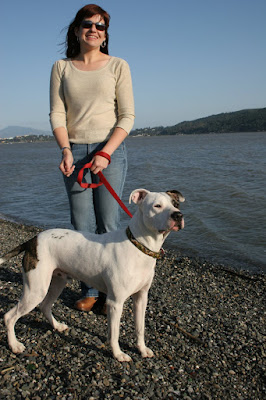 Sasha and Andy wanted to be a BAD RAP foster home for a dog. Any dog. I remember how they spied Audie as I considered his future as a performance dog for myself. I never asked, but suspect they may have adopted him had I not done that myself. But, they wanted to help any BAD RAP dog reach his or her best to find a new home. We asked them to foster Ernie. Ernie survived Michael Vick and remained a happy and thoughtful dog, but Ernie had an annoying habit. He whined. Constantly. The pitch was not far from the decibles required to break glass. Ernie had also never lived with cats. Sasha and Andy have two.

Fast forward a few months and a lot of training. Ernie has new confidence, his whining has all but disappeared. And Ernie has two new friends, Henry and Quincy, the resident cats. Sasha and Andy introduced their cats to Ernie slowly and we smiled with each photo update. First was a photo of Ernie sitting politely 10 feet from Henry, then Ernie sitting politely 5 feet from Henry, and one day, Ernie lounging on floor with Henry. He soon won over Quincy too. Ernie’s whine was nearly gone, his obedience stellar, and others started commenting that they wanted their dog to walk on leash just like Ernie, so we decided it was time to help Ernie find his new home. We discovered though, he already had. Just the other day, Sasha and Andy requested the opportunity to be his adopters. How lucky can a dog get. Ernie survived Michael Vick, he survived a long, lonely shelter existence, and he landed a home with a warm, smart couple, two cat pals and his best dog partner, Hana. We’ll be signing final adoption papers soon. Now that’s a happy ending. 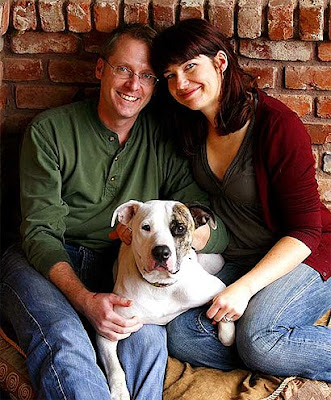 I am so happy to hear about Ernie's forever home.
My girl Muffin attended class with Ernie and I was in awe of his obedience and behavior.
When you saw Sasha and Ernie, you saw an awesome team. Congratulations!

That IS happy. Yaaaay Ernie + family! :)

Congrats on finding your forever home Ernie! And Congrats to Sasha and Andy in finding a wonderful dog who just needed a little TLC. Keep up the great work!

Oh, ERNIE. This is the very best news. I am so happy for you. All the guys out here say hello.

i am crying tears of joy. but also to think such an amazing dog was in such horrendous hands of such a horrendous man breaks my heart. thank goodness he is safe and happy now. ernie caught my eye from day one, as i followed the vick case. what a guy ernie is! yay for happy endings and good people like his new humans.

oops that was me that just posted that last comment about my tears of joy and ernie catching my eye from day one. i was excited about ernie's success, that i pressed send before i could get my name in there

Bless all of you sounds like a fabulous pack! Gigantic kudos to Ernie for overcoming the ugliest of beginnings!

Welcome home, Ernie! (Though I bet you already knew it was home...)

I just got a closer look at this dog. He looks like Petey from the Little Rascals. He just has that look I can not explain. He should be a star. Happy he is home, more important.

Yea Ernie!
My dog Max is the exact mirror image of Ernie so he has had a special spot in my heart. I have been reading about his progress all these months and I am so glad for this happy ending!