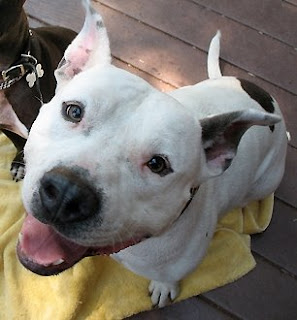 I have the pleasure of seeing and working with Ted in my weekly Canine Good Citizen (CGC) class. He’s in his new home now, adoption pending, with his person Cindy. Ted just missed passing his CGC test last month because he’s afraid of trains and loud noises. As luck would have it, this test site was a stones throw from Amtrak and freight train tracks. In the middle of his CGC test, a train roared by and Ted, completely distracted, couldn’t recover fast enough to get back to work. Cindy was understandably disappointed. 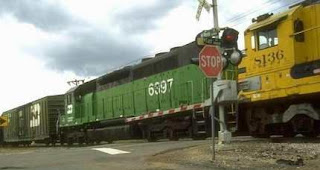 In the weeks since though, Cindy has started to wait in happy anticipation for the train. As soon as that train blasts its obnoxious horn, Cindy whips out a favorite tug toy and Ted gets to play "watch me” and tug games. Just the other day as the train screamed by, Cindy and Ted tugged together.
Ted had forgetten all about that train while he happily focused on Cindy and his games.

I felt a big smile spread across my face. You’ve come a long way (Ted) Baby!
Posted by Linda at 8:19 PM

He's a doll baby!
I would love to hug that big head.

Yay Teddles! U knew you could do it. Katie Lynn (his CGC classmate) says "Way to go, sexy beast."

That's better than awesome. I know how it is when a dog accomplishes something that was once so difficult! It brings a very certain sort of joy. Way to go Cindy and YAY TED BABY!

Go Ted!! I have a pit mix myself who is the most well behaved dog, but is still incredibly afraid of thunder. She crawls up in my lap like a baby every time!

Neat story. I LOVE hearing about the recuperation of the Vick dogs.

Hey Teddles
Way to go
A little whine with that wine?
http://www.sfgate.com/cgi-bin/blogs/sfgate/detail?blogid=26&entry_id=32086