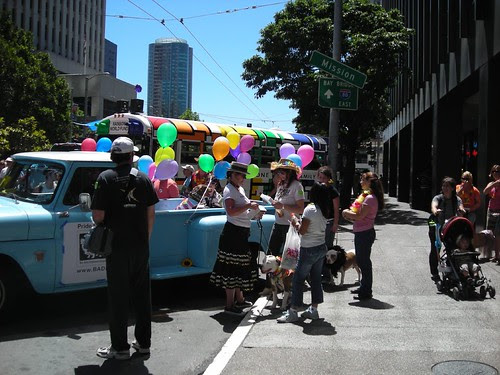 This past Saturday, a motivated group of Bad Rap volunteers lined up with the dogs in silly costumes and marched in San Francisco's annual Gay Pride parade.

The crowd was awesome this year, with lots of people cheering loudly for us and petting the dogs. We handed out 1000 informational postcards to folks asking for them, we got to take a nice walk with the dogs, and word has it we made television coverage this year. Yay! 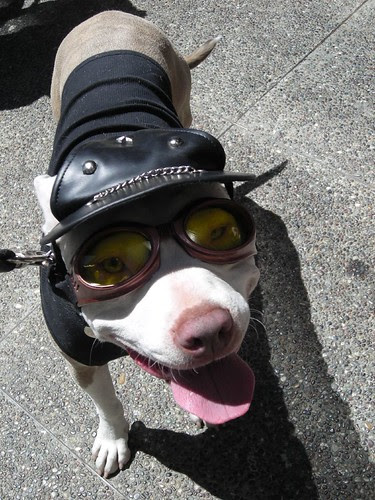 My own personal highlight was a flamboyant television host of an undetermined station stopping me in the middle of the parade and asking me if Gunther would sniff his butt.

Of course, who could blame him? Gunther was indeed looking mighty fine in his leatherdaddy duds (and didn't even mind the Doggles squishing his eye too much)...

This parade is such a great opportunity to get out there in the sun, have some fun with the dogs, and show our support for a community that's all-too-familiar with having to face social stigmas, misunderstandings, unfair legislation and - unfortunately - hatred, fear and bigotry.

It's a time to march and hope for a more tolerant world - one not so prone to knee-jerk judgements based on prejudice and anger - and the dogs are more than happy to participate.

So down Market Street we marched, with about 15 dogs and 20 people, one vintage pickup truck, 20 balloons and 1000 postcards.

This year was a particularly lovely and not-too-hot day, and the highlight of the parade was actually the after-party that happened on the patio of a local bar after the Giants game got out, at which point there was an influx of fans who suddenly got to hang out with real live pit bulls.

Foster dog Peter was the star of this encore show, and charmed the heck out of a local family with three kids who couldn't pull themselves away from him.

All in all, everyone had a lot of fun, and the dogs did their work but just being out in public and letting a lot of people see real live pit bulls in real live situations (and silly costumes).

Thanks to all the volunteers that worked so hard to pull this off yet again!