Don't judge a Booker by his colors

Though we don't generally like to draw attention to the color of our dogs, what with the consumerism that surrounds the breed leading folks to focus far too heavily on coat color as a selling or buying point (no reputable breeder uses coat color as a marketing tactic), we have had the interesting fortune to have two chocolate tricolors in the program in the past year.

Tricolor means: three colors. Pit bulls also come in "tanpoint," which means the dog has the tan eyebrows, etc but doesn't have white splashes as the third color. Tanpoint/tricolor is a coat pattern, and pit bulls come in black, chocolate and red tri, and all the dilutions therein (blue, etc).

I'd never seen a tricolor pit bull in person before this year. In addition to the two in our program, I also met a nice older black tri gentleman at the East Bay SPCA, and another chocolate tri at one of our shots fairs.

In any case, what's interesting about the tricolor pattern (over and above the genetics that cause it), and the reason this post is being written, is the reactions from folks in and out of the breed. 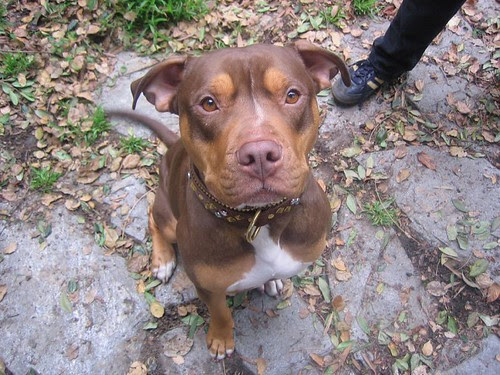 Booker, for example, is routinely mistaken for a Rottweiler mix. In fact, a trainer at a local shelter mentioned that he was a Rottie mix in front of his owner, who in turn explained that he's purebred.

This trainer snorted at that, turned away and rolled her eyes at this suggestion, letting everyone in earshot know that he was clearly a Rottweiler mix, but that she was vaguely humoring his new naive owner.

This breed mis-ID happens routinely on walks, with strangers voicing their opinions as to his heritage. Never mind that Booker is much smaller than a Rott and not remotely shaped like one, or that he doesn't have any behaviors consistent with a Rottweiler - everybody else knows best.

Sidenote: Booker actually came to us via an e-mail that was entitled "Red Rottie?" from a very confused shelter staff trying to figure out what the heck their favorite dog was. Fortunately for Booker, we confirmed that he is in fact a purebred pit bull, and we had space to take him. 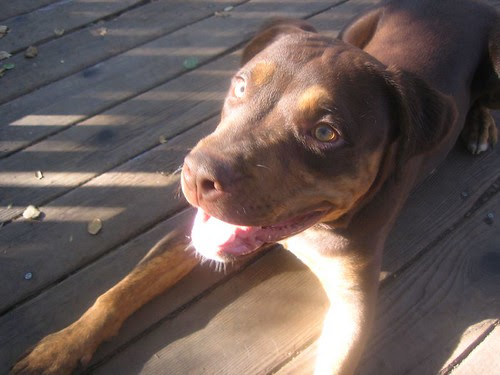 The second dog to show up was Gus, who with a bodyfull o' puppyfat and incorrect houndy ears, gets mistaken for a Lab/Rott mix quite often. We all think Gus is quite handsome, and he's a big hit in public, but nobody outside the breed seems to think he's a pit bull.

Here's the rub: because Joe Q. Public doesn't think Gus is a pit bull, he seems to carry zero of the stigma normally associated with walking our pets down the avenue. Mothers don't shepherd their children out of the way (which is nice for Gus, who adores them), there are no snide comments about the breed, and people are inexorably drawn to him because he's so handsome. In short, Gus is a serious babe magnet.

Gus' public popularity would be great for him, were Joe Q. Public looking to adopt him. Unfortunately (and here's the rub I mentioned), the look that makes the average pedestrian stop and pet him is also preventing pit-loving potential homes from applying for him.

I most recently was asked to provide "proof" to a potential home that Gus could be purebred. While, again, I ask that folks be much more concerned about temperament than beauty, I nonetheless decided to be a good sport and forwarded on a lengthy article about tricolor genetics, sure to entertain anyone who actually finds discussions of coat patterns and genes to be interesting. (That may or may not be you, so don't feel pressure to read the article.)

Unfortunately, the article was not enough to convince the potential home that Gus might be purebred, and the adoption was not pursued. Ironically, this home was much more interested in Gulliver, who had in fact just decided to grow into a probable pit mix right before our very eyes. (We think some American Bulldog may have snuck its way in, and Gulliver's new owner is doing research on AB's just in case. Gulliver's new dad, however, couldn't care less what his new buddy is or is not mixed with, and is just ecstatic to have his new best friend home.)

The biggest indicator that Gus is a pit bull, of course, is that Gus acts like a pit bull. In fact, Gus is a sublime example of the breed - he has a rock solid pit bull temperament, and will require an owner who isn't a pushover. He's a rough and tumble play buddy who nonetheless is ruled mercilessly by a terrorist Chihuahua bitch in his foster home. If Gus were human, he'd be captain of the football team and the Prom King.

Now, here's the thing: it really shouldn't matter what color the dog is, or what may or may not be mixed in at some point in his/her lines, as long as the dog's behavior and temperament is consistent with the breed label applied to that dog.

So: does Gus have another breed down the lines somewhere? At the end of the day, nobody knows. We know he came from a pit bull breeder, and we know that pit bulls come in chocolate tricolor, and we know a little about coat pattern/color genetics. Most importantly, though, we know what his temperament and behaviors are - and those are aaaallllllll pit bull. So, if a Lab did in fact sneak its way into great-grandma's dog house, do we really care?

Unfortunately for Gus, as evidenced by his experience thus far it would seem that he is being judged by his colors. Ah well - I'm sure his people will show up. In the meantime, he'll just have to settle for being fawned over at public appearances by folks who may or may not even like his breed. But Gus can handle it - and maybe change a few minds here and there.

I'm really glad this was posted because a while ago there was a 'mystery dog' at the shelter that I just couldn't figure out. Now I know he WAS a tri-colored Pittie. He was a gorgeous little tank!

And on a similar note of people loving Gus because he doesn't look like a Pit, my mom is the same way. She sees the 'stereotypical' Pits and voices her disgust, but if she sees a 'Pit that doesn't look like a Pit' (maybe it's tan and white with a little pink nose with big floppy bat ears) she thinks its a pretty cute little dog. People are so weird sometimes =)

I have been looking for articles on the internet for a long time that talk about the various colors Pits come in and the genetics behind them. Now there is one that I can point people to. I also love the article that is linked on this post.

I actually own a tri-colored pit. She is always mistaken for being part Doberman Pincher despite her size and mannerisms, but she is in fact a purebred APBT. I'm glad that there are more people posting about these pits in disguise :)

thats a nice looking pit..to bad people think they know how a dog supposed to look.

Hey! I found this article, b/c I have a full blooded APBT that here recently I get a lot of comments on her being a rott-mix....which she isn't! She is just has the same beautiful markings as your dog. My dog Big Girl looks soooo much like your dog, it's uncanny! Please email me so I can send you pictures of her, so you can do your own comparison. Thanks, Ally.
allyson_shealey@hotmail.com
or
myspace.com/allyshealey

I'm fostering a chocolate tri color pit pup (male) for a local organization here in Eugene, Oregon. He has green eyes that are very beautiful, other than that he looks A LOT like Gus! same face shape, and ear shape! I can send pics to whomever would like them wtbsmom@msn.com

I'm glad you posted this...it's actually the only picture I could find on line of the Tanpoint or Caramel Tri Colors...or as we like to call them "Reese's Cups."

omg!!1 this dog is tooo cute!!1 i kno tht these dogs have bad reps. but they are my choice breed hands down, well, behind the doberman pinscher....of course lol :0)

I'm the proud parent of a tri color pit myself who is often mistaken as a rottie or doberman mix. Most of the people i come in contact will refuse or deny the fact that she is a pure bred due to her coloring. Even shelter staff. But life goes on. As long as she's around I could care less what breed other's think she is.

I have a female "pitweiller" like these! The same colors and the same red nose! I'm impressed as they are identical! Nice dog!! greetings from Brazil!

I heard that you can tell if it's a purebred pitbull, if there teeth are curved back at birth. If any of you know if this is true please leave a comment or reply.

I have two tricolor pitbull puppies. I will upload some pictures later.

I adopted a supposed lab/pitt mix that looks exactly like Gus. Is it possible he's a full pit and not a mix? Even the vet said he was a def mix, but Im not so sure now.