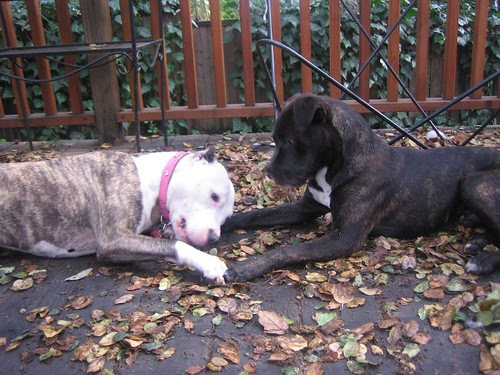 It was a cloudy Saturday morning.

The perky girl had spent the morning flirting with all her Pit Ed pals, and was relaxing with her human buddy Steve.

In trotted the dark handsome young man, fresh from a crack performance in CGC class.

Their eyes met... their tails wagged...

It was love at first sight.

Though Chester is at least 6 months younger than the worldly Chickie Sue, we felt it wasn't our place to judge.

And so, a chance meeting turned into the ever-important First Playdate.

These two spent the entire afternoon wrestling, chasing, tugging, pulling, running, resting and doing it all over again. The series was captured by the requisite chaperone, who was exhausted just from watching all the rambunction.

Both dogs ended the day with baths - after all, there's nothing that kills a good First Playdate faster than some after-play funk. It may have dampened their fur, but it didn't dampen their spirits.
Posted by leslie at 9:33 PM

Someone NEEDS to adopt this lovely girl! Just looking at her playdate pictures made me smile...Go Chicky - you boy killer you ;)

Stan, Lily and I are thrilled to see that Chickie Sue has a 'special' friend. Of course, Stan would love to fly out there himself and wrestle with her, but Lily will not allow it.

It's so cute to see two dogs who just met each other get along so well. The pictures are a nice touch and it's nice to see what they did in succession. True Bully fun!