Huzzah! a Jonny Justice stuffie for every child! 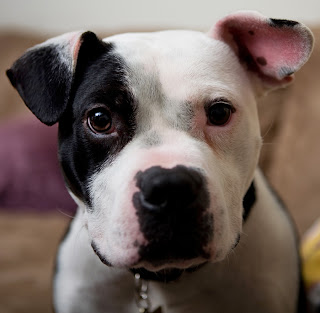 No matter how smelly, fugly, or freakishly toy-like they may be -- all dogs are adorable if you ask us.

That said, San Francisco's Jonny Justice, a Staffordshire Bull Terrier who was rescued from Michael Vick's illegal dog-fighting ring, proved that he is in fact the prettiest, coolest, and generally most likeable pup of them all. He was crowned the winner of the GUND's Top Dog contest after thousands of votes were counted.

(Note from us: There's no way to know if Jonny's a Staffordshire Bull Terrier. Although he's certainly built like one, he's your run of the mill 'pit bull' to his friends and fans.)

To honor this pick of the litter, GUND will be replicating Jonny as the next plush pooch, which means you can have your own Jonny to hug.

GUND, a manufacturer known for its stuffed animals, hosted a Top Dog photo contest on Facebook for one month this summer, hoping it would help the company find inspiration for a new plush puppy.

Jonny was no shoe-in -- he had some pretty stiff competition. More than 1,305 owners submitted photos of their pooches and more than 50,000 people cast their vote for the top dog, which included four categories: Most Beautiful Dog (Jonny won!); a Face Only a Mother Could Love (where was Mugly for that one?); Doganista; and Dog that MostResembles its Owner.
The toy company held a simultaneous competition on Pinterest, where pinners were asked to tag photos with @GUNDMostPinterestingDog and submit the pins to GUND. Finnegan, an Australian Shepherd, ousted Jonny in this contest, but that didn't stop Jonny from outscoring him in other categories.
Aside from showcasing a slew of darling doggies, GUND's contests told emotional stories and showed how "canine companions mean so much ... to so many different people," Bruce Raiffe, the company's president said in a statement.
This alpha dog's plush toy will be available in stores in 2013. Arrf.
Posted by Donna at 9:48 PM

Stoked that I'll get to have my own Jonny Justice! Oh, and I suppose it's awfully good for the pit bull reputation to have a bust dog turned into an adorable toy...


Lots of licks,
Swisher and Oakley

Awesome!!!! What a wonderful, positivie message to come out of that whole Vick mess. Take that Michael Vick!!!!

That is wonderful news. He's adorable and it definitely sends a positive message to people about these misunderstood dogs. The saving of the Michael Vick dogs is truly historical and a reminder that once in awhile goodness wins over evil and that these dogs were worth saving, are all individuals, unique, special as are all dogs and they all deserve a chance to have a good life. Dogs enrich so many people's lives in so many ways. I am so happy for Johnny and his family and for this positive outcome.

So glad that everything worked out...!

That is fantastic news. Jonny is definitely a star! Go Jonny Go!

Personally, at the risk of sounding biased, I think my Buddy would have made a great plush Gund, too. ;-) RIP Buddy Boo; your petMommy misses you.

Really great blog keep it up.