Let's do the time warp: The funeral of 'Spot' 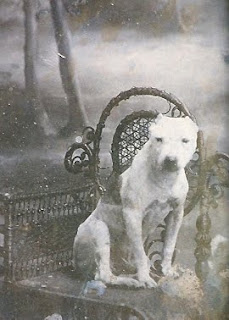 You find the darndest things on ebay. This turn of the century news clipping describes the elaborate funeral of a celebrated senior dog who was apparently loved for his fighting ability as well as his popular friendship around town.
In case you're wondering, we aren't posting this to glorify anything. Consider it an interesting bit of cultural history (lots of references to a well-knit Irish community here) and a peek into the minds of men who saw the world very differently.
The ebay seller described it best: "reflective of the social mores of its time - an era not far past human slavery, a time when women still didn't have the right to vote! Memorial to a beautiful old dog, who although clearly loved, was subjected to a life we view today as morally reprehensible. A reminder of how times have thankfully changed. Here's to you old Spot, and all the dogs WE fight for today." Indeed.
This is how it reads:

BURIED AT NIGHT, A HERO

Victor in Many Battles Rests in McKenzie's Cemetery.

They buried him last night - old Spot, hero of half a hundred fights. They laid him deep at dead of night, and gave him a wake and a sermon.

A keg of beer was tapped in the basement of Dan Ronan's, 3125 Emerald avenue, for he belonged to Ronan, though all the neighborhood called him friend. There was plenty of tobacco and dozens of clay pipes, and the number of sandwiches couldn't be counted.

The mourners came early to pay their respects to the dead champion. They brought flowers and laid them down on the home made coffin. They sang songs to show their sorrow and buried their grief in dancing the griz.

Crepe on the Door.

There was a crepe on the door, and honorary pallbearers, and mourners everywhere carrying lighted candles. And there will be a headstone with theis simple inscription engraved upon it: "He's gone! Doggone!"

Altogether, Spot would have loved his own funeral if he had been alive!

Old Henry Lawlor - great friend of Spot preached the sermon, insisting that it was a dogmatic sermon. He praised the virtues of the deceased, who had been faithful to his master for fifteen years, and who had won more friends than any human in the neighborhood.

Then the funeral cortege got under way, the grave was dug in McKenzie's cemetery, a vacant lot, the tapers were lit, the last words were said: "Poor old Spot, the cats will miss you much!" - the grave was filled in, and the mourners returned to the keg and the sandwiches.

The keg was dry and sandwiches gone, so the funeral party went to the saloon of John P. Walsh, state representative and friend of the dead fighter, and drowned their woe again.

Spot was 15 years old, a bull terrier. In his prime, not a dog could whip him. Ronan matched him against the best in his class and he won time after time. Lately, however, he had taken life easy and accumulated many bones which he buried in the yard.
__________
If anyone has good detective skills, help us uncover the identity of the state representative called out in this news clipping: John P. Walsh. We'd love to date Spot's funeral. Thanks.

EDIT From cyberfriend Peggy, "Couldn't resist the challenge to locate Spot; Based on my googling, I believe he lived in Chicago's Third Ward. John P. Walsh was a state rep from that ward from 1904-1918 and listed his address as 738 W. 31st Street -- which is just around the corner from 3125 Emerald Avenue, Dan Ronan's place (now Freddie's Pizza & Pasta Parlor)" -- Nice. Thanks Peggy.
Posted by Donna at 11:23 AM

Interesting indeed.
I don`t know what else to say about this...
I `m glad it`s in your hands.

This piece is another reminder (not that we need one) that dog fighting is not a "cultural thing." Although it's clear that the way dogs are regarded by those who fight them today has certainly changed for the worse.

Couldn't resist the challenge to locate Spot; Based on my googling, I believe he lived in Chicago's Third Ward. John P. Walsh was a state rep from that ward from 1904-1918 and listed his address as 738 W. 31st Street -- which is just around the corner from 3125 Emerald Avenue, Dan Ronan's place (now Freddie's Pizza & Pasta Parlor)

I hope our friends in Chicago can offer a toast of Potheen in memory of Spot the next time they're in the neighborhood. His little bones can't be too far from this spot.

Very well said Donna.I was thinking what you so eloquently expressed.I just didn`t know how to express it.

Yes, indeed, the darndest things CAN be found on eBay. Once amid a search for pit bull merch, I came across a listing for "so-and-so's Keep. Only the best dogmen use this keep."

I read Colby's book a while back and was continually stunned by the way that ye dogmen of olde seemed to regard their dogs as "family" and treated them very well... oh, except for that whole pit fighting thing. So weird. And you're so right, Donna. There has been a definite shift in the way fighters treat their dogs, especially the ones who lose. Instead of throwing them a wake, they throw them in a swimming pool. That said, it's still so hard to reconcile how historical dogmen were convinced they loved their dogs as cherished companions while simultaneously subjecting them to constant pain and stress. All in the name of "But that's what they love to do. He wouldn't fight if he didn't love it."

So interesting...I am Chicago and will do so!

I did a search for John P. Walsh as state representative. I found one in Pennsylvania, Indiana and Illinois for the first half of the 20th Century. There was also one for the Dakota Territory but the article said state representative so I dropped him.

I correlated that with Irish communities and came up with Illinois but did not take it any further.

I'm reading Kathy Strouse's book and she makes it clear that there are currently different ethics by which fighting dogs are kept.

And I think Peggy nailed it! That part of Chicago is Southside Irish, I believe.

Reminds me of all the stories you hear about dogs being loyal post-mortum to their people (Greyfriar's Bobby, Hachiko)...it's nice to see the sentiment reversed once in awhile!

Wow! Peggy that is AMAZING! My search put me on the wrong path as I started by focusing on the rare spelling of 'potheen'. If you don't mind, what google query did you use to get to John P. Walsh? (always looking to improve my googling skills :) )