schooling a former stud muffin - it takes a village (of dogs)! 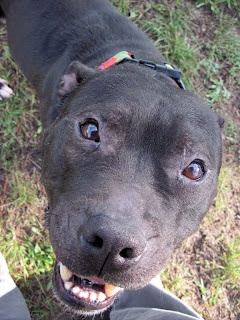 When Chunk came to us from the crap-ass breeder in Ohio, we knew that he'd most likely been used as a stud dog for much of his life. He showed the classic behavior that's so common with puppy mill studs; one track mind with no idea how to relate to dogs outside of, well, you know. A neuter helped curb some of the reproductive drive, but he didn't have a clue as to how to play. Since most homes want dogs that can have one or more dog-friends, it's important to us to socialize our charges as much as possible while getting them ready for adoption. This is where having a group of well-socialized, known quantity dogs is such a life saver. Chunk needs to learn 1) not to hump and 2) how to play. And since he's a rather low-key, middle aged guy who's never done either, it will take very tolerant dogs to bring this out in him. We grabbed video clips of Chunk's progress during short, well supervised play sessions. Here are some of our favorites. With each clip, he learns something new from each dog.

First, Elliot. The loose-bodied malberian's been great for teaching Chunk that dogs are safe, but he's too young to teach him not to hump. That's fine. We wanted some of Chunk's first experiences with dogs to be happy, even if altogether frustrating. 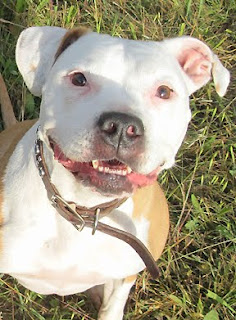 Next, Sally. She takes great pride in correcting dogs that offend her, but without going overboard. We don't employ our senior as much as we used to to socialize dogs since she tends to throw herself into these sessions with so much gusto that she sometimes throws her back out (!) But she told us that she thought Chunk was uber sexy, and was game to teach him some new moves. Immediately, she gave Chunk a few VERY loud and scary corrections for trying to mount her (not shown).
Once he showed a little more respect, in classic Sally fashion, she invited him to play. Chunk's not quite sure what to think of Miss Sally now - which is fine. Being confused at this point is a good lesson for the former stud muffin. We want him to think rather than fall back into old patterns (FYI, We're giving Sally LOTS of praise in this clip because she hates the camera and tends to go on strike when it comes out.)

Below - finally - a decent play session with Lola. He's still trying to mount, but he's also starting to try out some new moves. A few more sessions with a variety of dogs including helpful teacher Lola, and new doors will open for this boy. For now, Chunk will also be getting verbal reminders from us when he falls back into humping, but the dogs are giving him the opportunity to learn and develop a real play style. What would we do without all these wonderful dogs to help us out?

One Caveat: Here's our "don't try this at home" disclaimer. Every dog - especially every under-socialized dog - is going to be wildly different in how much he can tolerate from new dogs. If you've never done new dog-intros, you're wise to mentor with someone who knows how to do them before tossing dogs that don't know each other together. It's not rocket science and it's really fairly easy to read dog body language, but experience is SO much kinder than blind experimentation. So be smart, k?

EDIT BELOW ...and finally, Chunk starts to play. Whew.

Mr. Chunk is learning, I especially loved where Eliot looked like he was going to sit on Chunk's head. My Quizz has had to do that before to less thank mannered friends.

Really good videos.
The "teachers" are so patient.
Poor Chunk.
What a life he must have had before coming to you guys.

wow! what a fantastic post - Chunk is learning so much. Those are three marvelous dogs to teach him, too!

What nice dogs. All of them!

I have a question about the climbing up Sally was doing on Chunk.. Is this considered okay?

I have been gently discouraging my female when she does this behavior during play. Mostly I just try to distract and get the dogs doing something else when I see it coming. Watching Sally do it made me wonder if I am intervening unnecessarily.

i too have a question about sally...
i have a lovely Female pibble...
who likes to exert her dominance on my male border collie from time to time.
its a 2way street - i hump, then you hump... then i hump again.
we break them up as quick as we can, and they return to regular play.
but occasionally the female seems to... 'finish'.
i have been able to find any info about this, she is spayed... but...?

Thanks for your comment Diane. We play it by ear with the humping. Sally's using it to hammer a point home to new-dog Chunk since she's still not 100% comfortable with him and she wants him to know that she's not going to take any funny stuff. That was useful in this situation, so we allowed it and even encouraged it. She's also aroused because he's still got hormones that she finds exciting (it takes a few weeks for a neutered dog's testosterone to drop off). After this play session, she did more humping with Chunk but I asked her to knock it off...Enough razing the youngster already! Sometimes a bitchy girl can get a little carried away with herself. ;-)

She doesn't hump her home-boy Elliot or her other longtime dog friends, btw, because they've got established friendships and rituals worked out. I think you're right on track to distract your girl towards other games. Humping isn't anything to freak out about, but it's stupid play and you don't want your dog to offend the wrong dog.

Anon 5:36 ... Do you mean 'finish' as in climax? Such racey talk! LOL Apparently spaying can increase testosterone levels in female dogs. If that's true, then it wouldn't be a stretch to see behavior that you'd expect from a male.

Poor Chunk, now he knows how the girls treated most of us boys back in high school.

Thanks for the feedback Donna! Much appreciated.

I read the comments a few days ago about Chunk and how he needs to learn to play without humping, and that got me thinking I might not be taking it seriously enough with my own dog.

(I was treating it about the same as when my dog sticks her head in the recycling -- cheerfully "get off him!", and heaps of praise if she listens right away. And, of course, trying to redirect to another activity before the hump even starts!)

The background about Chunk's past life as a breeder and your follow up make a lot of sense.

It seems like Chunk is really blossoming in your program. He looks so much healthier and more relaxed than in the earlier photos.

I love 'em all, of course, but there is something particularly compelling about Chunk.

That's a fine group of dogs to teach the boy some manners. I especially like how Elliot manages to fit ALL of Chunk's head in his mouth. Nice move!

HI Donna,
Just found your blog although I refer adopters to your website all the time. Really like the videos with your comments added. Helpful. At ours shelter we are always trying to find play pals for our pits. Right now we have two young adult male/female players who are both real intense dogs and play hard. They are often up on back legs, biting necks, playing rough. It does not escalate and both dogs are equally committed to the interaction. WE interrupt periodically to tone things down but not sure if this kind of play is counterproductive. Both dogs seem too intense for most dogs and we don't have those great teacher dogs to put them with. I wonder if putting more dogs together would diffuse the intensity or make it worse. Obviously, it would take the RIGHT dogs. Just not sure if we are helping or hurting these two by putting them together. We don't have alot of choices for them right now. The alternative has been to put them out alone in the play yards. Thank you for any thoughts you may have.
Cathy

Hi Cathy. First of all, bravo to you for designing play sessions for your sheltered pit bulls. It makes such a difference in their lives and ease of transition into new homes.

Some of the younger dogs in our corners play really rough, too. We allow it as long as the dogs can be called away into a "Sit" mid-session, and we reinforce with treats to reward for breaking away. In the beginning, we typically have to grab collars and step up in between them to get the break up, but they soon learn the 'game' and it gets a little easier to get compliance as we practice.

It sounds like you have good intuition for your work, so let that be your guide in all things. To help these rowdy youngsters expand their horizons, you might try a cool-down walk after one of their play sessions, and introduce them (individually) to a well socialized dog once they're truly dog tired (but not so tired that they tune out your cues). Start with the obligatory walk together on-leash, then drop the leashes if signals are good. Use lots of voice to direct this interaction, including happy voice to reinforce good signals and practice your 'break away' command so the younger dog knows he's working. Keep them moving if possible by encouraging them to follow you around the yard, rather than bunched up in one spot where they can begin to obsess. In some cases, you may decide to keep the younger dog on leash and let the other dog decide how much interaction he wants. If it doesn't go as well as you'd like, no harm -- you've just learned more about each dog's limits that can help you design future play sessions.

In all things, have fun. When you're having fun, it keeps you loose and that translates lovely messages the dogs.

Tell us how it goes! We love to hear what others are doing with their shelter dogs.