Regardless of which end you look at… 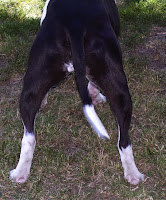 ...you can’t always be certain of what breed of dog you’re looking at. There are a myriad of reasons for not supporting any sort of Breed Specific Legislation (BSL) and just one of them is breed misidentification. Because of my hectic life, I start early in the day and jog with my Pit bull on the waterfront every morning before the sun even thinks of coming up. I have for years. 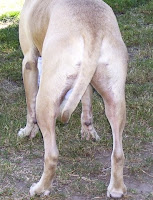 I heard a particularly disturbing story this past weekend. Rumor had it that three Pit bulls “attacked” one of my fellow joggers at 5:30am last week in the very same park that I jog though. The local media wanted the story and was calling around for information. Instead of making assumptions and jumping to conclusions (like the media did), I started asking questions. Seems one dog was large. “How large” I asked. It was 100 pounds. “Well, it probably wasn't a Pit bull” I said. But there were two other smaller dogs, both brown. And when I heard a description of the owner, it clicked. I knew the dogs. I knew the owner. The owner and her Boxers live nearby and she’s also silly enough to start her day in the park at 5:15am.

Nobody but me knew who these dogs were and who they belonged to. This wasn’t a Pit bull attack. Do I defend the breed so dear to my heart? To do that I had to rat out my neighbor. She and her dogs were going to be in a lot of trouble. Of course, without hesitation, I made the right decision. Careless owners with dangerous dogs have to be held accountable for their dog’s actions.

I’ll bet no mention is ever made of this bite incident in the local paper. In these times of Pit bull paranoia, non-pit bulls bites are barely media worthy. What’s important is that dogs are individuals and one particular breed isn’t responsible for all bites. It’s just not about the breed, and BSL is just not going to stop dog bites. But if it’s up to the jogger that got bit last week, all smooth, short coated, muscular dogs are going to be misidentified as Pit bulls and this incident in my own neighborhood highlights but one problem with BSL.

I wonder if even the most Pit bull savvy among us can find the Pit bull on first try in this popular online game from Pit bulls on the Web. For more info regarding BSL, bookmark Understand-a-Bull's great website.
Posted by Linda at 10:09 AM

Just wanted to let you know I just voted for BadRap on the Care2.com website. The shelter with the most votes receives $10,000. Love your website and blog.

I am with you and jogging with my dogs early in the morning. I just moved to the bay area and my pittie girls come down this saturday (from Alaska and I am so excited after a month apart). I have been watching the other dogs and joggers in my neighborhood closely. I am hoping that my girls will make a smooth transition though I have yet to see another pittie in residence.

I'm silly enough (or crazy enough) to take my pit out at 445am, and i find bad owners walking their dogs off-leash every morning. Most people have no idea about leash laws, its sad. I would like to see more signs posted in parks, open spaces and trails. these signs should explain leash laws, why they are necessary and what the cossequences can be.

It drives me crazy when off leash dogs run up to my dog (on leash) and the owner says don't worry he/she is friendly. But what if my dog isn't! One of my dogs (mixed breed) feels very vulnerable when she's on leash and a big dog runs up to her. She will get snarly. My other, a pit, is friendly but if she was challenged or attacked, I don't think she would just roll over.

If people used their brains and acted more responsible, these things wouldn't happen. Maybe it's OK to let your dog run free if you live on a ranch in Montana, but not in a suburban or city park.

On a different note, Zootoo.com is also running a shelter makeover content, plus cash to a rescue with the most points. I will put down BADRAP as my rescue of choice because of the great work they have done for the breed.

The shelter I volunteer at is in first place right now, Liberty Humane Society in Jersey City, NJ. www.libertyhumane.org. We get a lot of Pitbulls, and we do adopt them out after evaluation and screening of potential homes.

You did the right thing by reporting your neighbor. As I am sure you are aware, it if was your dog, your neighbors would be all over you. I live in Illinois and in a suburb of Chicago, a postal carrier was bit by a Beagle and it hardly made the news. Its so sad that our pits get such a bad rap. Everyone who knows my dog just absolutely loves her, she is sweet and has gotten off leash once and encountered several people and dogs and never even so much as growled at them. It just goes to show you that its all about how they are raised. Keep up the good work, your doing a good job.

I agree with you, Ted, about the necessity for leash laws. I spoke to the Police Chief where I used to walk my dog, explained the issue and within a few days, he had the area posted and patroled. I've since changed jobs and now walk my dog in an area with less off leash dogs -- some communities are more fortunate than others in having a higher percentage of responsible dog owners. Educate, educate, educate....we can all help the situation by showing the community we are responsible dog owners and asking for enforcement and posting of the existing leash laws. My pittie girl isn't quite a breed ambassador (but we're working on it), yet she still makes friends and changes minds wherever we go. Don't give up the fight -- our dogs are worth all of the effort!

I just wanted to thank both Michele and the Liberty Humane Society person for voting for BR for the online promotions.

I have to get myself up to speed on those contests (contests?) and find out who's offering those nice prizes. It's so encouraging to see the generosity offered to rescues right now.

Linda, Thanks for the info! I'll admit that I have a lot of catching up regarding BSL, but will study up on the subject. That "pick-a-pit" game was WAY too eazy for Elvez. He got it on the first try! He is such a smarty pants. In my biased opinion, BadRap is one of the TOP DOGS for Pit Bull education and rescue.

There was an event with $5000 grants at Petfinder but it has been discontinued due to some irregularities in voting.

[quote]Hey, Where Is the Voting Feature for the Extra $5,000 Grants?

We regret to inform you that we have had to discontinue the voting for this event due to, shall we say, "VERY DEDICATED" shelter fans who have managed to skew the voting through the use of "clever" software tricks.[/quote]


But there are some Generators being donated for Disasters by Honda.I don`t know how you get in on that.


You can read about it here
http://www.petfinder.com/disasterprep

Welcome to the neighborhood Kari! Don't worry, there are pit bulls in RWC and all over the peninsula.

Thanks for the welcome and all the help with my questions as I've been going through the move! I can't wait for tomorrow when the girls finally get here (thankfully much earlier than originally planned). Hopefully I will start seeing more pitties in RWC once I am out and about with mine :)

Here`s where you can vote for BadRap in the Animal Rescue Site $100,000 Challenge.

I think you did the right thing here and its said that you are right: there probably will be no media coverage simply because it WASNT a pittie bite situation. Its so annoying. The media makes the problem so much worse.